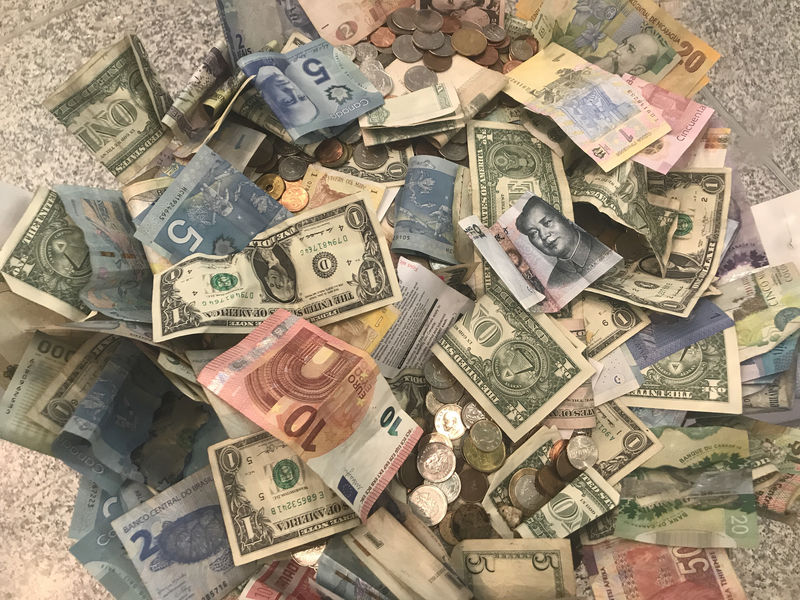 LONDON (Reuters) – Global foreign currency debt – where the rest of world borrows in dollars, euros or Japanese yen – has hit a record high of over $16 trillion, data from the Bank for International Settlements showed on Thursday.

The figures from the Swiss-based central bank umbrella group showed U.S. dollar credit to “non-bank” borrowers outside the United States grew by 4% year-on-year at end-June 2019 to reach $11.9 trillion.

Foreign currency credit denominated in euros and Japanese yen expanded at a faster pace, growing at annual rates of 9% and 8% and taking their respective totals to 3.4 trillion euros ($3.78 trillion) and 49.4 trillion yen ($453.88 billion).

That marks a new record for euro-denominated borrowing following 20 years of broadly steady growth, but yen borrowing has been more variable and remains comfortably below 2007-09 and 2000-02 levels.

(For an interactive version of the below chart, click here https://fingfx.thomsonreuters.com/gfx/editorcharts/GLOBAL-MARKETS-DEBT/0H001QXG796N/index.html)

Foreign currency borrowing is particularly common in emerging markets as it can work out cheaper and is a way of attracting investors who do not want the risk of a potentially volatile local currency.

The downside for the governments or firms that issue the debt though is that it can become painfully expensive to service if their own currency falls, as various crises from Argentina to Mozambique have shown over the years.

Emerging economies now have a record $3.74 trillion in dollar debt, the BIS data showed, despite the annual growth rate slowing to 2% from its recent peak of 8%.

Africa and the Middle East continued to expand at a rapid annual pace of 11% though, Latin America expanded by 3% year-on-year including 9% in Mexico and 8% in Chile, which more than offset the 4% and 1% contractions in Argentina and Brazil.

The latest decline was led by a 14% drop in lending to borrowers in Russia. Credit to Asia-Pacific also contracted, albeit at a slower annual rate of 1%. That was mainly driven by a 6% decline to non-bank borrowers in China which compared with an 8% rise at end-2017.

The growth rates of the two main components of foreign currency U.S. dollar credit – bank loans and debt securities such as bonds – continued to move in opposite directions.

For most of the post-Financial Crisis period, growth in U.S. dollar-denominated debt securities was higher than that of bank loans.

However, recently the trend has reversed: the annual growth rate of U.S. dollar bank loans outpaced that of securities for a second quarter in a row, 5% for loans versus 3% for debt securities at the end of June.