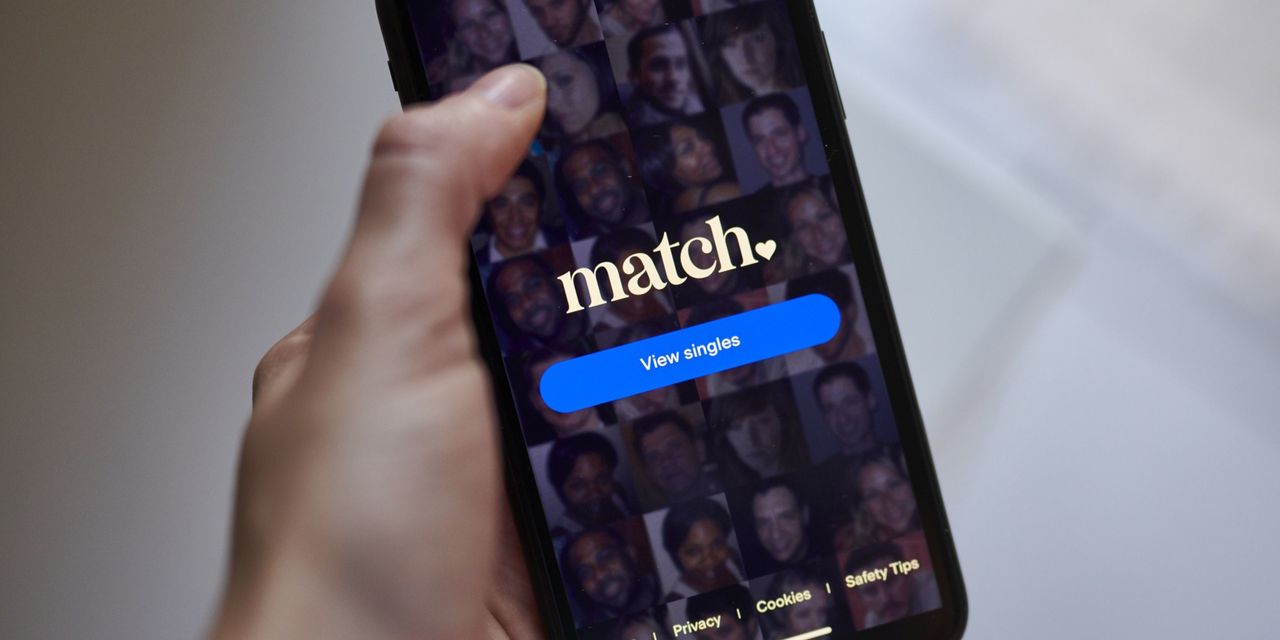 Match Group Inc. shares were pummeled Tuesday after the online-dating company’s new chief executive detailed a slowdown for its most popular product, Tinder, and decided to pause newer initiatives such as Tinder-based crypto and “metaverse” dating.

Analysts on average expected earnings of 57 cents a share on sales of $804 million, according to FactSet. Shares fell more than 20% in after-hours trading immediately following the release of the results, after closing with a 4.3% gain at $76.71.

A large reason for the surprising loss was a writedown of $217 million on the acquisition of Hyperconnect, an Asian dating company attempting to integrate “metaverse” features. Match paid more than $1.7 billion for the company last year, but new Chief Executive Bernard Kim said that he is slowing down development and spending.

“I believe a metaverse dating experience is important to capture the next generation of users, and Hyperconnect has been innovating in this area. However, given uncertainty about the ultimate contours of the metaverse and what will or won’t work, as well as the more challenging operating environment, I’ve instructed the Hyperconnect team to iterate but not invest heavily in metaverse at this time,” Kim wrote in a letter to shareholders Tuesday. “We’ll continue to evaluate this space carefully, and we will consider moving forward at the appropriate time when we have more clarity on the overall opportunity and feel we have a service that is well-positioned to succeed.”

Match has grown steadily for years thanks to growth in paying users for Tinder, but that effort has also hit a speedbump. Kim said that Tinder CEO Renate Nyborg is leaving, and he will “be fully embedded within the team at our main Tinder office in L.A. to oversee business progress until the search is complete.”

One of his first moves: Scuttling the introduction of cryptocurrency-like rewards on the platform.

“After seeing mixed results from testing Tinder Coins, we’ve decided to take a step back and re-examine that initiative so that it can more effectively contribute to Tinder’s revenue,” Kim said in the letter. “We also intend to do more thinking about virtual goods to ensure that they can be a real driver for Tinder’s next leg of growth and help us unlock the untapped power users on the platform.”

Kim did not provide hope that Match’s struggles would turn around in the near term. For the third quarter, he guided for revenue of $790 million to $800 million, roughly flat from both a year-over-year and quarter-over-quarter perspective. Analysts on average expected third-quarter revenue of $883 million, according to FactSet.

The news for the end of the year wasn’t much better, though Kim hopes that Match can cut back on marketing and hiring enough to help the bottom line.

“In Q4, we expect limited improvement in year-over-year top-line growth rates compared to Q3 with the teams focused on execution against the current product initiatives leading into 2023. We expect margins to improve modestly as we remain disciplined on marketing spend and hiring,” he wrote.

Match Group executives expect to hold a conference call at 8:30 a.m. Eastern on Wednesday to discuss the results.