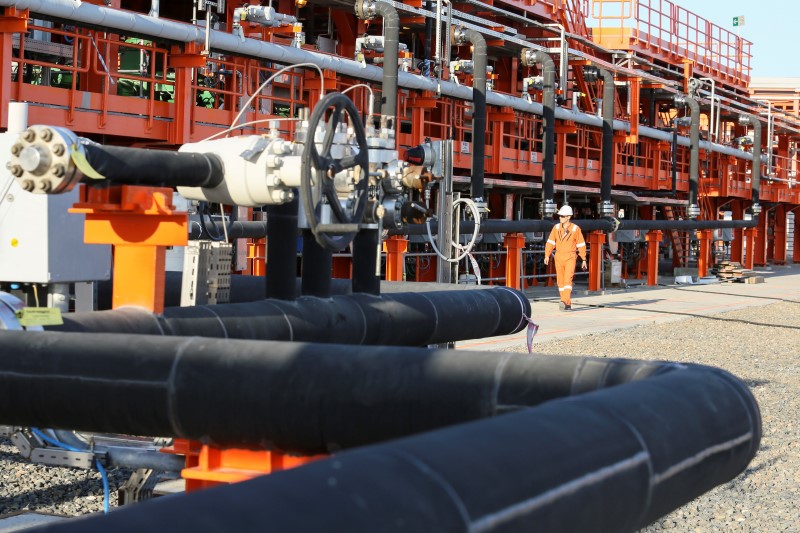 NEW YORK/LONDON (Reuters) – U.S. Treasury yields paused their ascent on Monday as oil prices skidded by more than $8 over fears of weaker Chinese demand, while the yen suffered its biggest daily fall since 2020 as Japan’s central bank stood in the way of higher yields.

World stocks were largely flat, holding their ground for now despite expectations that another brutal sell-off in major bond markets is on the cards.

In Japan, a steadfast attempt by the central bank to defend its 0.25% yield cap by vowing to buy an unlimited amount of government bonds for the first four days of the week sent the yen reeling to a six-year low.

By late morning, MSCI’s gauge of stocks across the globe was little changed, down just 0.08%.

In the United States, the Dow Jones Industrial Average lost 0.38%, the S&P 500 was unchanged, and the Nasdaq Composite added 0.43%.

The Japanese yen shed 1.15% versus the greenback to 123.47 per dollar, the highest for the dollar since August 2015 and the biggest one-day rise since March 2020. Yen losses in March surpass 7% and the currency is set for its biggest monthly and quarterly falls since 2016.

Japan should intervene in the currency market or raise rates to defend the yen if it weakens beyond 130 to the dollar, the country’s former top currency diplomat Eisuke Sakakibara said.

Risk sentiment was helped by hopes of progress in Russian-Ukranian peace talks due in Turkey this week after President Volodymyr Zelenskiy said Ukraine was prepared to discuss adopting a neutral status as part of a deal.

“Sentiment has been surprisingly resilient in stock markets, which are buying positive headlines from the war in Ukraine,” said Jan von Gerich, chief analyst at Nordea.

“The repricing that continues at the short end of the U.S. yield curve is taking place really fast and without any consequences for Wall Street at the moment.”

Expectations that the Fed could push harder and faster to tame inflation drove two-year Treasury yields to their highest levels since early 2019 at 2.41%.

Ten-year yields briefly rose to new highs above 2.5%. And one measure of the U.S. bond yield curve – the gap between five and 30-year Treasury yields – inverted for the first time since 2006 in a sign concerns over growth are growing.

“My feeling is the long end of the curve indicates slower growth ahead (rather than recession),” said Mizuho senior economist Colin Asher.

“A day of reckoning is coming because at the start of April you have earnings season and you will get a sense of the impact of rising energy prices and guidance for the future,” he said

“I would not bet on the rally continuing in a straight line,” Savary added.