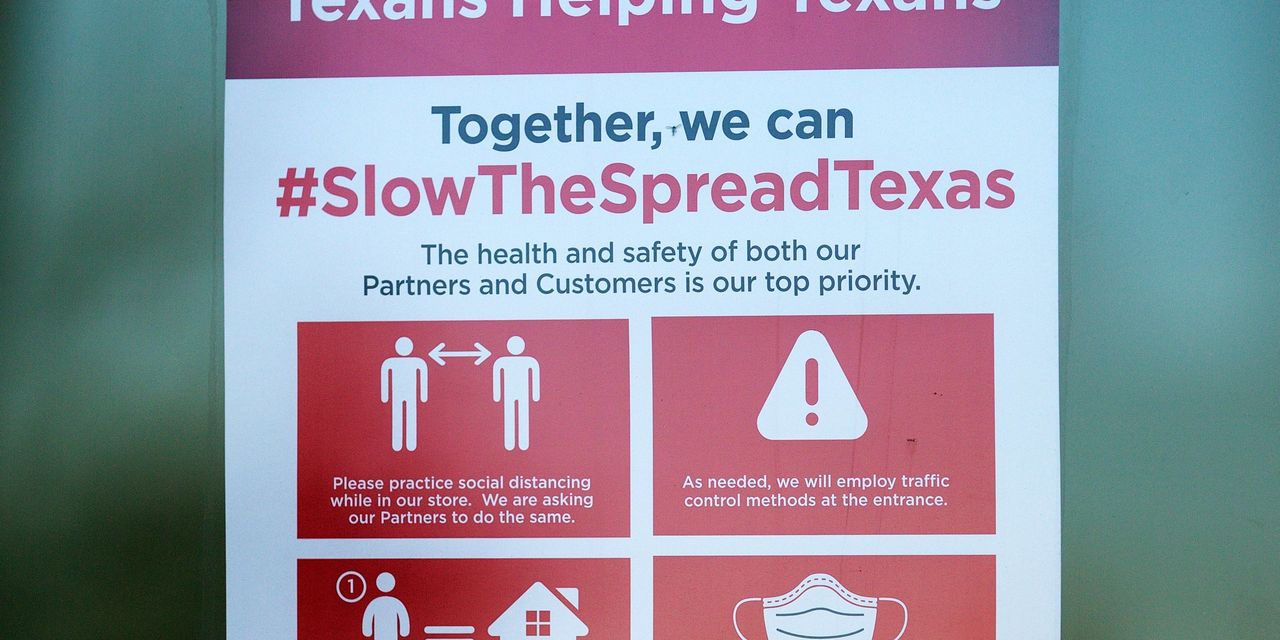 The highly transmissible delta variant of the coronavirus-borne illness COVID-19 has driven the daily average of new cases in the U.S. above 100,000 for the first time since February and created a crisis in Austin, Texas, where hospitals are running out of intensive care unit beds.

The U.S. seven-day average of new cases stood at 110,360 on Sunday, according to a New York Times tracker, up 112% from two weeks ago. Hospitalizations have climbed 90% and deaths are up 92% in the period.

And while case growth is starting to slow in recent hot spots that were being crushed by low vaccination rates — most of the news cases, hospitalizations and deaths are in unvaccinated people — others are experiencing surges.

Missouri, Nevada and Arkansas are among the former, while Florida and Louisiana belong to the latter group, and both have set seven-day cases records recently. Florida’s hospitalization rate is about the same as the peak last summer and in Louisiana more young adults are getting severe COVID.

Don’t miss: ‘I don’t want to lose you’: How families approached their loved ones about the importance of getting the COVID-19 vaccination

In Austin, officials are warning of catastrophe as cases climb fast and intensive care unit beds are reduced to six remaining beds, the Guardian reported. Local government has urged residents to stay home, wear face masks in public setting and to get vaccinated. Austin Public Health has elevated its risk-based guidance to the highest level of state 5, the paper reported.

“The situation is critical,” Desmar Walkes, Austin-Travis county’s health authority, said in a statement. “Our hospitals are severely stressed and there is little we can do to alleviate their burden with the surging cases.”

Those efforts are not being helped by Texas Gov. Greg Abbott, who like Florida Gov. Rick DeSantis, has issued an order restricting vaccine and face mask mandates, with DeSantis even threatening to withhold school funding if they insist on children wearing face masks.

See now: Florida or Floriduh? As it battles COVID-19 surge, the Sunshine State proves itself as weirdly defiant as ever.

In a reversal, the head of the American Federation of Teachers said Sunday she now supports vaccination mandates for teachers before they return to classrooms this fall, to protect younger students.

“I do think that the circumstances have changed, and that vaccination is a community responsibility and it weighs really heavily on me that kids under 12 can’t get vaccinated,” Randi Weingarten told NBC News’ “Meet the Press” on Sunday morning.

Dr. Anthony Fauci, meanwhile, said he’s hopeful the Food and Drug Administration will give full approval to the coronavirus vaccine by month’s end and predicted the potential move will spur a wave of vaccine mandates in the private sector as well as schools and universities, the Associated Press reported.

See also: Moderna presses for COVID-19 boosters as federal health officials warm to an extra dose for some people

The head of the National Institute of Allergy and Infectious Diseases and President Joe Biden’s chief medical adviser, said it’s key to “go the extra step to get people vaccinated.”

The Centers for Disease Control and Prevention’s vaccine tracker is showing that 166 million Americans are fully vaccinated, equal to 50.1% of the overall population. That means they have had two doses of the vaccines developed by Pfizer
PFE,

or Moderna
MRNA,
,
or one shot of Johnson & Johnson’s
JNJ,

one-dose vaccine, the only three to have received emergency use authorization so far.

Among adults 18 years and older, 61.1% are fully vaccinated and 71% have received at least one dose. But rates vary from state to state and some still have less than 50% of their residents vaccinated.

Elsewhere, the city of Wuhan in China, where the coronavirus first emerged in late 2019, has tested all 11 million of its residents after a fresh outbreak of cases, AFP reported. By Saturday, the city had recorded 37 locally transmitted Covid-19 cases and found 41 local asymptomatic carriers in the latest round of mass testing, Xinhua reported.

In Japan, Tokyo, the site of the recent Olympic Games, has recorded a record of 2,884 new COVID cases in a single day on Monday, according to The Asahi Shimbun news site.

Iran set a record death toll on Sunday at 542, and logged more than 39,600 new cases, according to the AP. Iran has been fighting the most severe surge of the virus that has exceeded the previous peak last November.

Canada has reopened its border to fully vaccinated Americans, CNN reported. To be considered fully vaccinated, travelers must have received the full series of a Covid-19 vaccine — or combination of vaccines — accepted by the government of Canada at least 14 days before entering Canada.

The global tally for the coronavirus-borne illness headed above 202.8 million on Monday, while the death toll climbed above 4.29 million according to data aggregated by Johns Hopkins University.

India is second by cases at 31.9 million and third by deaths at 428,309 according to its official numbers, which are expected to be undercounted.

Brazil is second in deaths at 563,151, but is third in cases at 20.2 million. Mexico has fourth-highest death toll at 244,420 but has recorded just 2.9 million cases, according to its official numbers.

In Europe, Russia continues to pull ahead of the U.K. by deaths at 162,860, while the U.K. has 130,630, making Russia the country with the fifth-highest death toll in the world and highest in Europe.

China has had 105,904 confirmed cases and 4,848 deaths, according to its official numbers, which are widely held to be massively underreported.