Home
Stocks
The Tell: Value stocks are making a comeback. Don’t get left behind, these analysts say
Prev Article Next Article

After a 14-year stretch of outperformance for growth stocks compared to value, investors seem to finally be rewarding the left-behind names. That makes sense: value sectors tend to do better at the start of an economic cycle, after all. But there have been several value head fakes over the years, and growthier names grab more headlines.

Still, one analyst team says the rotation is for real — and there’s still upside left.

“We still see more upside in value relative to growth over the next 12 months given value’s dramatic longer-term underperformance as well as the U.S. economy being on the cusp of the best growth in more than 35 years,” they added. “It would not be unusual to see value consolidate some of its recent outperformance, but we would stick with the value trend and use any short-term setbacks to add to the position.”

See: ‘Goldilocks’ funds? Midcap ETFs may be about to have their moment

Value stocks have rallied in recent weeks, the analysts acknowledged, but according to one metric, there’s still room to run.

“Our work suggests that greater upside remains in the pure value style,” they write, which has more of an allocation to financials XLF, -1.79% and energy XLE, -3.21%. Pure value has trailed the S&P 500 SPX, +0.17% by 30 percentage points over the past three years, and forward earnings look much more attractive than the broader market does. 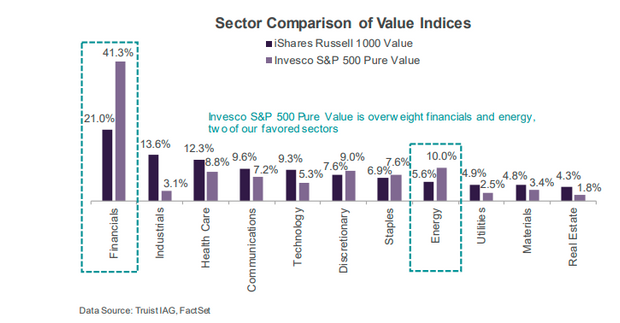 “Catch up potential remains,” the analysts concluded, especially if the economic rebound is as strong as forecast.

On Monday, all major stock benchmarks were trading near flat, with a slight edge for the growth- and tech-oriented Nasdaq Composite index COMP, +1.09%.