Shares of General Electric Co. took another dive Thursday, putting them on track to suffer the biggest decline in nine months, as analysts gave a mixed review of the industrial conglomerate’s Analyst Day and GECAS deal.

The stock GE, -8.24% dropped 8.4% in afternoon trading, which would be the biggest one-day since they fell 8.7% on June 11, after slumping 5.4% on Wednesday in the wake of the deal announcement and analyst event.

Since the stock closed at a near three-year high of $13.60 on March 8, it has now tumbled 14.3% amid a three-day losing streak, also the worst three-day performance in nine months.

The stock’s extended selloff comes after GE announced a $30 billion deal to combine its aircraft leasing business (GECAS) with AerCap Holdings NV AER, +9.32%, and surprisingly proposed a 1-for-8 reverse stock split. The company also said what remained of its GE Capital business, after the GECAS deal, would be incorporated into GE Industrial, and provided updated financial guidance at its Analyst Day event. Read more about GE’s moves on Wednesday.

Deutsche Bank analyst Nicole DeBlase raised her stock price target to $14 from $13, amid an improved outlook for free cash flow (FCF) in 2022 and 2023 to match management’s guidance. She reiterated the hold rating she’s had on the stock for at least the past two years, citing the lack of upside to her price target.

Although DeBlase “did not find many surprises” in GE’s outlook for this year, she believes “positioning/expectations were a major component” of the stock’s subsequent trading action.

“GE has been a consensus long amongst hedge funds for several months now, and remains a favorite way to gain exposure to the ‘reopening’ trade, given the importance of the Aviation business to both [earnings per share] and FCF,” DeBlase wrote in a note to clients.

After a quarterly record 73.4% surge in the fourth quarter, DeBlase said the stock had been the top performer among its peer group this year, “so we do not think expectations can be described as low going into the event.”

Other than valuation, she said heard some other “not-so-positive” feedback, including questions over the timing of the GECAS deal given it occurred during the cycle trough, and that the deal was a “sneaky” way to write down GECAS assets. 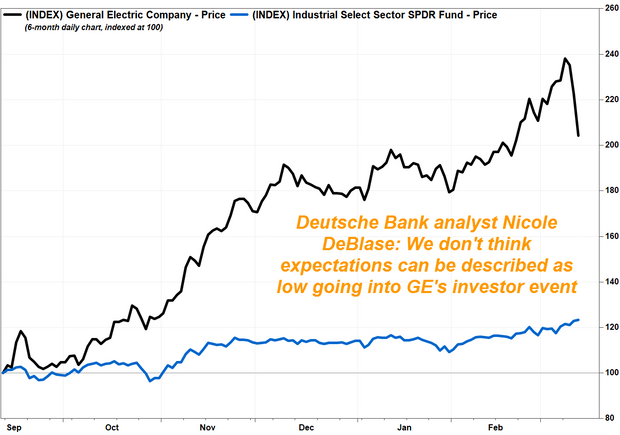 Oppenheimer analyst Christopher Glynn said the deal and guidance puts GE on a “solid” foundation, as it improves capital efficiency and comes amid expectations that a “solid recovery” is underway in Aviation.

But Glynn also expressed concerns over valuation, as he cut GE’s rating to perform, after being at outperform since November, while removing his price target. He said his downgrade was based on valuation, given the stock had surpassed his previous price target of $13.

Glynn wrote that “some substantial turnaround execution and cyclical recovery” is already “priced in at current levels,” but said the extended duration of the debt structure and strong liquidity now afford GE with “a backdrop to emerge from the Aviation downturn in a position of resilience.”

Meanwhile, longtime bear/skeptic Stephen Tusa at J.P. Morgan reiterated the neutral rating he’s had on GE for the past year, but said he still sees “material downside” for the stock, as per his $5 price target, which is 59% below current levels.

Tusa said that while he agrees that a simplified GE following the GECAS deal is a positive, he said the deal and the financial outlook has just “crystallized” for him the “real bear case” for the stock.

With GECAS no longer in the picture, Tusa said there are no longer GE Capital assets around for Wall Street bulls to argue that there is enough value/equity to support related debt.

“Bottom line, with the free money from the [COVID-19] vaccine trade booked, the narrative of GE as a turnaround gaining traction with a V-shape in cash and earnings is running into the numbers that show sustainably high leverage well above targets despite [more than] $70 billion in actions on tope of fundamentals we would characterize as mixed with expectations on future earnings that remain too high,” Tusa wrote.

UBS’s Markus Mittermaier was a little more forgiving, however, as he reiterated the buy rating he’s had on GE since December 2019 and his $15 stock price target, which implies a 24% gain from current levels.

He said that despite the near-term “hits” to FCF, simplification following the GECAS deal is “a clear positive strategically.” He said for the very near term, he understands the “negative interpretation” of some of the elements of the deal and outlook, such as the hit to 2021 FCF to further reduce the factoring balance, as well as the increase to net debt from incorporating GE Capital into GE’s balance sheet.

“That being said, this has not taken away the overhang from future factoring unwinds, further de-risked the aggregate debt picture which we believe will make investors increasingly willing to ‘underwrite’ the new GE that is emerging, which should help multiples,” Mittermaier wrote. “On balance, we think [Wednesday] was an important step into creating a simpler GE with significantly less ‘legacy overhangs’ and improved strategic optionality medium and long term.”

GE’s stock has rallied TK% over the past 12 months, while the SPDR Industrial Select Sector exchange-traded fund has advanced TK% and the S&P 500 index has climbed TK%.