Home
Stocks
: Visa is eyeing the opportunity beyond checkout — and estimates it’s worth $185 trillion
Prev Article Next Article 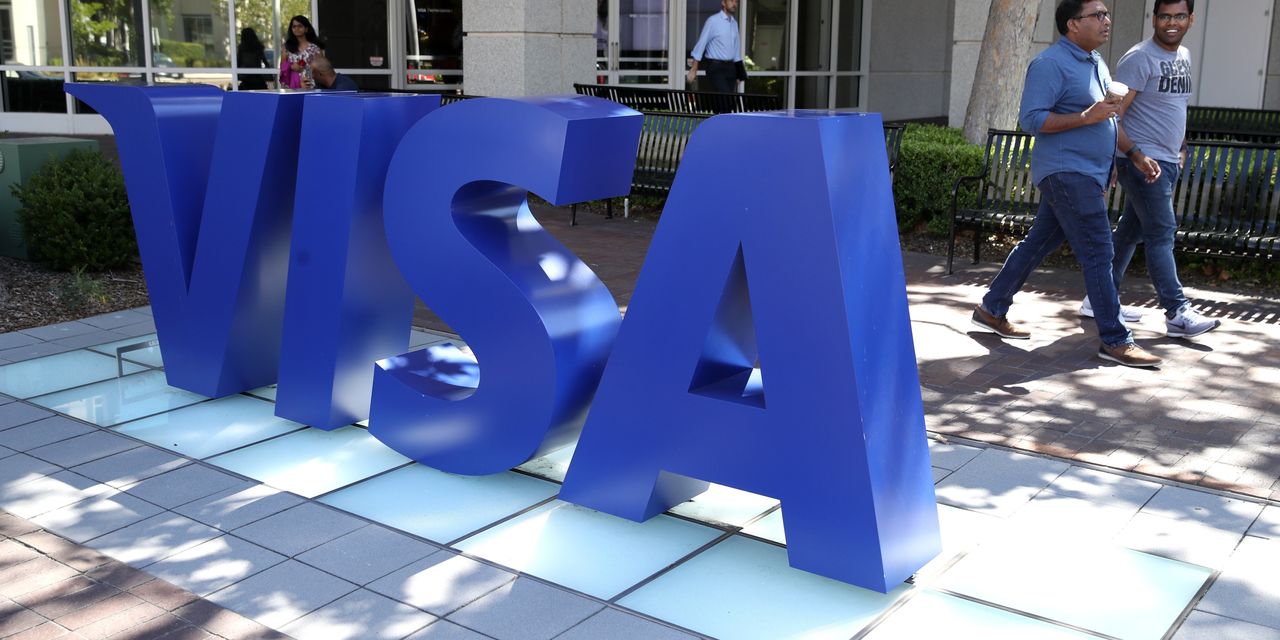 The COVID-19 crisis has sped up the adoption of digital payments, part of a transition that Visa Inc. argues could help it tap opportunities worth many times more than the market for retail payments.

While Visa V, +2.02% is best known for its plastic credit and debit cards, the company has been making a push into other elements of the payments universe, including cryptocurrency services as well as disbursement technology that enables things like on-demand payouts to gig-economy workers. The company sees new payment flows as a way to get in on $185 trillion worth of money moving outside the checkout landscape, its president Ryan McInerney told MarketWatch, dwarfing the already sizable opportunity that exists in converting the $17 trillion of cash currently in circulation over to cards.

Part of Visa’s strategy to capitalize on new types of money movements was its planned $5.3 billion purchase of Plaid, a company that enables users to link their bank-account credentials with popular platforms like PayPal Holding Inc.’s Venmo. Visa and Plaid called off that deal earlier this year following pushback from the Department of Justice, but Visa has maintained that it can still expand into new payment opportunities without the merger, in large part by leveraging its Visa Direct platform.

Visa Direct makes use of the company’s card rails to send payments almost in the reverse of how transactions usually take place. Consumers are familiar with using their cards to pay for things, but Visa Direct makes it so people can use the company’s infrastructure to get paid themselves, whether by employers, friends, government agencies, insurers, or other parties. Its growth has been “like a rocket ship,” McInerney said, with 3.5 billion transactions processed during the company’s last fiscal year, up from about 2 billion a year before.

The pandemic has brought increased attention to Visa Direct, including by government officials in Guatemala who were looking to get money to citizens more quickly during the crisis without only relying on paper checks or direct deposits.

Visa’s work with governments to distribute COVID-19 relief funds “led to conversations about how we can use the Visa platform in an ongoing way to get money to citizens,” McInerney said, with Visa also offering prepaid cards through which governments can make disbursements. “It’s another example of a rotation that’s happened in the pandemic that I think will lead to digitization of large chunks of money movement.”

Visa Direct also plays into the new ways that people are tipping workers during the pandemic. Hairdressers in the U.S. who once received cash tips are now increasingly taking in tips via platforms like PayPal Holdings Inc.’s PYPL, -3.06% Venmo, for example, and Visa’s technology helps those workers instantly transfer those funds to their bank accounts afterward if they choose.

In Russia, where customers can’t usually add tips on top of card payments because most transactions take place with a contactless card tap, a popular booking service in the beauty industry is using Visa Direct to let customers leave tips through its platform, McInerney said.

These newer behaviors are expected to persist once the pandemic subsides, in McInerney’s view, while slightly older applications of Visa Direct like gig-economy payouts could see a snapback. Gig workers often lean on the technology when they request on-demand access to their earned wages at the end of a shift, and though the ride-hailing industry has stalled during the COVID-19 crisis, it’s likely to pick up again once people feel more comfortable traveling and sharing spaces.

The company argues that Visa Direct gives it the ability to attack $60 trillion to $70 trillion in new types of “money movement” overall, and MoffettNathanson analyst Lisa Ellis recently pegged the revenue potential of Visa Direct for remittances and disbursements at $60 billion to $120 billion. Visa captures perhaps only 1% of that opportunity currently, she estimated.

Ellis hailed the Visa Direct technology and a similar iteration from rival Mastercard Inc. MA, +2.02% called Mastercard Send as “the single most disruptive new capability the networks have rolled out in the past decade, at least.”

Visa’s embrace of newer payment opportunities also extends into cryptocurrencies, where the company has been working with crypto wallets to issue Visa cards that let people spend their holdings and rolling out software application program interfaces (APIs) for financial-institution clients that want to offer crypto buying services to their customers.

“If you’re a Coinbase client and you have a bunch of bitcoin and you want to go out for dinner, you don’t want to go through the conversion process so Coinbase gives you a Visa card and says we’ll handle the conversion for you,” McInerney said of the company’s card-issuing partnerships Coinbase and about 35 other cryptocurrency platforms.

Visa recently announced that it would soon start allowing financial institutions to settle transactions with Visa in stablecoins, a type of digital currency, which the company said would allow its partners to receive payments from Visa in digital currencies and pay their merchant customers that way if they wanted.

The company hasn’t yet followed suit with Mastercard, which announced earlier this month that it planned to start allowing merchants to accept some cryptocurrencies directly, something PayPal is doing as well. McInerney declined to share too much about Visa’s future crypto endeavors, only to say that “if the crypto space is going to take off,” Visa wants to be “the best crypto partner of choice” for players in the industry.

Visa Chief Executive Al Kelly said on the company’s earnings call last month that “to the extent a specific digital currency becomes a recognized means of exchange, there’s no reason why we cannot add it to our network, which already supports over 160 currencies today.”

Outside of cryptocurrencies, Visa is also trying to attack the big opportunity it sees in commercial payments that ordinarily take place by check or bank wires and bypass the card networks.

The company estimates that there’s $120 trillion of fund movement that takes place between businesses, including $10 billion occurring between businesses sending money across borders. For that, Visa runs a platform called B2B Connect that enables transactions between bank accounts in a way that Visa says is more quick and transparent.

“There hasn’t been a lot of innovation in that space today,” McInerney said, so it represents one of several “big opportunities to grow new flows onto the Visa network.”

*Editors note: This story has been updated to clarify the details of Visa’s work with governments to employ Visa Direct for disbursement payouts. The program discussed in this story was in Guatemala, not the Dominican Republic.