Home
Stocks
Mark Hulbert: Inflation is rising and so are investors’ fears about stocks
Prev Article Next Article
This post was originally published on this site

If inflation is a threat to the stock market, we should be running scared. That’s because inflation expectations have spiked dramatically in recent weeks. The 10-year breakeven inflation rate — what the bond market currently is betting inflation will average over the next decade — is now higher than it’s been in five years.

As you can see from the accompanying chart, expected 10-year inflation stood at just 0.50% last March; this past week it got as high as 2.24%. 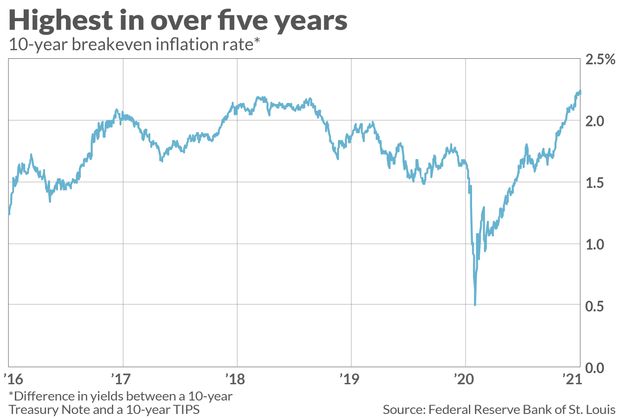 In truth, inflation is not the threat to the stock market that most investors believe. If inflation continues to heat up in coming months and investors react by dumping stocks, you might want to consider it as a buying opportunity.

These are the conclusions I reached after interviewing Richard Warr, a finance professor at North Carolina State University. Warr co-authored a seminal 2002 study in the Journal of Financial and Quantitative Analysis which found that equities actually are a good long-term hedge against inflation. His co-author was University of Florida finance professor Jay Ritter.

Warr explained that stocks are a hedge because inflation impacts equity valuations in two ways which largely offset each other:

Notice the small net effect of these two factors: Nominal earnings will be higher but must be more heavily discounted. This isn’t just theory, by the way: Over the last 150 years, real (inflation-adjusted) growth rates for the S&P 500’s SPX, -0.44% earnings per share have remained relatively stable in the wake of changes in the inflation rate, while nominal EPS growth rates have tended to rise and fall in line with those changes.

Investors typically focus on just the first of these two consequences of inflation, Warr said. That is, they (at least implicitly) realize that inflation reduces the value of future nominal earnings, but overlook that those nominal earnings will themselves be higher. This lopsided view is due to a trait that economists call “inflation illusion.”

This illusion works to be the benefit of stocks when inflation is declining. When that is the case, investors extrapolate into the future the artificially high nominal earnings growth of earlier higher-inflation periods. The result is unreasonably high valuations.

When inflation begins to rise, in contrast, investors make just the opposite mistake: They extrapolate into the future the lower earnings growth firms produced during the previously low-inflation period. This leads them to conclude that equity valuations must come down as inflation heats up.

Notice that two distinct models of investor behavior are needed to explain the market’s reaction to higher inflation. The rational model shows that inflation should have little net impact on equity valuations, while the behavioral model predicts that investors will nevertheless behave irrationally.

Might investors have learned from their past irrationality, and therefore not dump stocks if inflation heats up even more in coming months? Warr said that, while anything is possible, he wouldn’t bet on it. “Most current investors have lived most of their lives in a low-inflation environment, so they have had no opportunity to learn the lessons that history teaches us about inflation and the stock market.”

If Warr is right, then rational investors in coming months will have an opportunity to pick up stocks at lower valuations.