Home
Stocks
CityWatch: ‘If a delivery fee is 30%, do the basic math!’—Struggling restaurants are being choked
Prev Article Next Article

Thanks so much for your food-delivery order. That AmEx charge of yours is helping to keep a beloved restaurant alive in this dark winter of COVID-19.

How much of last night’s Thai-food bill was siphoned off by Grubhub GRUB, +0.71%, DoorDash DASH, -0.01%, Postmates or one of the other big-name delivery apps? Depending on where you live and whether the restaurant is an independent or a chain, it could be 20%, 30% or even 40% — and that’s not including the nice tip you tacked on for the delivery person. Despite efforts by some cities to rein in the most brutal of these third-party delivery charges, struggling restaurants are still being choked just when they can afford it least.

“If you order a $10 cheeseburger, you’re probably paying $15 for that cheeseburger,” Rustan Lundstrum, who owns the Coach Meeting House in Oyster Bay, Long Island, told an interviewer this week. “We’re getting $7” to cover food costs, rent, employees, insurance and everything else it takes to run a restaurant. “If a delivery fee is 30%, do basic math! It’s hard to make any money.”

But paying steep app ransoms isn’t a restaurant’s only route to tech-savvy food delivery. A Los Angeles-based delivery platform is pitching a far-gentler, flat-fee monthly subscription model to struggling restaurants across the country — and moving rapidly into New York City, America’s undisputed capital of “bring it to me now.”

“Most people have no idea how badly their favorite restaurants are being squeezed, especially now,” said ChowNow co-founder and CEO Christopher Webb. “The food shows up 45 minutes later. It’s ‘OK, let’s eat.’ They don’t realize how expensive that experience was for the restaurant and for the diner.” Service fees. Delivery fees. A fat percentage off the top. They’re all tacked on, some absorbed by the restaurant, some passed on to the customer. The restaurants get socked even more if they want high visibility on the app’s food-ordering site.

“It was all a little less painful when takeout was 20% or 30% of the business,” Webb said. “But this year, where 100% of the revenue in many cases is takeout, restaurants have been more vocal in highlighting the problem.”

Also see: Vaccines, though hugely welcome, come too late for many

Now through May — maybe longer if the coronavirus crisis persists — Webb’s company is offering something new: free access to its full suite of delivery software for restaurants in New York, Long Island and New Jersey. That means unlimited, commission-free orders through the ChowNow app and website and full access to the restaurants’ own customer data, which is often withheld by third-party delivery apps.

“It’s a critical time for restaurants,” Webb said. “We can empower them with the tools they need to connect with their communities — and let them keep the money they bring in.”

And what’s in it for ChowNow? Future customer loyalty, the potential to offer add-on services to the restaurants and, most crucially, a larger foothold against entrenched competitors in all-important New York.

Now 39, Webb spent his 20s in Manhattan doing time at Bear Stearns, Lehman Brothers and RBC Capital Markets before learning something about the food business as a founding investor in the healthy fast-casual chain Tender Greens. He and Eric Jaffe, a commercial real-estate investor, launched the ChowNow platform in Los Angeles in March 2012. They made a big splash in Chicago, Grubhub’s home turf, and have kept moving east. 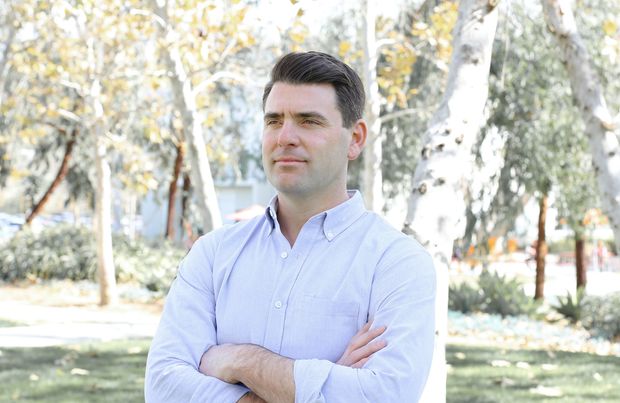 Chris Webb is CEO and co-founder of ChowNow.

Several cities, including Baltimore, Minneapolis and New York, have passed rules trying to limit the online delivery fees, at least temporarily, brushing aside stiff opposition from the delivery platforms. New York City’s current 20% cap, pushed by City Council members Mark Gjonaj and Francisco Moya, is supposed to remain in place until 90 days after restaurants are allowed to resume indoor dining at 100% capacity. Then, it’ll be open season again. Webb hopes ChowNow will be unshakable by then.

Also see: Here are some ways you can support small businesses during the holidays

Independent restaurants, he noted, have had it especially tough. They lack the bargaining leverage of Applebee’s, Chili’s and other large chains to secure discounted fees. And customer data is especially important, he said, as a restaurant tries to grow its delivery business.

“In many cases,” Webb said, “these companies keep the data, don’t share it and incentivize the customer to operate only through the app, knowing the restaurant has to give up a share of every, single order. And if a restaurant says, ‘I don’t want to pay that. I’ll do it on my own,’ they don’t get the data. They leave empty-handed.”

Ellis Henican is an author based in New York City and a former newspaper columnist.