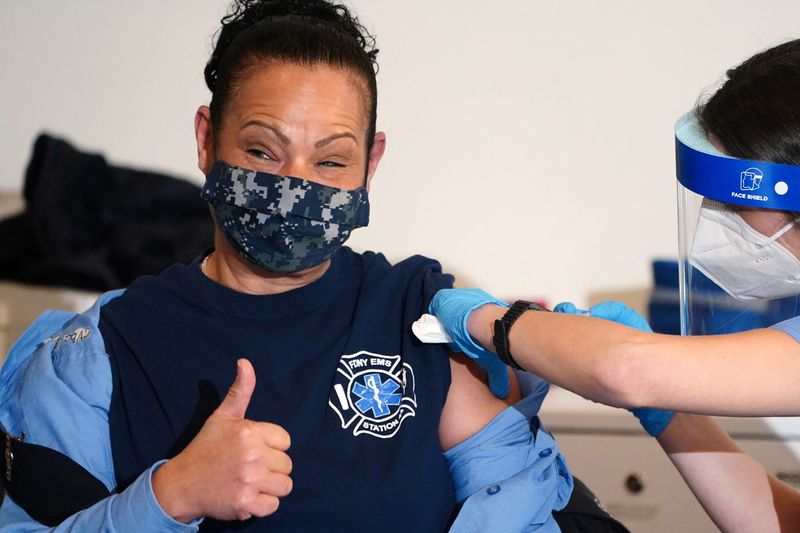 NEW YORK (Reuters) – Tennessee emerged on Wednesday as an epicenter of the latest COVID-19 surge as U.S. political leaders sought to guard against a highly contagious variant sweeping across Britain.

The southern state averaged nearly 128 new infections per 100,000 people over the last seven days, the highest state rate in the country, according to U.S. Centers for Disease Control and Prevention data. It was followed by California at 111 new cases per 100,000 residents.

“Our state is ground zero for a surge in COVID-19 and we need Tennesseans to (do) their part,” Tennessee Governor Bill Lee said on Twitter with a graphic stating: “Tennessee cannot sustain another holiday surge.”

Public health officials believe that Americans traveling and gathering for the Thanksgiving holiday contributed to the latest explosion in cases.

All told 31 U.S. states have reported a grim record in new COVID-19 infections for December as hospitalizations and deaths also spiral. More than 194,600 new cases were confirmed on Tuesday alone.

Americans who saw a ray of hope in the release of two vaccines in December learned of an even more transmissible coronavirus variant spreading in the United Kingdom, which has not been fully tested against the inoculations.

The United States, unlike many nations worldwide, has not banned travelers from Britain.

New York City Mayor Bill de Blasio said that international travelers would be required to quarantine for 14 days and to provide contact information. Sheriff’s deputies will make visits to enforce the order on those arriving from Britain.

New York Governor Andrew Cuomo has asked airlines to screen British travelers for COVID-19. The state was an early epicenter of the virus and has recorded more COVID-19 deaths than any other state.

Washington Governor Jay Inslee this week ordered a 14-day quarantine for travelers arriving from the UK, South Africa or other countries where the new variant had been detected.

More than 600,000 people have so far been inoculated against the coronavirus with vaccines developed by Pfizer (NYSE:PFE) and BioNtech and Moderna (NASDAQ:MRNA) and approved for emergency use by the U.S. Federal Drug Administration.

The Trump administration said on Wednesday it had reached a $2 billion deal with Pfizer distribute 100 million additional doses of its drug by July.

But most Americans have been told that it could be six months or more before they are eligible for the shot, with priority given to healthcare workers, nursing home residents and top government officials.

U.S. Representative Ilhan Omar, a Democrat from Minnesota, earlier this week criticized political leaders for putting themselves at the front of the line for the shot.

“We are not more important then frontline workers, teachers etc. who are making sacrifices everyday. Which is why I won’t take it,” Omar said on Twitter.

Some 400 FDNY paramedics lined up to receive their first doses of the Moderna vaccine on Wednesday, including Verena Kansog, advanced life support coordinator for Manhattan, who got her shot at a training center on Randalls Island.

“I feel relieved,” Kansog, who worried about bringing the disease home to her elderly mother, told Reuters in a phone interview. “I was not one single bit nervous.”