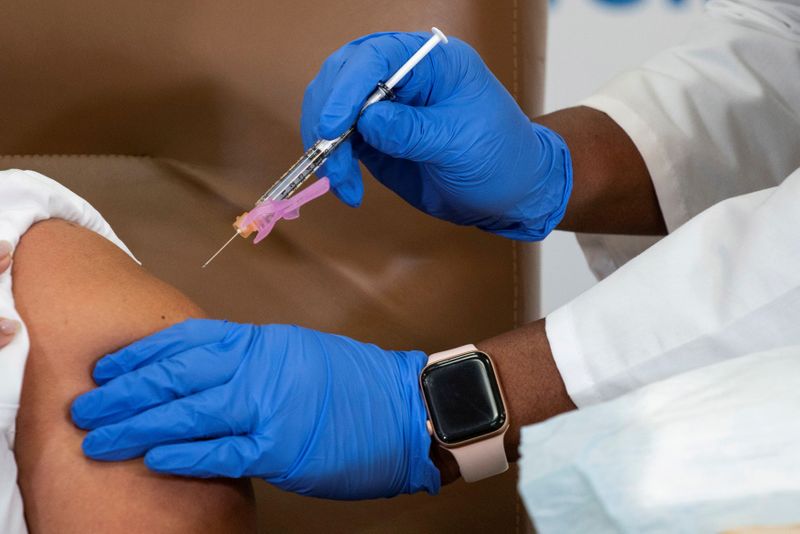 NEW YORK (Reuters) – U.S. companies and industry groups trying to move their workers to the front of the line for a COVID-19 vaccine remain confused about conflicting state and local guidelines on how shots will be administered and to which workers, even as millions of doses make their way across the country.

An independent advisory panel to the U.S. Centers for Disease Control and Prevention on Sunday voted that 30 million essential workers are next in line for vaccines. Those vaccinations are expected to start in January or February.

While states often follow CDC guidelines, they generally have broad discretion when it comes to vaccine distribution.

The panel listed categories including first responders, teachers, and workers in food and agriculture, manufacturing, grocery stores, public transit and at the U.S. Postal Service.

The Advisory Committee on Immunization Practices (ACIP) was faced with the tough choice of ranking a vast group of essential workers who, according to a list by the U.S. Department of Homeland Security, make up nearly 70% of the U.S. labor force.

The ACIP recommendations, which still need to be adopted by the CDC, come months after states formulated their own distribution plans, which have been disseminated to local health departments in preparation for the vaccine. The state-level plans differ from each other and from the federal guidelines.

It also is unclear what procedures, if any, are in place for individuals to prove they belong to a high-priority group. One industry group said on Monday it would offer its members a model letter to give to employees, attesting to their “essential” status.

The United States has two authorized COVID-19 vaccines, one from Pfizer Inc (NYSE:PFE) and BioNTech SE (NASDAQ:BNTX) and another from Moderna (NASDAQ:MRNA) Inc. The vaccines are rolling out as hospitals reach peak capacity and deaths have exceeded 315,000.

The lack of coordinated plans has led dozens of industry groups and individual companies, including Amazon.com Inc (NASDAQ:AMZN) and Uber Technologies (NYSE:UBER) Inc, to lobby state and federal officials to move their workers closer to the front of the line.

Several states including New York, Massachusetts and Michigan do not follow the panel’s recommendations and have instead drafted their own list of essential workers to be prioritized for a vaccine. Some also prioritize people with pre-existing medical conditions, who were not accounted for by the advisory panel.

Massachusetts, for example, prioritizes Uber and Lyft Inc (NASDAQ:LYFT) ride-hail drivers in the same phase as grocery-store workers, while it does not mention manufacturing at all.

“We ask that you continue to provide federal leadership to state and local leaders and reinforce the need to provide early vaccine access for essential critical infrastructure workers, including rideshare drivers and delivery people,” the letter read.

Some industry groups, including the Food Industry Association, which represents food retailers including Albertsons Companies Inc, and the American Federation of Teachers, a labor union, welcomed the ACIP’s recommendation and the inclusion of their workers.

But some groups also cautioned that despite their inclusion, the practical question of how vaccines will reach workers’ arms was still far from clear amid the patchwork of state rules.

“It’s for this reason that nothing has changed about our concerns about the piecemeal state vaccination playbooks,” a spokeswoman said.

The spokeswoman also said it remained unclear how workers could verify they were indeed “essential,” adding that Consumer Brands would provide its members with a template they can put on company letterhead confirming essential-worker status, similar to letters distributed during curfews and lockdowns so employees could get to work.

In North Carolina, which has one of the most extensive vaccine distribution plans, hospitals could submit lists of people eligible for the first vaccines to a central data system. But a spokeswoman for the state’s health department did not immediately respond to whether the same system would allow companies to submit the names of non-healthcare essential workers.

Other industry groups, like the National Waste & Recycling Association, which represents companies including Waste Management Inc (NYSE:WM) and Republic Services Inc (NYSE:RSG), said it would continue pushing to prioritize its workers for a vaccine, despite not being included in the ACIP recommendations.

The group on Monday asked CDC Director Robert Redfield, in a letter seen by Reuters, to include the waste and recycling industry in the next vaccination phase across the country.

Kirk Sander, the group’s chief of staff and vice president of safety and standards, said one of its members, a large medical waste company, saw local officials prioritize its workers, who pick up waste from hospital wards, for a COVID-19 vaccine in some counties, but not in others.

“It gives weight to that conversation if the CDC weighs in,” Sander said of Monday’s letter.