Home
Stocks
The Tell: A surge in ‘blank check’ companies this year could drive $300 billion in M&A in 2021–22, forecasts Goldman
Prev Article Next Article
This post was originally published on this site

It has been the Year of the SPAC, according to Goldman Sachs, and the next two years are likely to see the ripple effect of the growth of this method of capital raising, which has surged in popularity amid the COVID-19 pandemic.

“In history books, the year 2020 will forever be known for the deadly pandemic. … But from a capital markets perspective, this year will undoubtedly be known as the year of the SPAC,” wrote a team of strategist at Goldman including David Kostin.

Special-purpose acquisition companies, or SPACs, are publicly traded shell companies formed to merge or acquire another company and have been popular since the 1980s. However, this year those entities have ballooned as an easier avenue for private entities to enter the public equity markets.

One proviso: that the SPAC needs to complete an acquisition within two years or the capital raised must be returned to investors.

SPACs — also referred to as blank-check companies — have raised a record $70 billion via 206 offerings, a fivefold increase from 2019’s record SPAC tally, wrote the Goldman team. 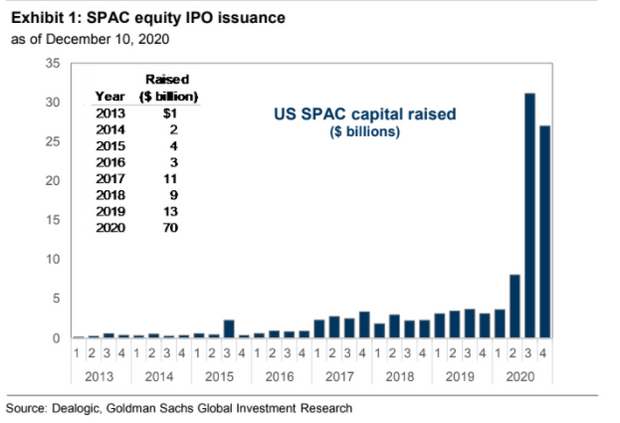 Goldman’s crew make the case that the current drivers for SPAC activity — interest rates at or near 0%; a push by sponsors from toward growthier prospects, largely in technology-related fields, vs. value-oriented opportunities; and a surge in retail appetite — have propelled SPAC demand. 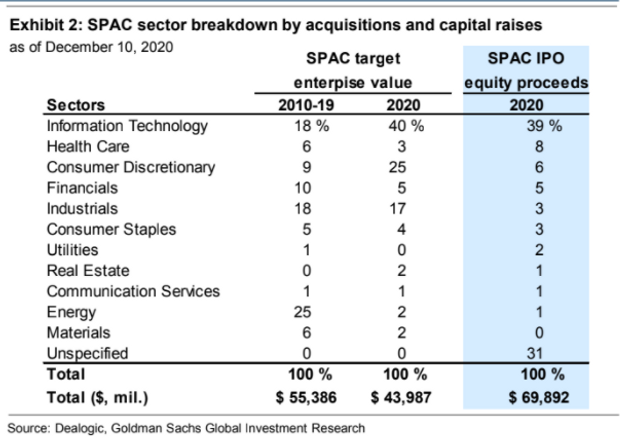 The investment bank’s strategists expect those drivers to persist over the next 12 to 24 months.

“Simply put,” the Kostin team said, the existing state of play “is likely to remain in place. New SPAC issuance has accelerated dramatically in [the second half of the year] as 53% of the capital raised [in 2020] has taken place since Labor Day. The most recent wave of issuance has broadened the universe of SPAC sponsors and lent institutional credibility to the SPAC process.”

Goldman said that based on its 24-month post-IPO expiration dates, “these SPACs will need to acquire a target in 2021 or 2022, nearly equal to the total enterprise value of SPAC deal closures during the last decade.”

Financial-services company Open Lending has gained 135% since the close of its deal, through Dec. 10, according to Goldman Sachs, making the company one of the best SPAC performers this year.

Online gambling company DraftKings, which went public via a merger with a SPAC called Diamond Eagle Acquisition Corp. and SBTech Global Ltd. earlier this year, are up 128% from the time of the closure of that deal.

On the other hand, Nikola, which merged with VectolQ Acquisition in June, has seen its shares fall 64% since its deal closed, noted the Goldman team.

Space-tourism company Virgin Galactic was in the vanguard of the current SPAC boom, going public through a merger with Social Capital Hedosophia last October. It is up about 370% this year. 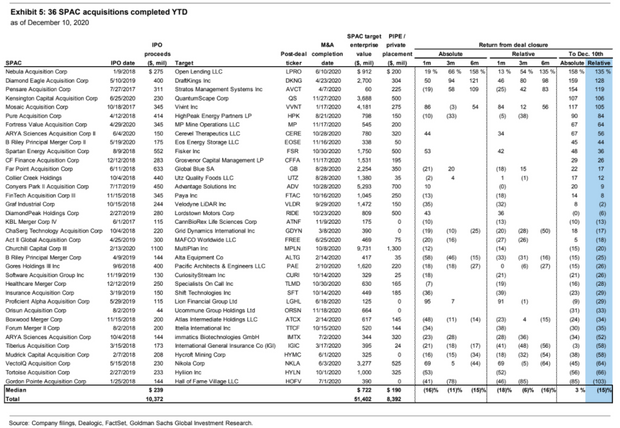 Such comparative outperformance underscores the appetite for assets that investors hope can eventually generate revenues, sales or profit growth running ahead of peers, but it also highlights the speculative, growth-driven fervor surrounding the rebound in markets amid the COVID-19 pandemic.

Goldman added some words of caution. Underperformance in SPACs could build upon itself and subsequently take some of the froth off the SPAC category.

On top of that, Goldman said that the ability of SPAC sponsors to continue to tap financing via PIPEs, or private placements of public equity, appeared crucial to SPAC success.

“SPACs without PIPEs or private placements have dramatically underperformed in 2020,” Goldman wrote.

“All six SPACs that did not raise incremental capital in conjunction with their mergers have posted negative returns relative to the S&P 500 from deal closure to today (an average of -42 [percentage points] vs. the S&P 500),” the analysts wrote.