Home
Stocks
CityWatch: New York City indoor dining could shut down by next Monday, Cuomo says
Prev Article Next Article
This post was originally published on this site 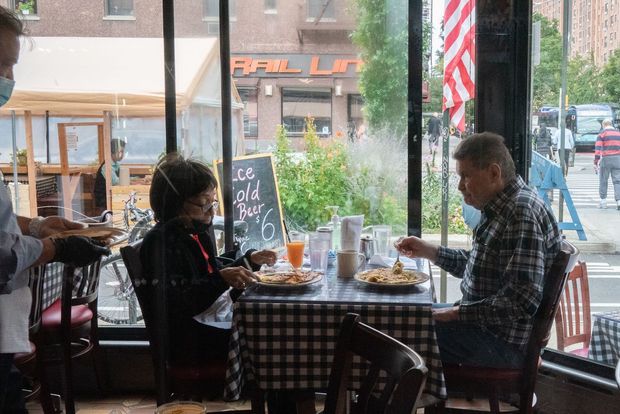 Indoor dining in New York City could shut back down as soon as next Monday if COVID-19 hospitalization rates don’t stabilize in the next five days, said Gov. Andrew Cuomo in a news conference Monday morning. In the rest of the state, indoor dining could be reduced from 50% capacity to 25%.

“You cannot overwhelm your hospitals,” Cuomo said. “If you start to do that, you must shut down. Not just indoor dining but all but essential businesses.”

After the initial PAUSE orders and shutdown in the spring, indoor dining reopened at 25% capacity in New York City at the end of September.

Cuomo also announced a new order calling on hospitals to increase bed capacity by 25%, and called on retired doctors and nurses to return to service. The potential closure of indoor dining seems to be separate from broader “orange zone” restrictions that could be applied to New York City if cases keep rising, and which would include switching schools back to remote-only learning, as well as closure of gyms and salons.

See: These N.Y. performers from various fields are making it work, despite shutdowns

A potential switch back to remote-only classes could mean a case of whiplash for parents of New York City elementary school students, who returned to in-person classes today nearly three weeks after Mayor Bill de Blasio closed schools in response to rising infection rates. The Nov. 18 closures came after citywide infection rates hit the 3% threshold, and in order to reopen the city will no longer use that metric, the mayor said.

The city’s seven-day rolling average infection rate is currently at 4.98%, according to data released on Monday.

The potential restrictions on dining are based in part on new CDC guidance targeting indoor dining as a source of spread, and Dr. Anthony Fauci, the director of the National Institute of Allergy and Infectious Diseases, joined Cuomo for Monday’s announcement, saying that New York’s plan for dealing with the current surge in cases “seems really sound.”

“You have a lot of backup contingencies, which I like, so you’re not going to get caught short-handed on this,” Fauci added.

Fauci also addressed a potential timeline for vaccinations in New York, saying that after the early rounds of vaccinations for health-care providers and other New Yorkers in high-risk and high-priority groups, “By the time you get to the beginning of April, you’ll start getting people who have no high priority, just a normal man and woman New Yorker on the street who’s well, has no underlying conditions.”

The success of a vaccination program in large part depends on how much of the population participates, however, and Fauci warned that while a 75% to 80% vaccination rate would render “the level of community spread really very low,” if only 50% of the population opts into the vaccine, “we don’t have that umbrella of immunity over us.”

Last week, Cuomo announced that the city expects to receive its first 170,000 doses of the Pfizer PFE, +2.26% vaccine by Dec. 15, and that nursing home staff and residents will be given first priority. Since the vaccine requires two doses, the state will receive a second round of 170,000 doses three weeks after the first.

Read: What side effects, if any, can you expect from a COVID-19 vaccine shot?

Statewide, 4.79% of COVID-19 tests were positive on Sunday, according to Cuomo. Hospitalizations were at 4,602, and 80 New Yorkers died.