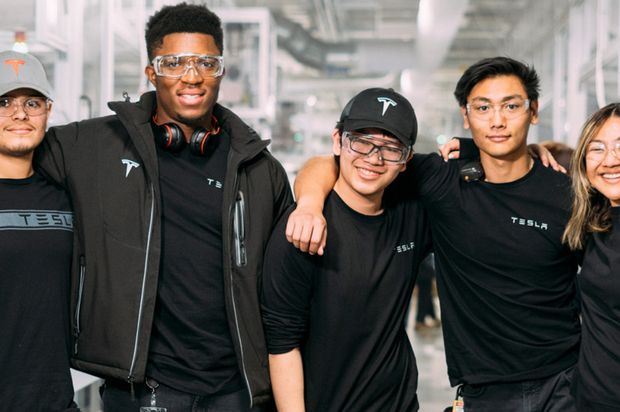 Tesla has released its first diversity report, lagging similar releases at other tech giants. The company says it leverages differences as part of a shared mission to accelerate the world’s transition to sustainable energy.

Tesla Inc. has published its first-ever diversity report, promoting a “majority minority” U.S. workforce, but the release’s details show that 83% of leadership roles are held by men and 59% of those in decision-making positions are white.

The Diversity, Equity and Inclusion Impact report out late Friday from Elon Musk’s electric-vehicle and renewable-energy company TSLA, +0.95% said the company will recruit from historically Black colleges and universities and conduct unconscious bias trainings for managers and recruiters. Increasing women’s representation at all levels, especially in leadership, is a top priority in 2021, the company said.

The report notably excludes figures on attrition and retention overall, including specifics on race and gender and longevity among its employees. This is key reporting according to labor analysts because the company bases some of its compensation on a stake in company equity, so total compensation often relies on a long run with Tesla.

There is also no intersectional analysis, failing to reveal if, for instance, people of color at Tesla are promoted at the same rate as whites.

Overall, the leadership category — which includes directors and above —accounted for a “very small” percentage of total employees, at under 0.4%, Tesla said.

Men at Tesla represented approximately 79% of the workforce, 83% of leadership, 75% of new hires and 77% of the promotions announced in 2020.

White employees represented approximately 34% of the workforce, 59% of leadership, 32% of new hires and 35% of promotions in 2020.

Hispanic and Latino or Latina employees represented approximately 22% of the workforce, 4% of leadership, 27% of new hires and 24% of promotions in 2020.

Asian employees represented approximately 21% of the workforce, 25% of leadership, 20% of new hires and 23% of promotions in 2020.

Black employees represented approximately10% of the workforce, 4% of leadership, 12% of new hires and 10% of promotions in 2020.

“Additional groups” including Pacific Islander, Native American, Native Hawaiian and Alaska Native communities account for 7% of the workforce and 1% of leadership.

As part of the report, Tesla said it will recruit from historically Black colleges and universities, increase its offerings of new apprenticeships, and it will conduct unconscious bias trainings for all people managers and recruiters in 2021. The company has faced criticism of discriminatory hiring and workplace practices, which it has denied.

“We know that our numbers do not represent the deep talent pools of Black and African American talent that exist in the U.S at every level — from high school graduates to professionals. Many of our programs in 2021 will focus on increasing Black and African American representation, especially in leadership, while continuing the upward trend in new hires and promotions,” the company said in the report.

The report also emphasized a company push outside of its native California, including in areas that historically have lagged in new-economy industry.

“We are investing in communities like Reno, Nevada, Buffalo, New York, and Austin, Texas, to support the acceleration of robotics, STEAM and sustainability programming within the education systems and we offer first-in-line employment opportunities to program participants,” the report said.

The Tesla report is lighter on details than similar disclosures from major technology companies including Google GOOGL and Apple AAPL. Both tech firms began publishing demographic information about their workforce in 2014 as part of a broader regulatory push for more disclosure and amid increasing pressure from investors and investor lobbies that corporate boards and management positions include more selections with varied backgrounds.

Tesla shares have surged more than 615% in the year to date with a $555 billion valuation that dwarfs all car-making rivals and leaves some investors arguing that stock value has decoupled from economic fundamentals.

Read: 3 potential scenarios for Tesla’s stock — none of them are good