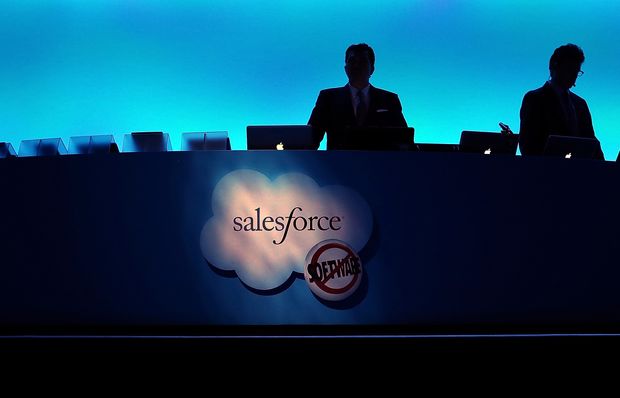 The Salesforce logo is displayed on a podium during the Dreamforce 2012 conference in San Francisco.

Salesforce.com Inc. shares declined in the extended session Tuesday after the cloud-based customer relationship-management company confirmed it would acquire Slack Technologies Inc. in a deal worth $27.7 billion and topped Wall Street estimates for the quarter.

The company confirmed it would buy Slack WORK, +2.23%, with Slack shareholders receiving $26.79 in cash and 0.0776 shares of Salesforce common stock for each Slack share, or for a combined $45.86 a share. Slack shares fluctuated between slight gains and losses after hours, following a 2.2% rise in the regular session to close at $43.84. Slack’s stock is up 95% for the year, and up 44% since last Tuesday, when reports of the deal surfaced.

Salesforce’s acquisition of the business-communications company, which went public in June 2019, is seen as a “major shot across the bow” at Microsoft Corp. MSFT, +1.00%, which has its competing Teams direct messaging service and already competes with Salesforce with its Dynamics 365 CRM service.

Salesforce said it would fund the cash portion of the deal with a combination of new debt and cash on hand, noting it received a commitment from Citigroup, Bank of America, and J.P. Morgan Chase for a 364-day $10 billion bridge loan.

Salesforce said it expects the acquisition to close in its fiscal second quarter, which ends in July 2021.

“We had another record quarter, and now we’re raising our FY21 revenue guidance to $21.11 billion at the high end and initiating FY22 guidance of $25.5 billion,” said Marc Benioff, Salesforce chairman and co-CEO, in a statement.

Back in August, Salesforce’s second-quarter earnings and outlook triggered its biggest one-day stock gain ever with a 26% rally as quarterly revenue hurdled the $5 billion mark for the first time.