Home
Stocks
: Amazon workers are striking on Black Friday as part of a global movement
Prev Article Next Article
This post was originally published on this site 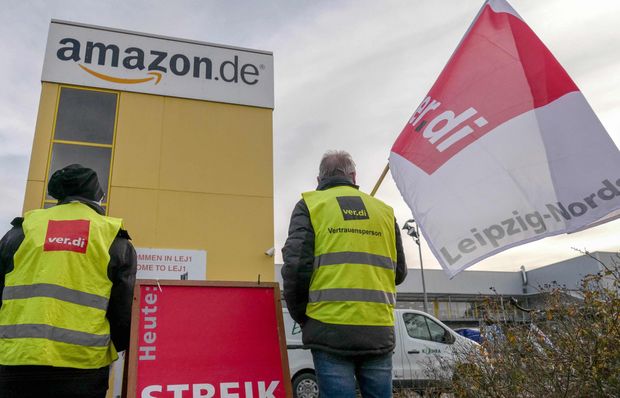 Workers at seven of Amazon’s 16 warehouses in Germany have been on strike since Thursday, and in some cases since the beginning of the night shift on Wednesday, protesting conditions and pay.

Amazon workers around the world are protesting about their working conditions, including through strike actions,  during one of the busiest periods of the year.

A global union initiative to hold the e-commerce giant to account planned action by workers and supporters in 15 countries around the world on Black Friday, including in the U.S., U.K., Germany, France, and India.

The largest strikes are expected to be in Germany— which after the U.S., is the company’s second-most important market. Amazon AMZN, +0.32% has a longstanding battle with Verdi, the country’s second-largest trade union, which has a history of successfully mobilizing the company’s workers, including actions during Prime Day in October.

Workers at seven of Amazon’s 16 warehouses in Germany have been on strike since Thursday, and in some cases since the beginning of the night shift on Wednesday, protesting conditions and pay. The company employs 16,000 permanent front line employees and brought in an additional 10,000 to boost capacity during the busy holiday period.

Verdi told MarketWatch that around 2,500 workers or more were taking part in the strike, which is in line with the participation numbers from actions the union organized in October and June. According to Amazon, the participation is far lower by as much as 1,000 workers.

Verdi and Amazon have been at loggerheads for seven years over Amazon’s rejection of collective bargaining agreements for workers in the retail and mail-order industry.

The union representing 2 million workers says that Amazon’s German workforce suffers lower wages and poorer working conditions because they are not included in the collective agreement.

Amazon said that the strikes in Germany were having “no impact” on their regular activities, and reiterated their position that the company offers excellent pay, benefits, and opportunities for career growth, as well as a safe work environment.

The strikes come a day after Amazon announced that it would be rewarding its front line workers with a one-time bonus costing the company $500 million.