Home
Stocks
Cryptos: Bitcoin isn’t the only digital currency staging a stunning comeback in 2020
Prev Article Next Article
This post was originally published on this site

Bitcoin’s rise and popularity is overshadowing the resurgence of a rival digital asset that some believe might one day surpass its predecessor.

Ether coins, which run atop the ethereum blockchain have risen by about 5.7% so far this week, compared against bitcoin’s BTCUSD, +0.14% nearly 13% run-up over the same period.

Ether broke above $500 on Friday, marking its highest level in over two years and shining a light on the cryptocurrency that is the second-largest by market value and arguably by popularity in the nascent digital-asset sector. However, as opposed to bitcoin, which was hanging less than 10% from its December 2017, record, ether is still a far cry from its $1,433.

For that reason, some crypto enthusiasts have declared ether a better bet for those looking to dip their toe in the resurgent waters of blockchain assets.

Like bitcoin, ethereum is an open-source, decentralized platform that is known for the ease by which developers can write smart contracts atop its blockchain protocol. Those include contracts that can help facilitate, say, the documentation and sale of properties without a broker.

The platform is going through a transition to a so-called proof-of-stake, which benefits those who hold a greater stake of ether coins rather than those which expend enormous amounts of computing power to mine coins, as is the case with bitcoins.

CoinDesk’s Omkar Godbole says that that transition to ethereum 2.0, expected next month, might be sparking greater demand for ether.

Proponents of Ethereum’s blockchain are pushing for greater efficiency in transactions with its latest planned upgrade. Those who favor ethereum over the older and more popular bitcoin, hope for a day when the market value on the ethereum platform, now about $58 billion, surpasses that of bitcoin, currently at $344 billion, according to CoinMarketCap.com. 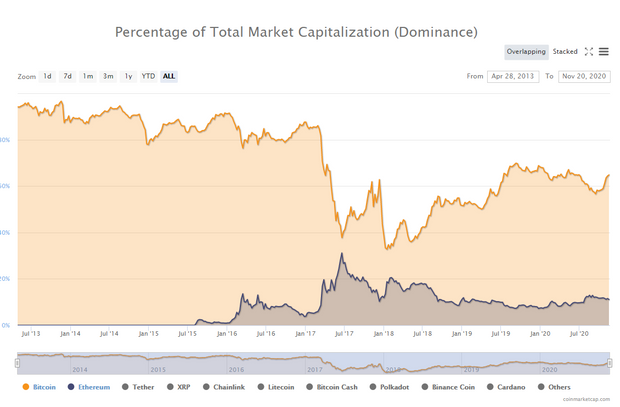 Both ether and Bitcoin are boasting superior gains compared against traditional assets. The Dow Jones Industrial Average DJIA, -0.74% is up 2.7% so far this year, the S&P 500 index SPX, -0.67% has gained 10.4% over the same period and the Nasdaq Composite Index COMP, -0.41% has advanced nearly 33% in the year to date.

Meanwhile, gold GOLD, +0.41%, which bitcoin and sometimes ether are pit against, was up a relatively quotidian 23%.