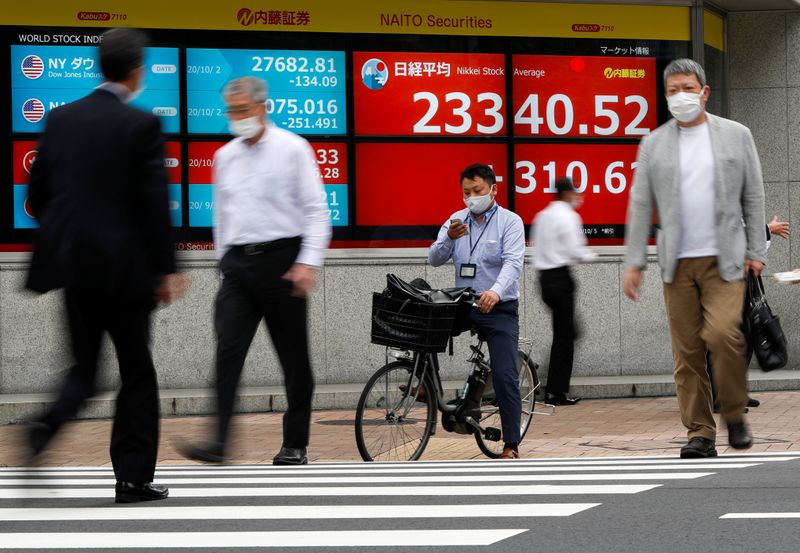 The U.S. dollar, meanwhile, was marginally lower against the Antipodean currencies. Oil prices crept higher, though not enough to recoup late-week losses on worries about the winter ahead.

Traders are expecting more good vaccine news as soon as this week from drugmaker Moderna (O:MRNA), following the successful trial of Pfizer ‘s (N:PFE) similar drug – and that seems enough to assuage nearer-term concerns about the virus’ economic harm.

“There’s just mountains of cash sitting on the sidelines, waiting to be put to work and since we’ve got this vaccine news, as well as diminished risk around the U.S. elections, all of this is flying into equities,” said Kyle Rodda, analyst at IG Markets. “Everyone’s thinking now that it’s the cue to get in.”

President Donald Trump appeared on Sunday to acknowledge losing the U.S. election but then backtracked and said he concedes “nothing,” while President-elect Joe Biden focused on tackling the coronavirus pandemic.

In North Asia, Japan’s quarterly economic growth beat expectations while China’s factory output and retail trade data is due later in the day.

Fifteen Asia-Pacific economies, including China and Japan but excluding the United States agreed to a trade deal over the weekend which, although light on detail or immediate tariff cuts, is a landmark pact for East Asian exporters.

“(The) agreement … signals that Asia keeps pushing ahead with trade liberalisation even as other regions have become more sceptical,” said HSBC economists Frederic Neumann and Shanella Rajanayagam in a note.

“As such, it may reinforce a trend that’s been already underway for decades: that the global centre of economic gravity keeps pushing relentlessly to the East.”

In currency markets, majors were mostly flat apart from sterling, which made a nervous start to a week that looms large for Brexit trade talks, slipping a tad against the euro (EURGBP=) and the dollar to last hold at $1.3180.

The departure of hardline adviser Dominic Cummings from Downing Street last week may leave more room for British compromises, but chief negotiator David Frost said on Twitter that talks “may not succeed”.

Negotiations have already missed several deadlines and the next one looms with Thursday’s European Union summit.

The risk-sensitive Australian dollar bought $0.7284 and was steady ahead of a week of central bank speeches and significant data, beginning with Reserve Bank of Australia Governor Philip Lowe at 0840 GMT.

A slew of U.S. Federal Reserve speakers are also up this week, beginning with Vice Chair Richard Clarida at 1900 GMT.

Bonds, which had sold off strongly on vaccine news last week, pared some losses into Friday’s New York close to leave the yield on benchmark U.S. 10-year debt (US10YT=RR) at 0.8930%, from a week high above 0.97%.