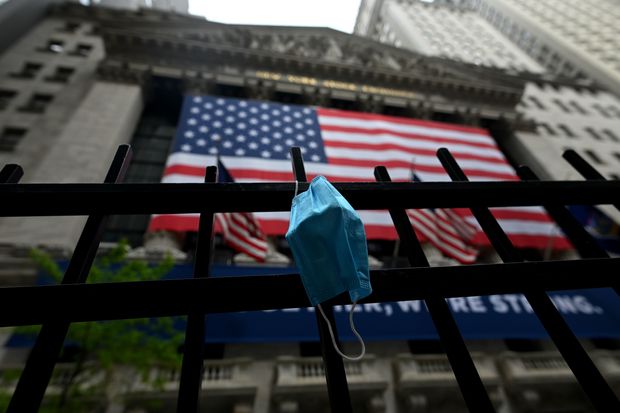 Stock-index futures fell hard Wednesday morning, under pressure as a continued rise in COVID-19 cases in the U.S. and Europe heightened investor worries over the economic recovery.

Stocks have been under pressure this week as Germany and France weighed further restrictions on business activity in an effort to contain the rise in COVID-19 cases and the U.S. saw the number of new cases hit records.

The number of new U.S. cases daily rose back above 70,000 on Tuesday after hitting a record above 80,000 at the end of last week. The U.S. has reported a record 500,000 cases over the past week, the New York Times reported, while the seven-day average of confirmed new cases hit a record of 69,967 on Monday, according to a Wall Street Journal analysis of data from Johns Hopkins University.

“In 36 states, the hospitalization rate for the coronavirus increased by at least 5% over in the past seven days,” said David Madden, market analyst at CMC Markets. “Traders keep an eye on the hospitalization rates because the authorities want to ensure the health care services aren’t overwhelmed — that can often be a trigger to bringing in tougher restrictions.”

Jitters ahead of the Nov. 3 presidential election, now less than a week away, were also contributing to volatility, analysts said. Democratic challenger Joe Biden has maintained a lead over President Donald Trump in the polls, but the race has tightened. An unclear or contested election result would be a potential worst-case scenario, analysts said.

Investors also continue to wade through the busiest week of the earnings reporting season, including better-than-expected results late Tuesday from software giant Microsoft Corp. MSFT, +1.50%, though the company’s forecast came in shy of estimates. Shares were down 2% in premarket trade.

The U.S. economic calendar features advance trade in goods data for September at 8:30 a.m. Eastern. Economists surveyed by MarketWatch expect the trade deficit to widen to $83.5 billion from $82.9 billion a month earlier.