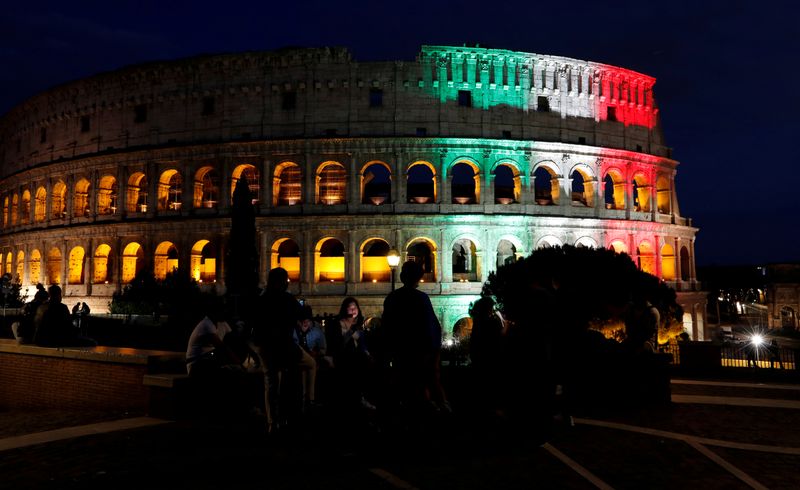 MILAN (Reuters) – As the coronavirus rips through Italy’s already fragile economy, one sector should be thriving – the market for soured debt.

Not so, say some would-be buyers of such loans. The problem? The government, they say, is crowding them out.

AMCO, a state-backed bad loan manager, has gone from bit player to one of the leading forces in Italy’s 330 billion euro ($390 billion) bad debt market in the space of three years with over 33 billion euros in assets under management.

Swamped by bad debts from the last financial crisis, Italy in 2016 put the Treasury in control of AMCO, expanding its remit beyond managing the problem loans of failing Banco di Napoli for which it had been created two decades earlier.

In 2018 AMCO took on a pile of unpaid loans from two regional banks being liquidated. Stepping in to relieve ailing lenders of soured debts remains its main focus, including a complex deal it is due to complete by Dec. 1 for 8.1 billion euros in loans from bailed-out lender Monte dei Paschi.

However, under the leadership of former UniCredit executive Marina Natale, AMCO has also started participating in the sale of debts from healthy lenders, creating a stir in the market.

AMCO is currently vying for some 1 billion euros in problem loans put on the block by Italy’s third-largest bank Banco BPM, three people familiar with the matter have said, in a move that prompted at least two potential bidders to drop out, the people say.

Speaking on condition of anonymity, two suitors for the Banco BPM portfolio told Reuters they refrained from submitting an offer because they had no hope of beating AMCO’s proposition and didn’t want to spend between 2 million and 4 million euros analysing the loan books.

Rival bad loan managers say they had already been irked by AMCO winning a tender for a small portfolio sold by Creval and striking a partnership with rival Prelios to manage impaired property loans for a group of banks.

Such higher prices help financial stability by limiting losses for banks, according to Elena Carletti, a finance and banking professor at Milan’s Bocconi university.

The pricing gap between buyers and sellers held back Italy’s bad loan market for years, until the state closed it through a guarantee scheme that leaves taxpayers on the hook for part of the potential losses.

In a statement to Reuters, AMCO said it had always applied a strict pricing discipline when competing for loan portfolios, and so far this year, it had lost three out of seven tenders it had taken part in.

AMCO says it operates at market conditions and under the strict oversight of European competition authorities and Italy’s state accounting body.

Speaking at a recent conference organised by specialised lender Banca IFIS, Treasury adviser Giuseppe De Martino said the ministry was aware of concerns among market players but did not share them.

“AMCO’s strong point is a patient shareholder that is not after double-digit returns in the short term. This allows it to combine profit goals with the public interest,” he said.

“AMCO should not be seen as crowding out private investors given the public nature of its shareholder … it has an important role to play in the market.”

The Treasury declined to comment further for this story.

The role of state-backed players like AMCO is under the spotlight as European authorities strive to prepare for the new bad loan wave driven by the pandemic.

The COVID-19 crisis may as much as double Europe’s half-a-trillion problem loan pile based on some estimates.

“We need rules on who does what, there are banks that need saving and banks that don’t. AMCO is a competitor and not a bad bank like in other countries. Clear rules must be in place by the time the new wave hits,” Marc Knothe, Italy’s head at Europe’s largest bad loan manager Intrum, told the IFIS conference.

While stoking new flows, the pandemic also makes it harder to recover loans.

“AMCO buys assets in competition with private investors and then manages them … so it ends up distorting the market for both buyers and collectors of bad loans,” Andrea Mangoni, head of Italy’s biggest loan recovery firm doValue, told the IFIS conference.

“It’s a direct rival in a hyper-competitive market that was probably already overcrowded even before AMCO arrived.”