Home
Stocks
The Conversation: ‘What goes around, comes around,’ or what Greek mythology tells us about Donald Trump’s COVID infection
Prev Article Next Article
This post was originally published on this site 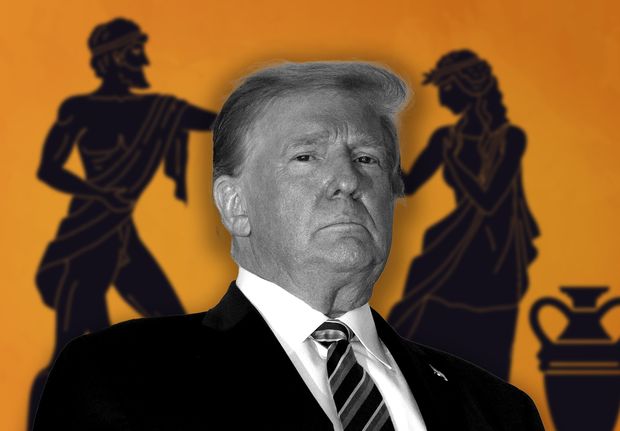 It’s hard to process the news of the president’s positive COVID-19 diagnosis without having recourse to some kind of mythological system, some larger frame of reference.

“Karma,’ wrote one journalist, and then reproached himself for the ungenerous thought. Or perhaps it was simple irony on display when, Washington Post reporters wrote, “President Trump contracted the novel coronavirus after months in which he and people around him…avoided taking basic steps to prevent the virus’s spread.”

“ What does Oedipus learn in the course of the drama? Quite a lot. He may blame the gods or fate for his plight, but he also takes responsibility for what has happened. ”

All these reactions make sense. If there’s one thing we know about a virus that’s still mysterious in many ways, it’s that this coronavirus is expert at going around.

And as a classics scholar, I can assure you: What goes around comes around. Greek mythology provides insight to help us understand today’s chaos.

Failure to see until too late

Many years ago, my high school English teachers put a lot of stress on terms like foreshadowing, climax and denouement. All these words marked points along a steep curve of the development of a story: rising action, turning point, falling action.

There was also a lot of emphasis, as we discussed plots, on a term I then found harder to understand: pride. Pride: arrogance; an exaggerated sense of self-worth. Pride tended to be followed by catastrophe—that falling action again.

As a high-school student, I tended to confuse pride with vanity, with narcissistic preening; the tragic penalty of vanity seemed exaggeratedly severe.

What does “pride” really mean? The Greek word it translates is hubris, and pride doesn’t quite cover the range of the meaning of hubris. Vanity may well be part of hubris, but a more crucial sense of the word is terrible judgment, gross overconfidence, blindness, obtuseness, a failure to see what is staring you in the face—a failure to see it until it’s too late.

I don’t recall my teachers mentioning nemesis or até, forces or principles that are closely associated with hubris in Greek mythology.

Nemesis is more often personified, and hence capitalized, than até. She’s a goddess of retribution, and she can follow acts of hubris with the certainty of a law of gravity—except that there may be a considerable time lag, as if one dropped a plate and it took a generation for it to break. That concept likewise appears in the Bible’s book of Ezekiel, which says “The fathers have eaten sour grapes, and the teeth of the children shall be set on edge.”

Até is a more unpredictable figure, not necessarily personified—classics scholar E.R. Dodds in “The Greeks and the Irrational” tentatively defines até as “a sort of guilty rashness.”

On the other hand, até can be unforgettably personified, as when Mark Antony addresses the body of Caesar and predicts civil war in Shakespeare’s “Julius Caesar:”

“And Caesar’s spirit ranging for revenge,
With Até by his side, come hot from hell,
Shall in these confines, with a monarch’s voice,
Cry havoc, and let slip the dogs of war…”

Goddess or not, até, like nemesis, can be thought of as a kind of mechanism whereby one evil is succeeded by another. There’s a chain reaction, a cause and result. Nemesis seems cooler, more targeted and precise; até lets all hell break loose, and also is the hell that breaks loose. Categories blur in the chaos.

‘He himself is the polluter’

When I studied and taught Sophocles’s tragedy “Oedipus the King,” the stress was on hubris, irony, blindness. What wasn’t emphasized is that the play was written during and is set in the midst of a plague.

The citizens of Thebes, in the tragedy’s opening scene, implore their wise and resourceful ruler Oedipus to save them from this disastrous illness.

Oedipus, moved by their plight and confident in his own capability, promises to do exactly that. His effort to hunt down the criminal whose unpunished sin is polluting the city and causing the plague leads to Oedipus’s own exposure as the source of that pollution.

The final words of the tragedy are addressed by the chorus to the citizens of Thebes. Presumably the plague will be routed; the city has indeed been cleansed. In contrast, the citizens of our country keep on dying. The president removes his mask and proclaims his triumph.

Aristotle recommends in his “Poetics” that in the best tragedies, the pivot or reversal—called “peripeteia”—from the height of success to disaster is accompanied by some kind of knowledge—anagnorisis, or recognition. “Pathei mathos,” sings the chorus in Aeschylus’s tragedy “Agamemnon”: wisdom comes through suffering.

The simultaneity of Oedipus’s enlightenment and his catastrophe is one of the factors that made Aristotle so admire this elegantly plotted play.

The untranslatable, chaotic force of até plays out in the cycle of reversal followed by recognition; arrogance followed by retribution. What are we supposed to think?

Whether we rejoice or mourn, whether we’re elated or fearful, and whatever happens in the weeks and months to come, this news—that the president has COVID-19—arrives with a freight of predictability: This particular infection seems, in retrospect, if not inevitable then at least overwhelmingly likely.

Hubris: not seeing what’s in front of your nose. Even as lawsuits and tell-all books have piled up, Trump has always seemed triumphantly immune. Not any more.

What happens next? Unlike Oedipus, Trump has denied that there was ever a dangerous illness in the city—although Bob Woodward’s book, “Rage” makes clear that he knew there was. Unlike Oedipus, he has refused his people’s pleas for help.

What does Oedipus learn in the course of the drama? Quite a lot. He may blame the gods or fate for his plight, but he also takes responsibility for what has happened.

What will COVID—his own personal, irrefutable experience of COVID-19—teach Trump? Humility? Compassion? Respect for expert advice? The existence of Nemesis? His own diagnosis of hubris, with a measure of até thrown in?

The answer is all too clear. Released from the hospital, Trump tweeted: “Don’t be afraid of Covid. Don’t let it dominate your life!” He also said “Maybe I’m immune” and took off his mask when returning to the White House.

Tragedy, I tell my students, doesn’t teach a lesson or preach a moral. It offers a vision. Not: don’t be arrogant, prideful, hubristic. Rather: Men of Thebes, look upon Oedipus.

Rachel Hadas is a professor of English at Rutgers University Newark.

This article was originally published by The Conversation—‘What goes around comes around,’ or what Greek mythology says about Donald Trump