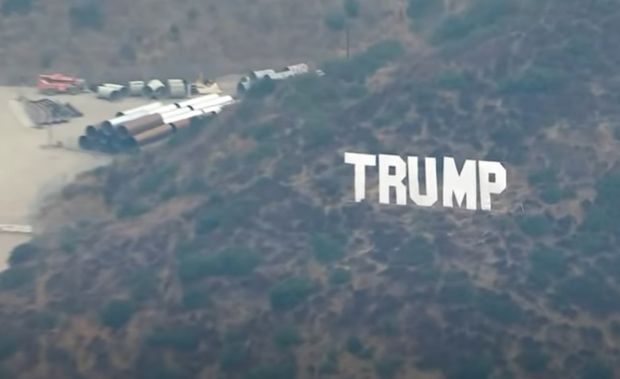 The Hollywood sign has been around for nearly a century. The Trump version of the classic Southern California symbol didn’t even last a day.

Here are some other angles:

Not surprisingly, those five letters, prominently displayed in that recognizable Hollywood sign font Tuesday morning on the hills above the 405 Freeway in Los Angeles, were knocked down.

The Golden State certainly isn’t Trump country, no doubt, but that’s not why it was removed, apparently. Caltrans told KTLA it created a traffic hazard as drivers were slowing down to take pictures. The sign was on private property, but the party that called it in initially voiced concerns over a potential fire. That’s the story, anyway.

Officials reportedly couldn’t identify who exactly put the sign in the prominent hillside property, but its own to the land owner to fully remove it.

This isn’t the first time a Trump symbol has ran into problems in the land of the liberal elite. His star on the Hollywood Walk of Fame has been targeted several times. Years back, a suspect used a pick ax and sledgehammer to carve the “Trump” name from the sidewalk.

Then there was this artistic rendering of the Trump wall.

And the star was again vandalized just last week. This time by the Incredible Hulk. The perp was eventually arrested. Here’s the footage: