Home
Market
Futures fall after heated presidential debate
Prev Article Next Article
This post was originally published on this sitehttps://i-invdn-com.akamaized.net/trkd-images/LYNXMPEG8T1GQ_L.jpg 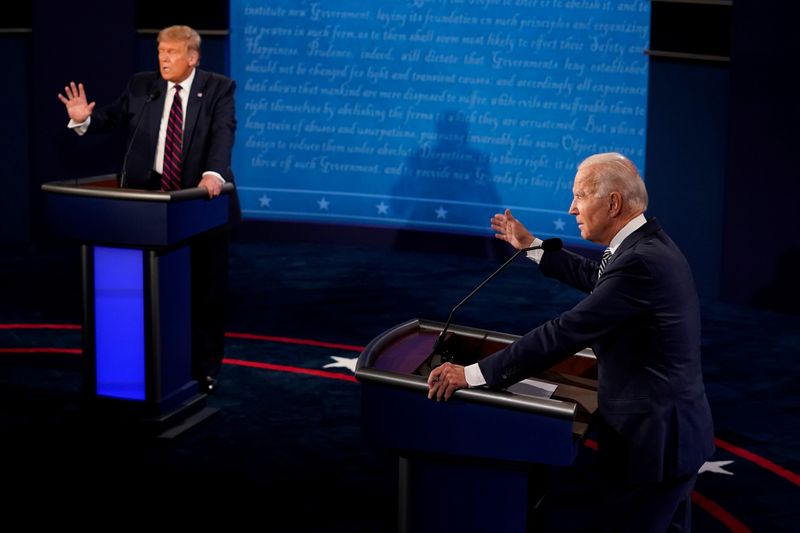 (Reuters) – U.S. stock index futures fell on Wednesday as a heated first presidential debate pointed to a tough race ahead, with investors also locking in gains on the last day of the third quarter.

President Donald Trump and Democratic rival Joe Biden battled fiercely over Trump’s record on the coronavirus pandemic, healthcare and the economy in a chaotic and bad-tempered first debate.

“It is becoming more likely that we won’t have a clear-cut winner on the night of the election and could have a few weeks of contested period,” said Masahiko Loo, portfolio manager at AllianceBernstein (NYSE:AB) in Tokyo.

Market volatility has steadily climbed higher in the past few weeks as investors grew cautious ahead of the elections and on doubts whether Trump would accept the election’s outcome if he lost.

Analysts said stock markets could also be subject to quarter-end rebalancing of investor portfolios on Wednesday, as the previous session was marked by market participants booking profits after a strong start to the week.

“It is the end of the month, the end of the quarter, there’ll be a certain amount of portfolio tidying and profit taking that goes along with that,” said Connor Campbell, financial analyst at spread better Spreadex.

Wall Street’s main indexes are headed for their first monthly declines since March, when lockdowns slammed the economy. Despite the expected weakness in September, the S&P 500 and the Nasdaq were on course for their best two-quarter winning streaks since 2009 and 2000, respectively.

The ADP National Employment Report, due at 8:15 a.m. EDT, will be closely watched, while a more comprehensive jobs report will be released by the Labor Department on Friday.

Separately, figures on inflation and a final estimate for second-quarter gross domestic product were also on the radar.

Micron Technology Inc (NASDAQ:MU) slipped 4.3% after the chipmaker said it has not yet obtained new licenses needed to sell its memory chips to China’s Huawei Technologies Co Ltd, which would cut its sales over the next two quarters.