Home
Stocks
: So-called hidden unemployment is masking the jobless problem in Europe
Prev Article Next Article
This post was originally published on this site 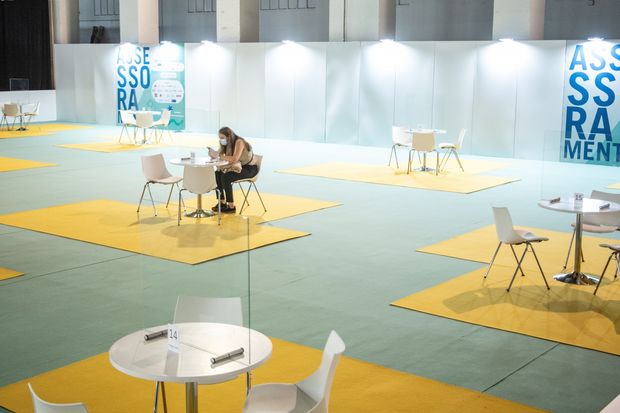 A job adviser wearing a protective face mask waits for participants behind a plexiglass screen, during a job and employment fair on September 21, 2020, in Barcelona, Spain.

The official unemployment rate in the eurozone hasn’t spiked to nearly the same degree as the U.S.

The official eurozone unemployment rate only rose to 7.9%, in July, from 7.2% before the pandemic. In the U.S., the jobless rate spiked as high as 14.7% from 3.5% in March. The U.S. unemployment rate has subsequently declined to 8.4% in August.

But behind those numbers lie two issues that are masking the jobless problem in Europe, according to a new report from Marc de Muizon, an economist at Deutsche Bank in London.

First, he notes, are the furlough programs across Europe. The way Eurostat measures employment, even workers on zero hours are counted as employed. De Muizon estimates between 5% and 10% of all workers were on a furlough program in the four major eurozone economies of Germany, France, Italy and Spain in August.

The Spanish furlough has been unique in that employers there tended to have their furloughed employees completely out of work, rather than just working reduced hours.

Another issue is that those workers who lost their jobs weren’t able to look for a new one. Without school closures and lockdowns, in the second half of 2020 these people should start appearing in unemployment rate statistics, he says.

By the end of 2021, de Muizon expects the official unemployment rate in the euro area to top 10%.

Data released on Tuesday showed the fifth straight gain for eurozone economic sentiment in September. Employment expectations of consumers rose for a fifth month, but remain below the levels of February.