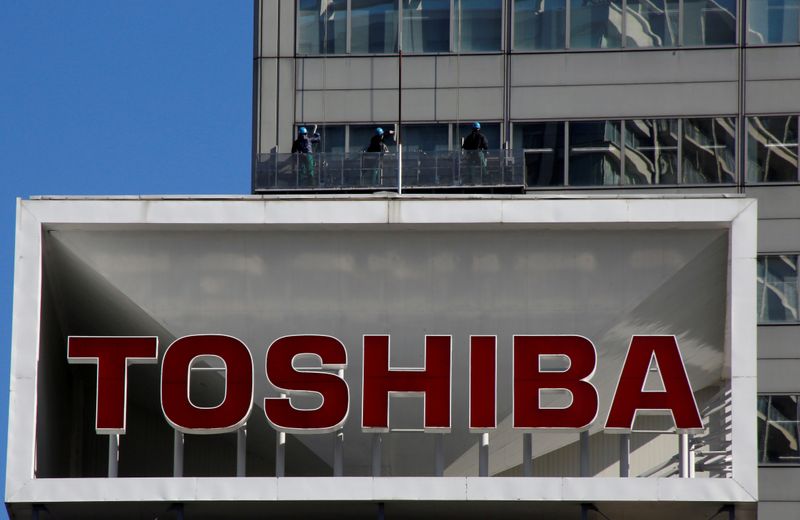 TOKYO (Reuters) – An internal investigation by Toshiba Corp (T:6502) has found about 1,300 postal voting forms for its annual meeting went uncounted, two people familiar with the matter said, adding to concerns about potential governance breaches at the Japanese conglomerate.

The unusually large number of uncounted votes related to a failed attempt by foreign shareholders to elect some new independent directors to Toshiba’s board at the July 31 meeting.

The votes were uncounted because they apparently arrived late, even though the postmarks indicated they normally would not have missed the deadline, the two sources told Reuters, declining to be identified because the issue is still private.

The revelation comes after Reuters last month reported Singapore-based hedge fund 3D Investment Partners, a major investor in Toshiba, had called for a third-party investigation into the meeting, saying its vote had not been fully recognised.

It is likely to further deepen concerns about the treatment of minority shareholders and what appears to be a retreat from the push for better governance and returns under outgoing Prime Minister Shinzo Abe.

Toshiba, which has not yet informed shareholders whose votes were not counted, said it is conducting investigations with its shareholder registry administrator, Sumitomo Mitsui (NYSE:SMFG) Trust Bank (T:8309).

“So far, we’ve been told that vote counting was done properly by our administrator,” Toshiba said in a statement sent to Reuters. “We have also asked Japan Post to investigate the mail delivery situation.”

The voting forms in question all had postmarks indicating they were accepted at post offices close to senders on July 27, the people said.

Most only reached Sumitomo Mitsui Trust’s Tokyo office on July 31 or later, which was after the July 30 voting deadline, they said, suggesting it took four days or more for delivery.

“I can’t think it took more than four days and we confirmed there was no significant delay caused by COVID-19 at the end of July in Tokyo,” spokesman Hideo Murata said.

More than 53,000 shareholders voted via mail, online or by proxy at the meeting. How much voting power the uncounted forms represented in total is not clear, or what caused the delay.

Tokyo Metropolitan University Professor Yuichi Ozaki, a corporate law expert, said the situation could be a reason for cancelling the vote results, depending on what caused the delay.

“Investors had probably assumed that their voting rights would have been exercised when they mailed their voting forms in advance to meet the deadline,” he said. “If their votes were not counted, it means their expectations were significantly defied.”

Toshiba saw a closely contested proxy fight in the run-up to the annual meeting with 3D and another overseas investor, Effissimo Capital Management, each nominating several outside directors.

The shareholder proposals, opposed by Toshiba, failed to gain majority support, but one shareholder-backed nominee gained substantial backing with 43% of the vote.

Toshiba CEO Nobuaki Kurumatani saw a precipitous slide in his support to just 58% from 99% a year earlier – a rare rebuke of a Japan Inc chief executive.

Reuters previously reported Effissimo was kept in limbo by Japan’s government over a key shareholder vote until the day before the annual meeting.

The activist hedge fund needed approval to vote on its proposal under tighter rules on foreign ownership designed to protect industries critical to national security.

A representative for Effissimo said the fund is not in a position to comment. 3D declined to comment.