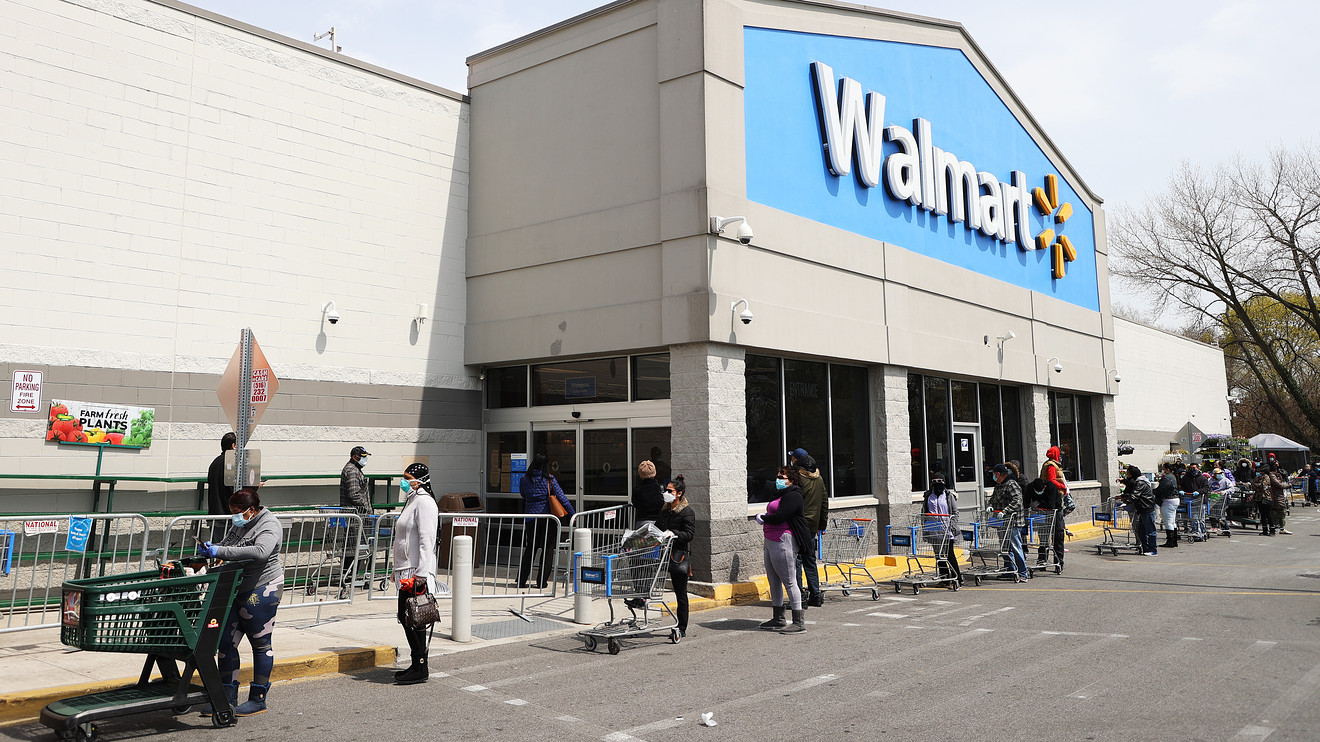 Walmart Inc. gave some of the credit for its stellar fiscal second-quarter earnings to government financial aid that landed in shoppers’ pockets during the coronavirus pandemic, but the lack of progress in Congress on another economic package is forcing analysts to forecast a pullback in coming months in consumer demand.

“[M]y sense is that the… order of tailwinds that impacted the business were: one, stimulus; two, eating at home; three, being at home and all the things that you wanted to do to have the indoors and outdoors be more pleasurable,” Doug McMillon, Walmart’s chief executive, said on the earnings call early Tuesday according to FactSet.

He noted the shift in spending as customers moved their dollars away from things like travel, which the COVID-19 pandemic largely prevented.

Gross profit margin, which was up 63 basis points, also got a bump from government stimulus funds and lower markdowns, among other factors.

Walmart stock fell 0.7% in Tuesday trading despite the blockbuster results. For the year to date, shares are up 13.4% while the Dow Jones Industrial Average DJIA, -0.24% is down 2.7% for the period.

However, the future of government fiscal stimulus remains unresolved with Republicans and Democrats in Congress deadlocked on another package, which brings added uncertainty to Walmarts results in future quarters. Walmart executives note that as stimulus funds ran out, the retailer already saw sales beginning to normalize, though the company says it’s in a solid position thanks to its omni-channel offerings.

Across platforms, Walmart offers purchasing options, delivery, pickup and other ways for customers to shop. E-commerce sales nearly doubled during the quarter, soaring 97%. Walmart currently sells about 25% of all groceries bought in the U.S.

While there’s been a lot of talk about Walmart+, a membership program that will rival Amazon.com Inc.’s AMZN, +4.08% Prime program, McMillon gave no update.

“We think that assortment breadth and other ability to deliver with speed nationally combined with a few other benefits for customers will result in a compelling proposition,” he said. “So we’ve been moving towards a new membership launch. We’ll share more about that membership and timing when it’s appropriate.”

Neil Saunders, managing director at GlobalData Retail, gives Walmart credit for its digital investments and other steps taken amid the pandemic, but he also expressed concern about what the future will look like.

“As robust as these results are, they are more a consequence of external factors than a function of things Walmart has done to engineer growth,” he wrote.

“This means that as the impact of enhanced unemployment benefits and stimulus checks fades, Walmart is likely to see performance drop back. Our data already show a modest slowdown in non-food which could accelerate as more core customers feel a squeeze on their household finances.”

Other analysts are far more focused on the digital sales result.

“Walmart’s Q2 performance, with an almost doubling of online sales, among a litany of expectations-exceeding results, continues to raise the bar for multi-channel retail as the company continues to leverage its massive store base to support its e-commerce initiatives,” said Moody’s vice president Charlie O’Shea.

“The fact that margins actually expanded despite this massive increase in volume and significant COVID-19 costs provides validation that online-oriented operating costs are beginning to be rationalized, as well as an indication that there was some favorable mix shift away from lower-margin consumables and toward higher-margin general merchandise categories.”

Watch:Work from home is here to stay. Here’s what it means for retail

Moreover, O’Shea thinks Walmart will hang on to new customers, in part thanks to the increase in Sam’s Club memberships. The warehouse retailer saw membership income rise 7.8% during the quarter, and new member count was up 60%.

With no end in sight to the coronavirus pandemic at the moment, Walmart stands to gain market share from its chief competitor, thanks to its online ammunition.

Don’t miss:What did people do with their $1,200 stimulus checks? Finally an answer

“As the pandemic lingers on, Walmart is well positioned to grab even more of a market share, especially with small retailers struggling and closing down,” said Haris Anwar, senior analyst at Investing.com. “More importantly, if they can continue to sustain levels of 97% growth in e-commerce sales, they’ll also be taking market share away from bigger competitors such as Amazon too.”