Home
Stocks
FA Center: Here’s why Apple’s stock split might not be so bullish for its shares
Prev Article Next Article
This post was originally published on this site

Apple’s AAPL, +10.46% planned 4-for-1 stock split announcement last week would normally be an extremely bullish signal for the U.S. market. But these are not normal times.

A stock split typically is a bullish signal because it signaled management’s confidence that its stock would perform well in subsequent months and years. That’s because a firm’s managers have a loosely defined “sweet spot” in which they want their stock to trade. If it trades far above that sweet spot, they would split their stock only if they believed the price wouldn’t otherwise fall back into that range.

This bullish effect is confirmed by academic studies. One of the earliest, and most prominent, of such studies was authored by David Ikenberry, a finance professor at the University of Colorado. He found that the average stock undergoing a two-for-one stock split beat the market by 7.9% over the year after the announcement of the split — and by 12.2% over the three years after that announcement.

This effect has become a lot weaker in recent years, for several reasons. One is that highly priced shares don’t present any obstacle to institutional investors, and those large institutions have come to increasingly dominate the market. The second is that retail investors with relatively small amounts to invest are now able to purchase fractional shares. So even they aren’t fazed by a high-priced stock.

Read: How Apple’s stock split will change the pecking order in the 124-year old Dow industrials

(You may not have been aware of this ability to buy fractional shares of a company, since only this year have the biggest discount brokerage firms — notably Fidelity Investments and Charles Schwab — made it possible for clients to do so. But for several years now a number of smaller online brokerages have given clients this ability.)

Regardless of the reasons, there’s little doubt that stock splits have become far less common. Over the course of the nine calendar years from 2011 through 2019, for example, there was a 75% reduction in the number of forward splits within the S&P 1500 index.

To be sure, just because the decades-ago rationale for splitting shares has weakened doesn’t mean it no longer has any bullish significance. To find out how much it may have been lessened, I turn to a newsletter entitled 2-for-1 Stock Split Newsletter, which editor Neil MacNeale created in 1996. His strategy calls for him, each month, to purchase a stock for his model portfolio that had recently split its shares, and hold it for exactly 30 months. This portfolio was initially so successful that an ETF was created based on it (the Stock Split Index Fund).

Due to a lack of interest, this ETF closed in 2017, and the trend towards fewer and fewer splits surely didn’t help. Earlier this year, in fact, MacNeale wrote: “Because of the lack of split announcements, our ability to ferret out the future winners from the rest of the market has been greatly diminished.”

Even though this ETF was closed, the NYSE continues to calculate the performance of the stock split index to which it was benchmarked. This index is plotted in the chart below. Notice that, while it has handily beaten the Wilshire 5000 index on a total return basis since 1996, its lead over the Wilshire hasn’t widened much over the past decade. (This is evident from the logarithmic scale in the chart: The distance between the two lines has stayed relatively constant since 2009.) 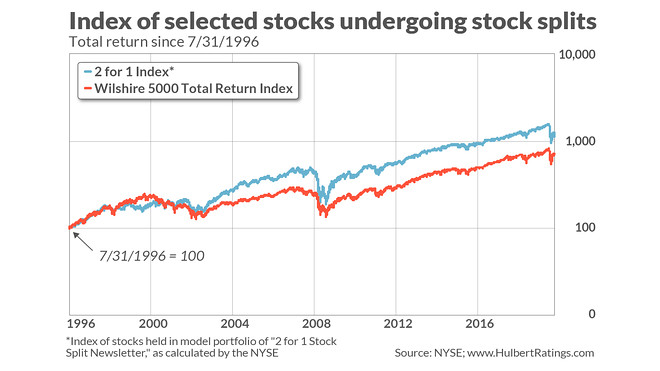 None of this means that Apple’s stock won’t continue its remarkable rally since the U.S. market’s March lows. The question is whether, because of the split, it will rally more than it would have otherwise. The answer to that question is very much in doubt.

More: Apple is splitting its stock after a massive quarter — 3 things retail investors should know before they take a bite

Plus: Big Tech stocks are on the cusp of creating a setback for indexes