Home
Stocks
Need to Know: After that 41% ‘moonshot’ for stocks, here’s what one strategist is telling investors to do next
Prev Article Next Article

A rally for technology and Chinese stocks has provided recent fuel for markets to keep rising and shake off concern around climbing U.S. COVID-19 cases. But pandemic worries may return on Thursday, as the daily deaths show signs of rising in the U.S., alongside a record jump in cases and the highest testing rate in a month.

Also on tap are the weekly jobless claims. To be sure, all that is leaving stocks a bit undecided in the early going.

Our call of the day comes from David Donabedian, chief investment officer at CIBC Private Wealth Investment, who tells MarketWatch that the V-shaped market we’ve seen since February — “an almost perfect peak” of a 34% decline followed by a 41% recovery for the S&P 500 SPX, +0.78% through June — is likely over and we’re facing a flat market with lots of volatility in the months ahead. 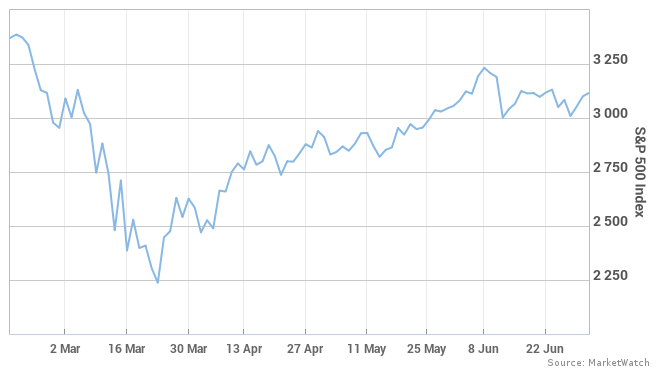 What to do? “After that 41% moonshot for equities, I don’t think this is a market you should chase, it’s also not a market that should be aggressively sold, because of all the liquidity that’s piled up. It comes down to don’t fight the Fed, but don’t chase this market,” said Donabedian.

We’ve moved into a “different sort of environment, one that is going to be more of a balance between risk and reward,” he says. There’s plenty of Federal Reserve support left to feed into these markets, but equities have also priced in a lot of “positive outcomes in what is still a very uncertain environment,” he adds.

And while it’s easy to construct a pretty bearish view of markets right now, as earnings collapse and the market looks “wildly overvalued,” and COVID-19 news is likely to be good and bad, all that liquidity washing around in the economy and fiscal packages passed in Washington are something to bear in mind.

“One approach for the long-term investor is to step back and view this market like an investor rather than a short-term trader, and that leads you to some conclusions about which parts of the market are likely to be more portfolio over time,” said Donabedian.

After the first half, parts of the tech and health-care sectors and other select niches have seen improved long-term growth prospect following the COVID-19 chaos, while other sectors have fared less well, he notes.

For those investors focused more on the short term, that probably means more of getting ready for some underperforming sectors, at least temporarily, to recover a bit — as was seen in late May and early June, when financials, energy stocks and industrials rose.

Our chart of the day from the New York Times shows how investors using the free trading app Robinhood traded “the riskiest products and at the fastest pace” in the first quarter of 2020 versus those using E-Trade and others: 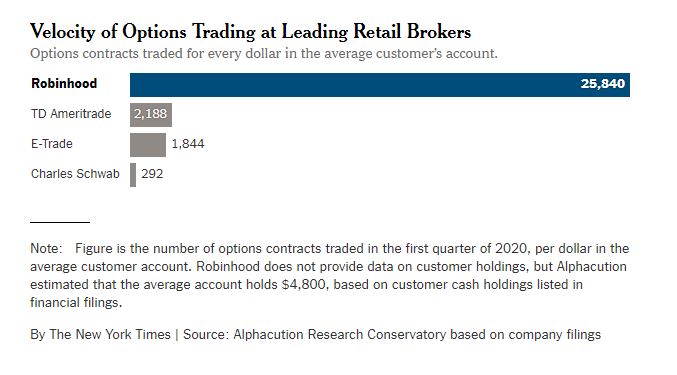 Read:Yes, Robinhood is making money off those day-trading millennials

Chinese Foreign Minister Wang Yi says it is time to bury the hatchet with the U.S.

No roller coaster ride-screaming in Japan.

Thousands are ready to “Strike for Black Lives.”