Home
Market
Automakers rev up U.S. assembly lines, wary of outside risks to workers
Prev Article Next Article
This post was originally published on this sitehttps://i-invdn-com.akamaized.net/trkd-images/LYNXMPEG5H105_L.jpg 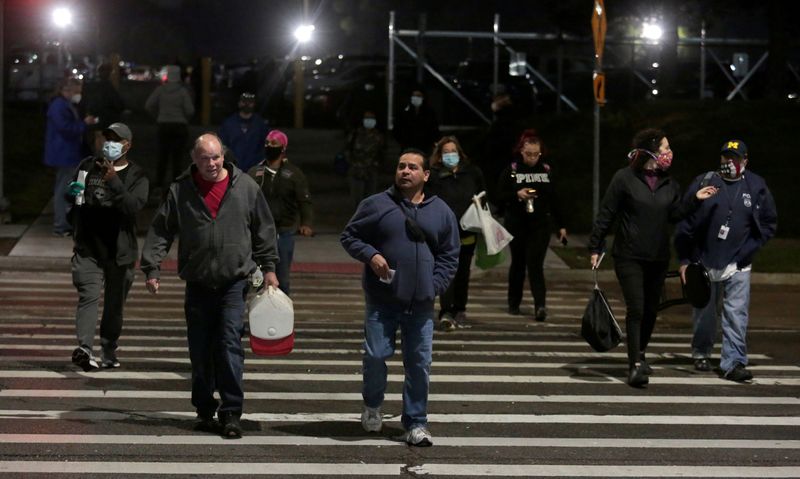 DETROIT (Reuters) – Automakers are speeding up U.S. assembly lines to meet recovering demand, increasingly confident coronavirus safety protocols are working to prevent outbreaks in their plants but wary of the challenges workers face outside.

Screening workers for COVID-19 using temperature scans and questionnaires, the automakers have detected some people who reported for work despite being sick. Some plants have been briefly shut down for disinfection, but so far, there has not been a major outbreak within a U.S. auto plant since most reopened May 18, company and United Auto Workers union officials said.

The risk of an infection picked up outside a plant spreading along assembly lines remains a prime concern, however. An outbreak could shut down a factory costing a manufacturer millions of dollars a day. The disruption caused by the pandemic is creating other challenges as well.

At Ford Motor Co ‘s (N:F) F-series pickup truck plant in Louisville, Kentucky, the company has given more than 1,000 workers leave related to COVID-19 concerns. It hired temporary workers to fill their jobs as the plant accelerates production of trucks critical to Ford’s financial recovery.

Demand for pickup trucks helped boost U.S. auto sales in May, and contributed to stronger than expected overall U.S. retail sales for the month.

Officials of UAW Local 862, which represents workers at the Louisville plant, said a lack of child care was a significant issue for members. It had led many to stay away from the plant and collect increased unemployment benefits provided under the federal CARES coronavirus relief act.

“As we have rolled out this program in Kentucky and elsewhere, the number of people gone under the CARES Act has dropped,” Johnson said.

On the job, auto workers are required to wear masks and face shields, sit or stand six feet (1.83 meters) apart and avoid touching, following protocols the major manufacturers and the UAW have jointly developed. But outside the plant, there is widespread flouting of mask and social distancing recommendations nationally, union and company officials said.

With COVID-19 cases rising in some states where it has factories, Toyota Motor Corp (T:7203) within the past week has redoubled efforts to tell employees at its U.S. plants that the safety protocols they observe on the job should be carried into their lives away from work. The company is adopting the slogan “Safe Anywhere.”

“Once people leave the plant and leave the gates, it becomes hit or miss,” said Norm Bafunno, vice president of manufacturing for Toyota’s North American operations.

Toyota has identified 40 plant employees who came to work, reported symptoms or risk factors for coronavirus infection and turned out to have the virus, company spokeswoman Kelly McNeff said.

Managers and workers are trying to improve on the safety procedures instituted when factories reopened. A concern across the industry is how uncomfortable it can be to wear a mask on a fast-moving assembly line as heat and humidity rise.

Toyota workers are testing face screens that have small fans installed at the top, run from battery packs, Bafunno said.

At Ford, the company is producing enough masks on its own that it can now offer workers up to five a day.