Home
Stocks
Key Words: Citi just put a $400 price target on Apple, but this fund manager sees the stock going much higher than that
Prev Article Next Article
This post was originally published on this site

“ ‘The 5G launch will be a kickoff to a possible supercycle that everyone’s looking for. It’s expected to launch in September. The wearables like AirPod and Apple Watch continue to grow. But we like the services with subscription, streaming, TV, gaming, the credit card.’ ”

Those are the “drivers of growth” that Todd Gordon, managing director at Ascent Wealth Partners, believes will propel Apple AAPL, +0.56% all the way up to $490 a share.

This bullish call, which Gordon made on CNBC, follows Citi’s move on Tuesday to raise its price target on the stock to $400, which is the highest of all Wall Street banks.

For Gordon, it’s not just the growth of the business that will push the stock toward $500.

Here’s the chart CNBC used to illustrate that path: 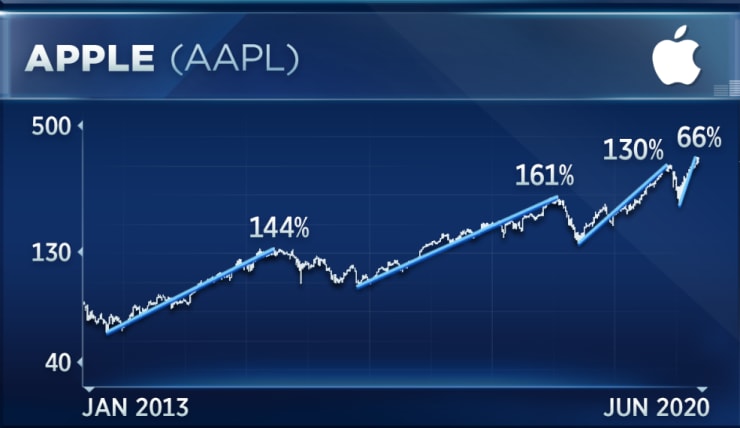 As it stands now, Apple shares are dancing around all-time highs, up slightly in Wednesday’s sessions, with the Dow Jones Industrial Average DJIA, -0.06% , S&P 500 SPX, +0.00% and Nasdaq Composite COMP, +0.44% clinging to positive territory.