Home
Stocks
The Number One: Spam, biscuits and crawfish: These are most popular pandemic food delivery orders by state
Prev Article Next Article

It probably depends on where you live.

Yelp YELP, -1.23% had one of its data scientists mine the text of dish names being ordered on its app and review site since shelter-in-place orders began on March 16 to determine what Americans have been craving as the pandemic has upended life around the country.

Indeed, Americans have been getting more food delivered from restaurants due to the COVID-19 outbreak, turning to apps like Grubhub GRUB, +1.70%, DoorDash and Uber Eats UBER, +1.77%, or ordering directly from local eateries.

In mid-April, more than one in five U.S. adults (22%) said they had food delivered, which was up from 19% the week before, Axios reported. And the percentage of parents using delivery apps increased from 16% to 20% between February and March, while non-parents saw their share increase from 27% to 28%. Grubhub saw delivery demand spike 30% in March, which is the most sudden change it has seen.

The mastermind, identified as Samuel Hansen, then quantified how frequently a dish was ordered in each state relative to its popularity in other states. He also standardized dish names, such as shortening “two pieces of fried chicken” to “fried chicken,” before identifying the most regionally popular food-delivery items.

And pizza was the overall most popular takeout food across the country, which the analysts said came as “no surprise” since it tends to be cheap and “delivers well.”

But things get much more interesting when you dig into the data by each individual state, especially since many sit-down bars and restaurants have shifted to takeout and delivery service while in-house dining is temporarily banned under social distancing guidances. So there’s plenty of unique dishes topping the list, apart from the usual favorites like tacos and Buffalo wings that you might expect. 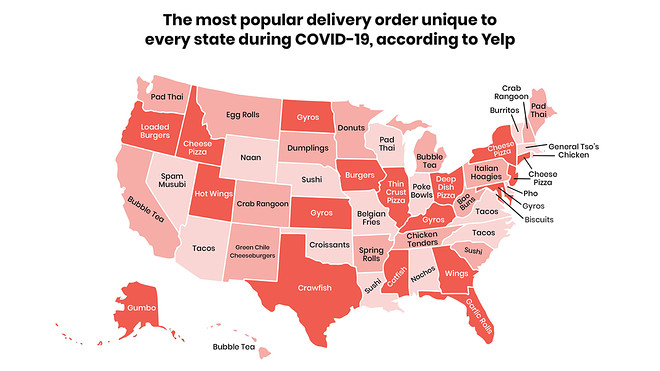 Crawfish is the top dish in Texas, as locals continue taking advantage of the peak crawfish season there. Houston’s Boil House was raved about on Yelp, in particular.

The nation’s capital is scarfing down biscuits, with D.C. residents referencing the goat cheese and herb biscuit sammie at A Baked Joint a whopping 317 times.

Missouri customers want you to show them some Belgian frites, while Nevada bets on Spam Musubi, a Hawaiian take on sushi that sandwiches a slice of grilled Spam between rice and nori. Hawaiians, on the other hand, are ordering bubble tea the most, as are customers in California and Michigan.

A plain slice is still the go-to in New York and New Jersey, where cheese pizza reigns supreme, while those in Illinois are apparently ditching their signature deep-dish pies for thin crust pizza of late.

So here’s the most popular delivery order unique to every state during the COVID-19 pandemic.