Home
Market
U.S. banking regulator Otting to exit, his deputy to serve as acting chief
Prev Article Next Article
This post was originally published on this sitehttps://i-invdn-com.akamaized.net/trkd-images/LYNXMPEG4K1GW_L.jpg 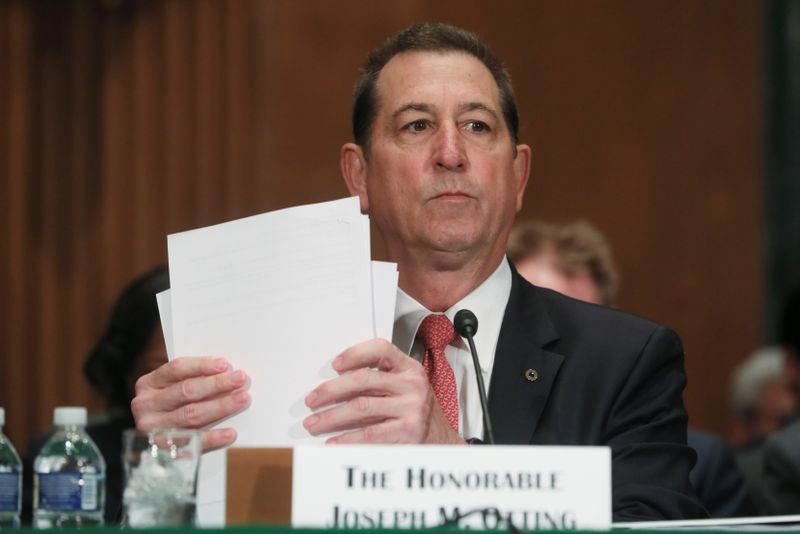 WASHINGTON (Reuters) – Joseph Otting, the head of a top U.S. banking regulator and former CEO of California’s OneWest Bank (N:CIT), is stepping down from his government post after two and a half years, he announced on Thursday.

Brian Brooks, Otting’s top deputy at the Office of the Comptroller of the Currency, which oversees lenders including Wells Fargo and Citibank, will lead the agency as acting head.

Brooks, who joined the agency in April as chief operating officer, previously worked with Otting at OneWest and has also held senior posts at housing finance giant Fannie Mae and cryptocurrency exchange Coinbase.

A close associate of U.S. Treasury Department Secretary Steven Mnuchin, who helped created OneWest, Otting was appointed by the Trump administration in 2017 to cut red tape.

Otting, who had been known to refer to the banks he oversaw as “customers,” simplified and eased some rules for large national banks and slashed how much the regulator charged lenders to cover the costs of monitoring them.

He said in a statement he was “extremely proud” of the OCC’s efforts to “eliminate unnecessary regulatory burden and operate the agency in a more effective and efficient manner.”

That frequently made him a target of progressives, in particular bank critic Democratic Senator Elizabeth Warren, who frequently sparred with Otting at congressional hearings.

But Otting surprised industry executives by taking a tough line on Wells Fargo (N:WFC) as it struggled to recover from multiple product mis-selling scandals. In January, the OCC levied an unprecedented $58 million penalty on eight of its former executives.

In his final act as a regulator, Otting pushed through a rewrite of rules which require banks to lend to lower-income communities, with an eye toward making it easier for lenders to achieve a passing grade – a measure loudly criticized by Democrats and consumer advocacy groups.