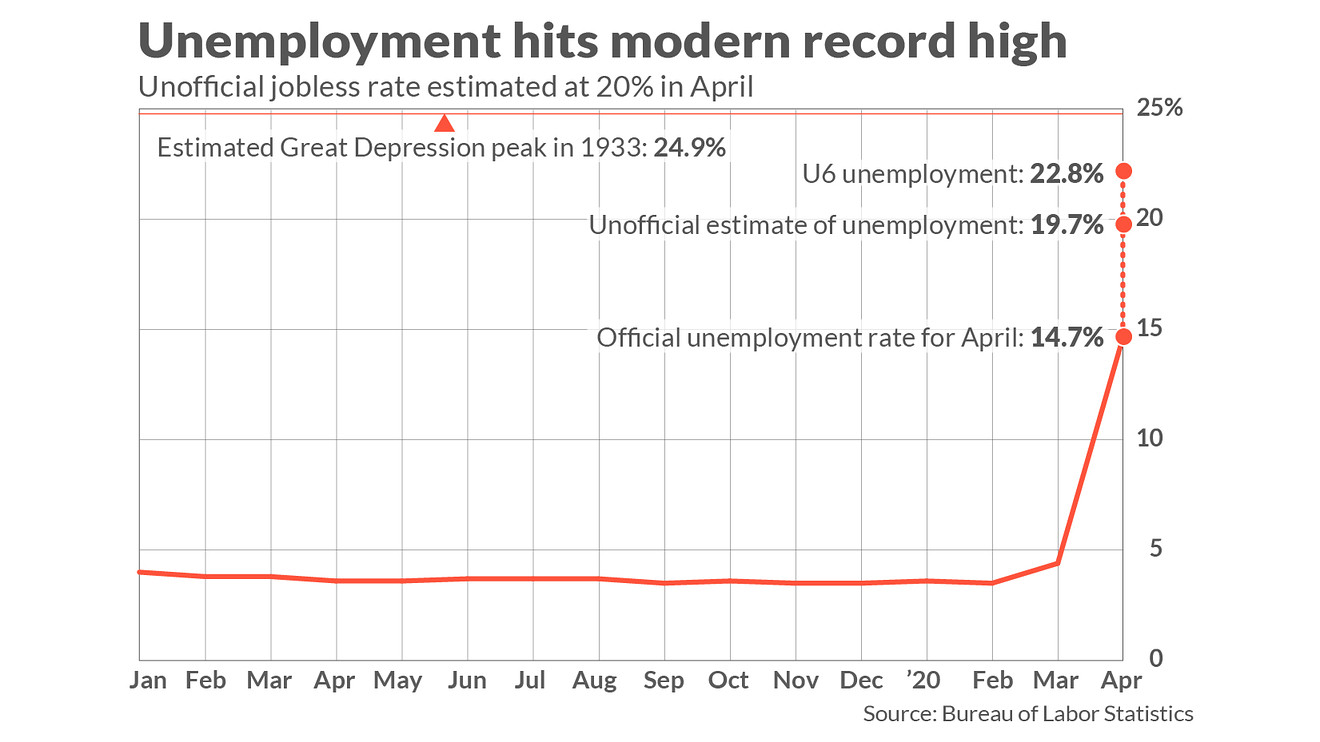 The U.S. unemployment rate exploded to 14.7% in April after more than 20 million jobs were lost to the coronavirus, but that is just the official number. The real jobless rate was at least 20%.

How so? The Bureau of Labor Statistics said not all workers accurately responded to a question about their employment status. Some people who weren’t actually working but still considered themselves as having a job didn’t end up being counted as unemployed. Furloughed workers, for instance.

Had these workers answered the government’s monthly survey correctly, the BLS estimates the “overall unemployment rate would have been almost 5 percentage points higher than reported.”

That’s nearly twice the previous record high of 10.8% in 1982 or the peak level of unemployment during the 2007-09 Great Recession.

“The unemployment rate ‘only’ rose to 14.7%, but the ‘real’ number is worse,” noted Neil Dutta, head of economics at Macro Renaissance Research.

The government first began issuing monthly unemployment figures after World War II. Some records were kept as far back as the early 1900s, but they were not complete and comprehensive.

Read:Older workers have been clobbered by the coronavirus unemployment crisis

The highest level of unemployment in American history occurred in 1933, economic historians say. The rate of joblessness is estimated to have peaked at 24.9% during the worst of the decadelong Great Depression.

A broader measure used by the government that takes a deeper look at unemployment suggests the labor market is hurting almost as badly now as it was in 1933. The so-called U6 rate leaped to 22.8% in April from just 6.7% at the end of the 2019. That was the lowest level since the government began keeping track in the early 1990s.

The U6 rate includes people who have gotten too discouraged to look for work, those who can only find part-time jobs and other people on the fringes on the labor market. Seen from that vantage point, nearly one-quarter of the entire U.S. workforce was either unemployed or underemployed in April.

Great Depression 2020? Let’s hope not. But the situation at the end of April was undoubtedly dire. And economists say it will take a long time for the damage to be reversed.

“A lingering high unemployment rate will be a fundamental challenge for the U.S. going forward,” said chief economist Robert Dye of Comerica Bank.