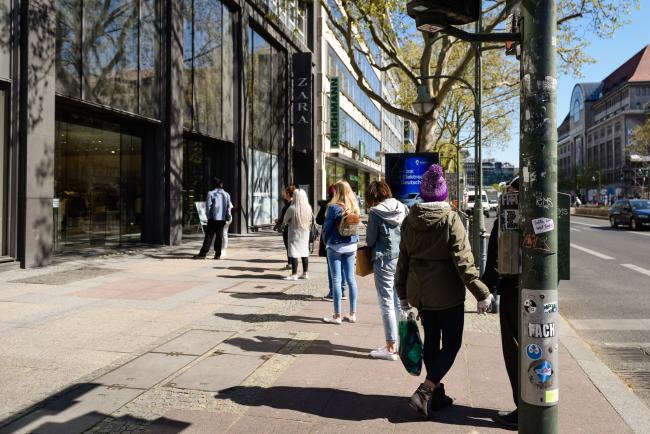 “It almost feels like wartime for us, because our work collapsed under our feet from one day to the next,” said the head of Seetel, a 40-million-euro ($43 million) a year hotel group which is the largest on Usedom.

Like many other business leaders across Germany, Seelige-Steinhoff is eagerly awaiting a meeting between Chancellor Angela Merkel and the 16 state premiers on Wednesday in which the government wants to hash out a roadmap for a gradual reopening of Europe’s largest economy.

Pressure has been mounting on Merkel in recent days to speed up the country’s exit from lockdown after the fight against the coronavirus outbreak sent the German economy into a tailspin. It is forecast to shrink by 6.3% in 2020, more than even during the financial crisis a decade ago, according to government projections.

After being forced to close since mid-March, economic hardship is eroding the patience of many businesses. From family-owned firms to the nation’s flagship airline Deutsche Lufthansa AG (OTC:DLAKY), many companies are struggling even though the government has fast-tracked more than 1 trillion euros in emergency loans and other forms of aid.

The Association for Small- and Medium-Sized Businesses, which represents the backbone of the Germany economy known as the Mittelstand, last weekend accused Merkel and the state leaders of a lop-sided focus on containing the pandemic that puts the country’s economic future in jeopardy. “Lift the lockdown before it’s too late,” the group said.

“We need clear and nationwide rules now on store opening hours,” said Stefan Genth, managing director of the country’s retail federation HDE, adding that the crisis will continue long after all retailers are allowed to sell their goods again. “Even with stores open people are only buying the minimum necessary,” he said.

Merkel has taken a cautious, step-by-step approach to relaxing the curbs imposed in the fight against the coronavirus, highlighting the fine balance governments across Europe are trying to strike between getting the economy going and preventing a second wave of infections.

Late last month, the government and the state leaders allowed some small shops, hardware stores and car dealerships to reopen, while this week hairdressers and, in part, schools have restarted. There’s also been a last-minute deal to reopen restaurants in mid-May, Deutsche Presse-Agentur reported on Tuesday night.

In the last few days it has looked as if the German chancellor might be struggling to achieve a consensus this time around. Several regional state leaders, eager to grab the public spotlight, have jumped the gun in recent days and announced their own easing plans, creating the potential for a patchwork of contradicting rules.

On Tuesday, Bavarian Premier Markus Soeder presented the state’s own timeline for reopening all stores, hotels and restaurants this month in what he hopes will serve as a blueprint for the rest of the nation.

Merkel’s Christian Democratic caucus leader on Tuesday criticized state premiers for announcing their own plans ahead of the consultations with the chancellor. “I urgently appeal to the state leaders to follow a coordinated course here”, Ralph Brinkhaus said on Tuesday in Berlin. In an effort to forge consensus, Merkel’s chief of staff, Helge Braun, has been working the back channels with his counterparts in the states.

At a caucus session on Tuesday, Merkel said further easing made sense at this stage as there has been a lot of progress in fighting the virus in the past few days, according to a participant of the meeting. But she also warned that if there is a renewed outbreak with more than 50 acutely infected per 100,000 inhabitants in a given region, then local curbs will have to be reinstated to prevent the virus from spreading.

Back in Usedom, Seelige-Steinhoff is hoping that the political leaders will come out with a clear timetable that will allow him to once again host guests from all over the country. In the meantime, he is going out of his way to adopt a comprehensive hygiene plan to help draw customers. Measures include distancing between waiters and dinner guests, laminating TV remote controls, and installing acrylic glass walls in front of the reception.

“We’re doing everything we can to keep guests safe,” he said. “The sooner we can reopen, the better.“