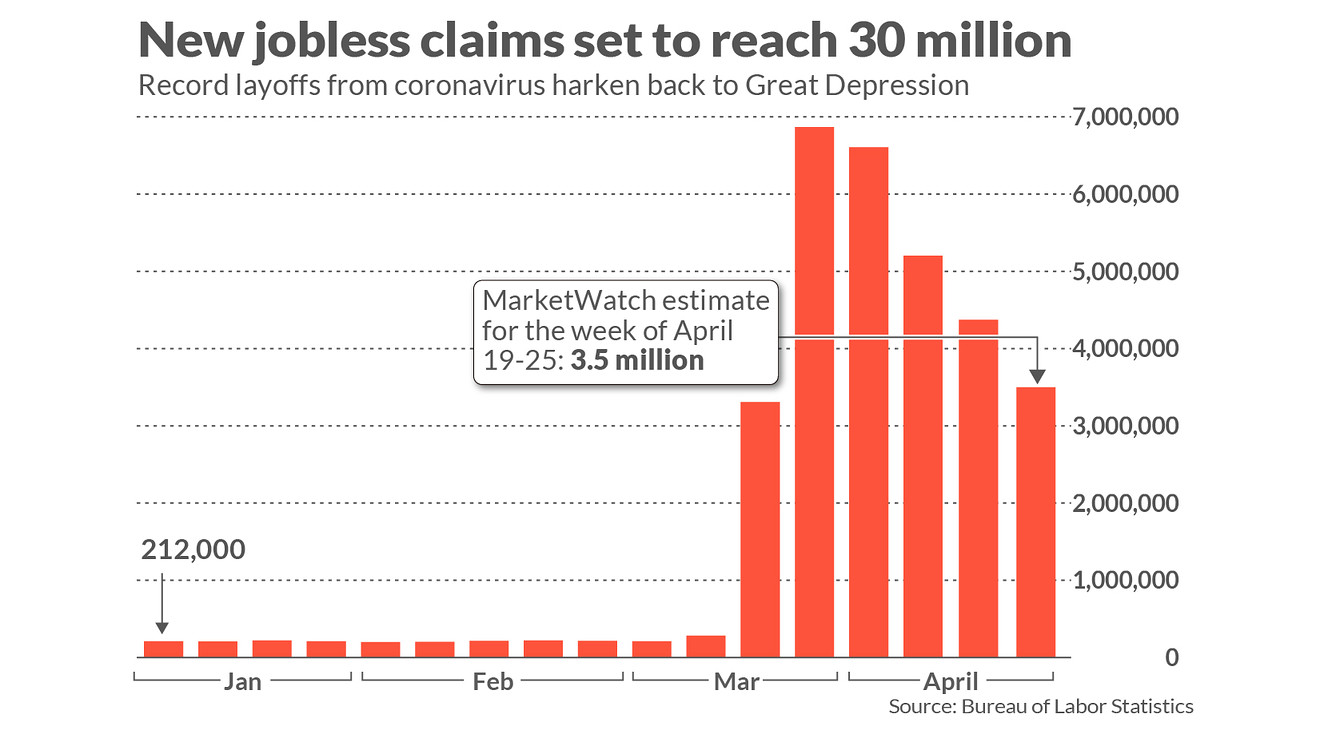 The flood of Americans seeking unemployment benefits after losing their jobs in the coronavirus pandemic is slowing, but another several million Americans probably filed jobless claims to bump to total to almost 30 million in the latest week.

Initial jobless claims likely rose about 3.5 million in the week running from April 19 to April 25, according to economists polled by MarketWatch. That would be half as many as during the pandemic peak, but still shockingly high. Just a few months ago, claims were running in the low 200,000s and stood at a 50-year low. The Labor Department is due to publish the latest data on Thursday.

“While the number of initial jobless claims has started to recede from unprecedented levels, initial claims are likely to remain elevated for some time,” said Sam Bullard, senior economist at Wells Fargo.

Read:GDP sinks 4.8% in first quarter. Biggest drop since 2008 a prelude of worse to come

So far just over 26 million people have successfully filed claims — that is, they were able to get their applications accepted by state unemployment offices. Many states such as New York and New Jersey have a backlog of claims they are still trying to process, leaving countless people frustrated and unable to receive money.

Another large group of applicants, likely totaling several million, have either been denied benefits or are still awaiting approval. The federal government has increased weekly benefits by as much as $600 a person and made many more people eligible who had not qualified in the past, but some states were slow to get up to speed in adjusting their computer systems to handle these claims.

Read:Millions of workers who’ve applied for jobless benefits still not getting money

The huge increase in unemployment in the past two months has probably driven the jobless rate to 15% or higher — numbers last seen during the Great Depression some 90 years ago.

Read: Why the U.S. economy’s recovery from the coronavirus is likely to be long and painful

The extra benefits are designed to help people get by for a few months in the hopes that the economy will start to reopen and things can return to normal, but many economists and health experts warn a full recovery is unlikely barring the creation of successful treatments for COVID-19.