Home
Stocks
In One Chart: ‘Explosive downside protection’ sparks a 57.2% return for these investors
Prev Article Next Article
This post was originally published on this site

Back in March, Mark Spitznagel, founder of Universa Investments, explained his approach to cashing in on crisis situations like the one currently facing the global economy.

And make a whole lot he did. Spitznagel made far out-of-the-money “explosive downside protection” that delivered a 4,144% return when the first wave of the coronavirus selling took hold.

But his fund isn’t the only one of its kind making a killing in this market.

According to Eurekahedge, “tail risk” hedge funds have surged, on average, 57.2% in 2020, capitalizing on the pandemic. This after nearly a decade of red ink, as you can see by this chart: 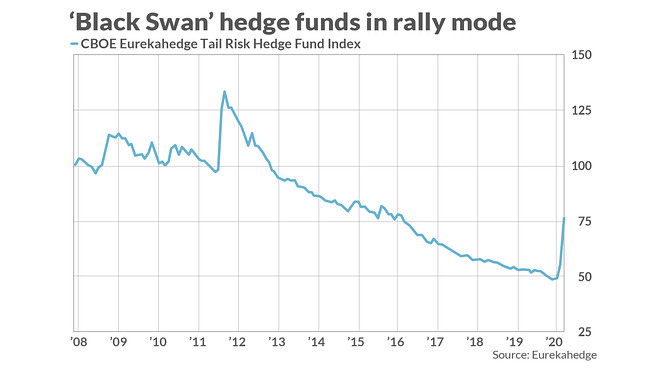 These funds typically aim to cash in on market drops by using options and other derivatives as cheap bets that pay off in a big way when it all goes south but drag on portfolios in bull markets.

“The virus is popping the bubble,” Spitznagel told the Financial Times. “Markets were priced for perfection, but all of a sudden the world lost its veil of perfection.”

Along with Spitznagel’s fund, New York-based Capstone’s “tail risk” strategy rallied 350% in the first quarter while 36 South Capital Advisors of London tallied a 130% gain in its $2-billion fund.

Still, even though these funds are having a fantastic year, they are still down 24%, on average, since the start of 2008, despite the fact that, as the FT points out, three crises have slammed markets — the financial crisis, the eurozone debt crisis and the one we’re seeing today.