For seven centuries the Palace of Westminster has served as a beacon of democracy, housing the English and later British Parliament.

But the coronavirus pandemic has succeeded where Guy Fawkes, who tried to blow up Parliament in 1605, failed. On Wednesday democratic debate from the famous green benches will be displaced for the first time since the Blitz as parliament goes online.

Earlier in the week a small group of MPs passed measures which mean they will now check into the chamber via Zoom ZOOM, -25.00% while a token few, socially distanced, will still attend in person. Members of the upper chamber, the House of Lords, will use Microsoft MSFT, -4.13% instead.

It was a packed House of Commons in 1940 that heard Winston Churchill say “We will fight them on the beaches,” and the same building in 1990 where Margaret Thatcher said “No, no, no” to greater EU control.

But from Wednesday it is going digital. It will house no more than 50 members, with up to 120 more allowed to question ministers on big-screen televisions set up in the chamber.

Read:A million Brits are set to have their wages paid by the state, as firms rush to join new compensation scheme

The Leader of the House of Commons, Jacob Rees-Mogg, praised the adaptation, saying on Twitter TWR, +5.38% :  “The Black Death in 1349 stopped Parliament sitting but thanks to technology and Mr. Speaker, we will not be prevented from returning in a slightly different form.”

The U.K. will follow Wales, thought to be the first country to host a virtual parliament, with the usual jeers being replaced by speeches amid what is likely to be a backdrop of bookshelves, jumpy internet connections, and unavoidable background noise.

New Zealand has been pioneering Zoom. But a party leader in New Zealand said: “Zoom ain’t gonna cut it,” as the country plans a return to in-person proceedings. The U.S. Houses of Congress still hosts 530 members, some of whom have already tested positive for the virus. 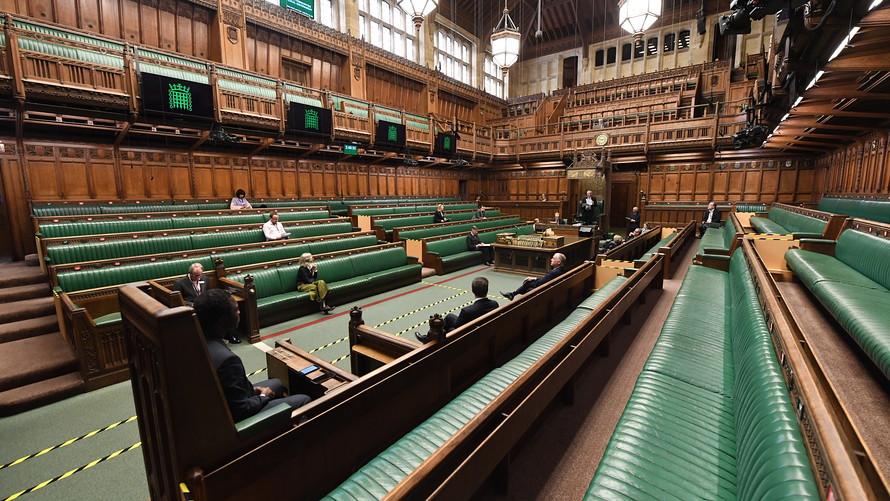 Parliament has been lined with screens which will allow members to enter the chamber via video-link.

The screens on which U.K. politicians will appear now line the chamber walls, while tape marks the floor where MPs can stand at a safe distance from each other, and seats are marked with ticks or crosses telling members where they can sit.

Members of the Lords meanwhile are normally entitled to up to £313 ($380) tax-free for signing in to the house, which is meant to help with travel expenses. Some Lords, many of them elderly and so deemed vulnerable, are demanding that the expenses be paid even to those attending virtual sittings, according to media reports.

The chamber of the House of Commons is designed so opposing sides can engage in heated debate. But with limited sittings, reduced attendance, and members spread between more than 100 living rooms, kitchens, and bedroom offices, the temperature of debate will undoubtedly cool until the coronavirus crisis abates and Parliament can return to its offline origins.