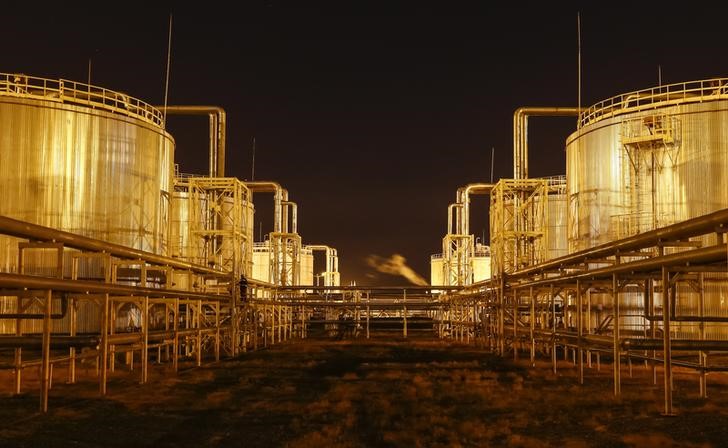 Investing.com — Oil and gas stocks are doing Tuesday what you expect them to do when the price of a barrel of oil is somewhere near minus $35 and the price of an oil barrel is $155.

Everything is down, the only question is by how much. The answer depends, to a large degree, on how close your relationship is to your respective sovereign, because that is a relationship you’re going to need real soon. It also depends on how much your stock market reflects real supply and demand.

The best-performing stocks in the sector are Saudi Aramco (SE:2222), down 1.8%, and Gazprom (MCX:GAZP), down 2.2%. Both are state-controlled and have the implicit backing of a combined $800 billion or so of foreign exchange reserves. That keeps default risks suppressed, and the relatively solid borrowing costs support the equity price. Just as importantly, the two companies have more reserves than any other on earth. Under any conceivable scenario for global energy demand, they are indispensable.

Integrated majors may also seem indispensable, but that’s all relative, especially since the backing of sovereigns that are already setting end dates for net carbon dioxide emissions will obviously be harder and dearer to come by. Equinor (NYSE:EQNR) shares kept losses to only 2.2%, but BP (LON:BP) shares and Royal Dutch Shell (LON:RDSa) shares were down by 3.7% and 4.1%, respectively, as doubts about their precious dividends rose to a clamor.

At the bottom of the performance table are those for whom dividends are just a fond memory and survival is the only game in town: the service companies. Investors are pricing in the effective death of capex across the sector, and after horrible quarterly updates in the last two sessions from Schlumberger and Halliburton, it’s hard to argue with that assessment.

Seadrill (NYSE:SDRL) shares were down 8.9% as it continued its dance with a second bankruptcy in a decade. Schoeller-Bleckmann (VIE:SBOE), an Austrian midcap with a small but perfectly respectable business in north America, was down 6.9%. For context, SBOE is now trading at around half the level it was at in early 2016, the last time the industry thought the apocalypse had arrived.

U.K.-based Hunting PLC (LON:HTG) was down 7.3%, Weir Group (LON:WEIR) was down 4.7% and Petrofac (LON:PFC) – whose focus on the middle east made it seem a relatively safe bet until Abu Dhabi scrapped a $1.6 billion gas contract last week – was down 7.1%, only a whisker above the all-time lows it hit in March.

As for the commodity itself, well, anyone who thought that Monday’s price action was just a brief, technically-driven overreaction is being swiftly disabused of that illusion. By 5:30 AM ET (0930 GMT) The June contract for U.S. crude was down 29% at $14.43 a barrel, while Brent futures were down 25% at $19.12. When there is nowhere left to store oil, there is nowhere for investors in the sector to hide either – except perhaps in the protective folds of nanny state’s skirt.