Home
Stocks
Outside the Box: Trump surpasses even Hoover at mismanagement and the coronavirus fallout proves it
Prev Article Next Article
This post was originally published on this site 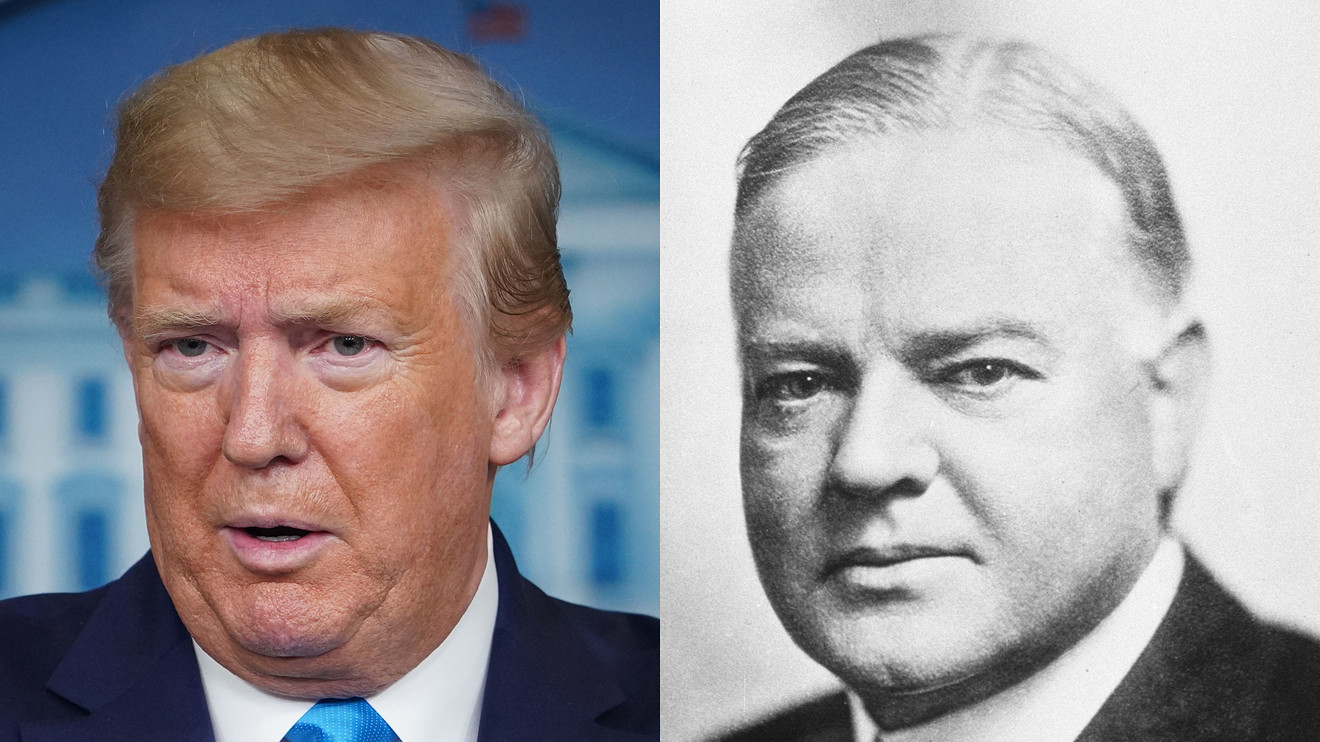 In the theme song to the 1970s sitcom All in the Family, Archie and Edith Bunker sing a nostalgia-filled ballad, longing for the old days, and concluding that “we could use a man like Herbert Hoover again.”  Since President Hoover himself is synonymous with presidential failure, the line makes the Bunkers sound like foolish ignoramuses.

It’s no surprise that Hoover’s name is a punch line — after all, he presided over the nation’s descent into the Great Depression following the October 1929 stock market crash.  As the financial crisis worsened, Hoover had no answers — and made some enormous mistakes (signing into law the Smoot-Hawley tariff act, for one). He also had a habit of prematurely declaring victory, including in a May 1930 speech when he proclaimed: “I am convinced we have passed the worst and with continued effort we shall rapidly recover”.  As it turned out, the Depression continued for another decade and Hoover was summarily dispatched from office in the November 1932 election, with his Republican party banished from the White House for the next two decades.

As the U.S. navigates deeply troubled economic waters, it is tempting to consider whether Donald Trump is a modern Hoover.  The similarities jump out: tariffs adding to economic misery; a president spiking the ball at the 50-yard line and understating the depths of crisis.

There are also important differences — some of which are likely more instructive than the similarities.  Some historians argue that Hoover has gotten a bad rap.  There’s no way to sugarcoat the reality that Hoover failed to prevent the country from falling into the depths of a historic economic depression. But Hoover, unlike Trump, was in fact a highly successful businessman — not just a celebrity who built a reality-TV myth of phony managerial ability.

Moreover, unlike Trump, Hoover had genuine managerial skills, forged in the fire of international crisis. During World War I, Hoover created an organization that delivered relief to starving people in Europe.  The historian David M. Kennedy writes that “As much as any one man could, [Hoover] got the credit for reorganizing the war-shattered European economy.”  In 1920, Franklin D. Roosevelt said Hoover was “certainly a wonder and I wish we could make him President of the United States. There could not be a better one.”

More: A commander-in-chief who cannot do the job ‘must resign — immediately,’ writes presidential scholar

When Hoover was elected president in 1928, one journalist wrote that “the whole country was a vast, expectant gallery…We had summoned a great engineer to solve our problems for us; now we sat back comfortably and confidently to watch the problems being solved.”  While Hoover’s skills did not allow him to find a remedy for the unfolding catastrophe he faced as president, the challenge posed by the Great Depression may have been too much for any president to resolve (especially given the much smaller federal government of Hoover’s day).  Ultimately, it took World War II to decisively dispatch the dark clouds of economic misery.

It’s easy now to laugh at Archie and Edith Bunker, but these times might well call for a man like Herbert Hoover — accomplished crisis manager and “wizard of logistics.” Trump’s son-in-law Jared Kushner recently remarked, with no apparent sense of irony, that “what a lot of the voters are seeing now is that when you elect somebody…think about who will be a competent manager during the time of crisis.”

Trump’s incompetence has been on display as he has demonstrated complete inability to deal with the crisis we face. Unlike Hoover, Trump’s managerial skills are entirely make-believe. The stakes could not higher, as mismanagement becomes a failure to supply hospitals, doctors and nurses crying out for essential protective equipment, and a daily, mounting human toll.

In fact, Trump is facing two crises. First is the coronavirus pandemic itself — a public health emergency that requires managerial, logistical, political and crisis management skills. Trump has none of these. Under these circumstances, any president would do best to let “the subject matter experts take the lead,” as Juliette Kayyem, a former assistant secretary in the department of homeland security, has said.

The second crisis is economic — the challenge of making sure that, while public health experts and medical professionals do what is necessary to save lives, the economy does not continue to spiral downward.  That means using the tools of the federal government, including legislative and executive action.

For this two-part crisis, we need a president with managerial skills who also knows when to defer to subject matter experts and how to navigate political challenges and realities.

Chris Edelson is an assistant professor of government in American University’s School of Public Affairs. He has written two books on presidential power, and recently wrote a book chapter describing the problem of constitutional failure in the United States.

More: The one big difference between Trump and Hoover

Also read: Here’s what Pope Francis said about the global economy that drew a ‘wow’ from a former presidential candidate