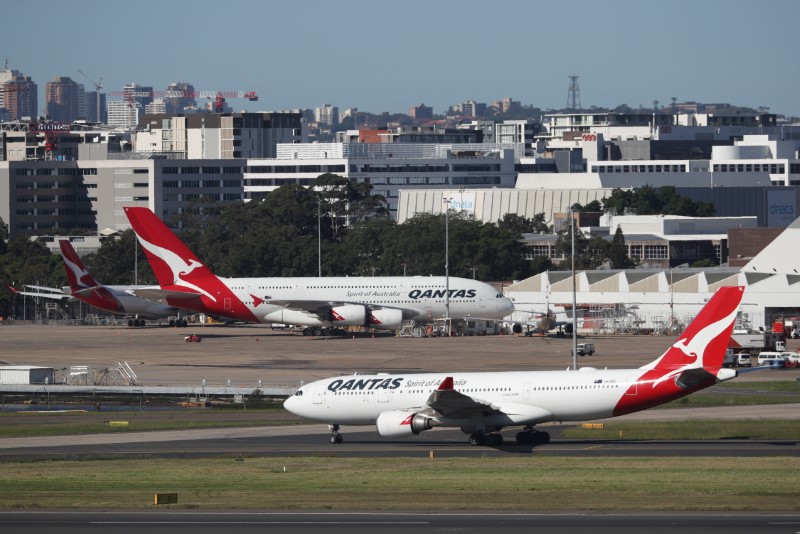 SYDNEY (Reuters) – Qantas Airways Ltd (AX:) said on Thursday it will halt all international flights from late March until at least the end of May and is putting two-thirds of its workforce on leave after Australia told citizens not to travel overseas due to the coronavirus.

Qantas will also delay the payment of its dividend, worth A$201 million ($116.24 million), from April 9 until Sept. 1. Senior executives and the board will take a 100% pay cut until at least the end of the financial year, up from 30% earlier, joining the chairman and CEO in taking no pay.

“This is a terrible day that we have to make these decisions on the survival of the national carrier,” Qantas Chief Executive Alan Joyce told reporters. “I never thought as a CEO I would have to stand down two-thirds of our people and maybe more if this continues this way.”

Qantas needs to slash its A$4 billion a year wage bill due to the drop in revenue and is looking to secure funding against its 787 fleet, with a deal expected to be announced next week, Chief Financial Officer Vanessa Hudson said.

Qantas enters the crisis in a stronger financial position than most airlines globally. Citi analysts said on Wednesday that the Australian airline could withstand six to 11 months of no flying at all before having to resort to further cost base reductions, increasing gearing or raising equity.

“We have one of the healthiest balance sheets out there so we will have plenty of liquidity to last a very, very long time,” Joyce said.

The airline will cut its domestic capacity by 60% and 20,000 workers will not be needed. To preserve as many jobs as possible over the longer term, it is telling staff to use their paid leave and offering other options like leave at half pay and advance leave, though it said leave without pay was inevitable for some employees.

Qantas said it is also talking to partners like Australian retailer Woolworths Group Ltd (AX:), which has seen a surge in sales due to panic buying from consumers worried about the coronavirus, about temporary job opportunities.

Qantas said some ad hoc international flights were possible during the period when it is halting scheduled flights, and it is in talks with the government about continuing some strategic links. It added essential domestic, regional and freight connections will be maintained as much as possible.