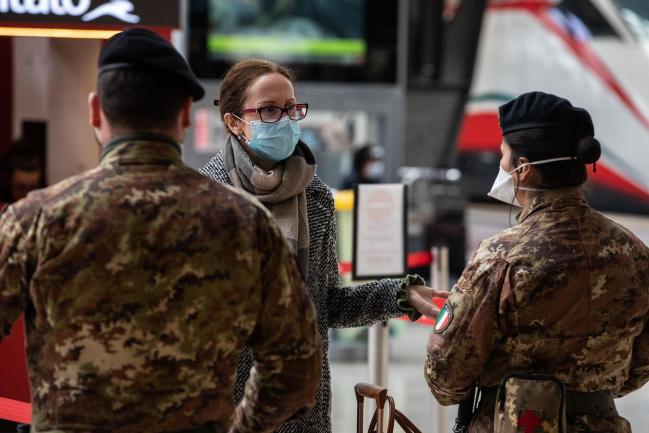 Germany is prepared to abandon its long-standing balanced-budget policy to help contain the economic fallout. The European Central Bank boosted asset purchases and called for “ambitious and coordinated” action by policy makers. China said the peak of the current outbreak in the country is “generally over.”

The rout in global stocks deepened. Treasuries and the dollar surged.

Subscribe to a daily update on the virus from Bloomberg’s Prognosis team here.

Click VRUS on the terminal for news and data on the coronavirus and here for maps and charts. For analysis of the impact from Bloomberg Economics, click here. To see the impact on oil and commodities demand, click here.

The death toll in Italy rose to 1,016 from 827, civil protection officials said on Thursday. The European nation has 15,113 total cases, up from 12,462 previously reported.

The Metropolitan Museum’s three sites in New York City are closing starting on Friday, joining cultural and sports institutions globally that have shut to help slow the spread of the coronavirus. There was no date set to reopen, according to a phone operator.

The coronavirus threatens to exceed health care capacity across the European Union, according to the bloc’s disease prevention office.

Trends across Europe mirror those seen earlier in China, according to the European Centre for Disease Prevention and Control, which called for and “immediate targeted action” to counteract the spread of the disease. The virus has reached all EU countries and the U.K., with a total of 17,413 cases in the region as of March 11, with more than half of those cases in Italy, the agency said.

“In a few weeks or even days, it is likely that similar situations to those seen in China and Italy may be seen” in other countries in the region, the organization said in a statement.

The Democratic debate between Bernie Sanders and Joe Biden will be held in the nation’s capital on Sunday without an audience to reduce the risk of spreading coronavirus.

Large events, especially sports like the NCAA’s March Madness should be put on hold for four to eight weeks until the significance of the outbreak is determined, said Robert Redfield, director of the Centers for Disease Control and Prevention.

Canadian Prime Minister Justin Trudeau is in self-isolation and working from home while his wife, Sophie Gregoire Trudeau, is awaiting the results of a COVID-19 test.

Anthony Fauci, director of the National Institute of Allergy and Infectious Diseases, told lawmakers Thursday that the U.S. testing system for coronavirus is “a failing” and not yet ready to ramp up to test more Americans.

“The idea of anyone getting it easily the way people in other countries are doing it, we’re not setup for that,” he said at a House Oversight Committee hearing.

The Netherlands plans to cancel all events, including sports games and trade shows, attended by more than 100 people for the rest of the month. The move scales up measures announced earlier in the week that targeted only the province hardest hit by the coronavirus outbreak.

At a briefing in The Hague, Prime Minister Mark Rutte said that he sees no reason to close schools. He also said that health officials have noticed new cases that can’t be traced back to a specific source. Dutch Minister for Medical Care Bruno Bruins called on all people with a cold, cough, or fever to stay home, while calling on the country’s residents to work from home as much as possible.

As of Thursday, the Netherlands has 614 confirmed cases, an increase of 111 from the day before, and five deaths.

Dubai’s Emirates is seeking to delay delivery of the last handful of Airbus’s A380 double-decker jetliner it has ordered, as the coronavirus pandemic eviscerates demand for flight. The world’s largest long-haul airline still plans to take the eight remaining A380s and is discussing the timing of the handovers with Airbus, people familiar with the matter said.

Slovakia is closing its borders to non-residents after the number of infections rose to 16 from 10 a day earlier, Prime Minister Peter Pellegrini told journalists in Bratislava. The Czech Republic declared a 30-day state of emergency and barred entry to non-residents from 15 countries.

Carnival (NYSE:) Corp. fell as much as 24% in London after its Princess Cruises unit said it will pause global operations for two months because of the impact of the coronavirus, which has spread on several ships worldwide. Some voyages under way will be completed.

European Central Bank President Christine Lagarde followed through on her pledge to counter the economic shock of the coronavirus outbreak with a stimulus package that included more bond purchases and loans for banks but not an interest-rate cut.

Lagarde called for an “ambitious and coordinated policy response” to counter the economic effects of the virus.

Chancellor Angela Merkel’s administration is prepared to abandon its long-standing balanced-budget policy to help finance measures to contain the economic fallout of the coronavirus. Given the threat of an economic recession from the pandemic, Merkel and her economic team are now willing to accept deficit spending to help finance containment measures, according to people with direct knowledge.

“Americans coming home will be funneled through 13 different airports, they’ll be screened and then we’re going to ask every American and legal resident returning to the United States to self-quarantine for 14 days,” Vice President Mike Pence told CNN.

JPMorgan Chase (NYSE:) & Co. is planning to implement a staggered work-from-home plan for its New York-area employees after the governor asked businesses to help the state slow the spread of the coronavirus.

New York Governor Andrew Cuomo said in an interview on CNN Wednesday he would ask businesses to voluntarily consider staggering shifts for employees and letting them telecommute to help stem the spread of the highly contagious virus. New York cases jumped to 212 on Wednesday after not having a single case less than two weeks ago, according to data from Johns Hopkins University.

Singapore is preparing a second package of support measures as the coronavirus outbreak weighs on the economy, but it isn’t going to lock down the city-state with more stringent measures, according to Prime Minister Lee Hsien Loong.

The city-state will take steps to support firms and workers, Lee said, without providing financial details on the package. The government will assist companies with their costs and cash-flow, while also helping people keep their jobs and retrain them during their downtime, he said.

The U.K. is looking at “a contingency plan” for next week’s trade talks with the European Union in London due to the coronavirus outbreak, Prime Minister Boris Johnson’s spokesman told reporters. There will be a joint EU-U.K. decision on the talks, spokesman James Slack said.

Outgoing CDU chief Annegret Kramp-Karrenbauer said the scheduled April 25 meeting in Berlin will not take place and will be rearranged “as soon as the situation around this epidemic permits it.”

Irish PM Leo Varadkar said schools and colleges will close from 6 p.m. Thursday until March 29, as will cultural institutions. He said mass outdoor gatherings should be canceled, indoor meetings curtailed, and urged people to work form home where possible. Speaking to reporters in Washington, he said stores and cafes can remain open, but urged caution in social settings.

Separately, news agency NTB reported Norwegian schools and kindergartens will also be closed to limit the spread of coronavirus, as part of measures to be announced by Prime Minister Erna Solberg.

Real Madrid, one of the most valuable soccer teams in the world, said its soccer and basket teams will be quarantined, after a basketball player tested positive for coronavirus.

Mallinckrodt is evaluating limited published evidence suggesting a potential role for inhaled nitric oxide to treat Covid-19 associated lung complications. The company is in early discussions with the FDA on the potential to submit a pre-investigational new drug package.

China’s Economy May Not Be Back to Normal Yet (7 a.m. NY)

Early signs of a pick-up in activity had raised hopes that China could help support raw materials demand as it returned to work after virtually shutting down because of the coronavirus. But as the spread of the pandemic to Europe and the U.S. plunges energy markets deeper into crisis, the latest data are a warning to the world’s commodity producers that China’s road to recovery could be a long one.

Iran reported 1,075 new coronavirus cases, bringing the total count in the country to 10,075. The health ministry revealed 75 new deaths in the past day, with 429 total fatalities. The country has asked the International Monetary Fund for $5 billion to help deal with outbreak.

Iran earlier said the virus had probably passed its peak in two of its worst-hit provinces, Qom — where the country’s outbreak started — and Gilan in the northern Caspian Sea region. Iran currently has the capacity to carry at 6,000 coronavirus tests daily, but is hoping to increase that figure to 10,000.

“The coronavirus is a global crisis, not limited to any continent and it requires cooperation rather than unilateral action,” the heads of the European Union’s main institutions said in a statement. “The European Union disapproves of the fact that the U.S. decision to impose a travel ban was taken unilaterally and without consultation,” Ursula von der Leyen and Charles Michel said in a joint statement.

President Trump said he will suspend all travel from Europe to the U.S. for the next 30 days, the most far-reaching measure yet in the administration’s efforts to combat the spread of coronavirus. The restrictions, which will not apply to the U.K., will go into effect Friday at midnight, he said in an Oval Office address.

U.K. Chancellor of the Exchequer Rishi Sunak said there’s no evidence that travel bans and closing borders will stop the spread of coronavirus. Prime Minister Boris Johnson will chair a meeting of the U.K. government’s emergency committee Thursday afternoon, and his office said he’s likely to announce that the virus response is moving to the “Delay” phase.

Coronavirus Can Live in Patients for Five Weeks After Contagion (6:29 a.m. NY)

Patients keep the pathogen in their respiratory tract for as long as 37 days, a new study found, suggesting they could remain infectious for many weeks. In yet another sign of how difficult the pandemic may be to contain, doctors in China detected the virus’s RNA in respiratory samples from survivors for a median of 20 days after they became infected, they wrote in an article published in the Lancet medical journal.

WHO’s special envoy on Covid-19 David Nabarro warned there could be some “very serious problems” in the U.S. and that the country should pay careful attention to what’s happening domestically, to ensure the outbreak is understood.

A spokesperson for China’s National Health Commission earlier said the peak of the current outbreak in the country is “generally over.” Speaking at a briefing in Beijing, spokesperson Mi Feng said that China would stick with its prevention and control efforts.

In a few dizzying hours, America went from mostly being able to ignore the new coronavirus to finding it inescapable. On Wednesday evening, Hollywood superstar Tom Hanks revealed he had the virus. Around the same time, the National Basketball Association suspended the season after one of its own got a preliminary positive diagnosis. Together, the announcements brought the now global epidemic to the heart of America, targeting two of its biggest havens in times of crisis: entertainment and sports.