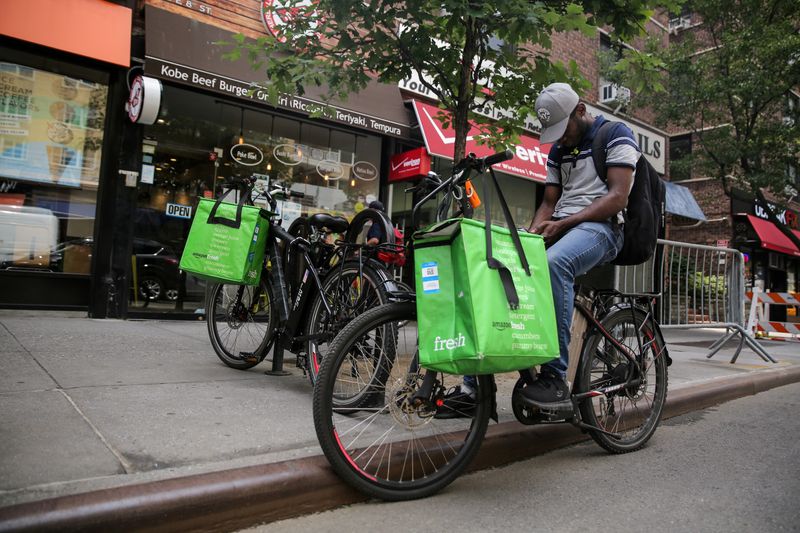 NEW YORK (Reuters) – Leaving bags of food on doorsteps or texting your delivery driver a picture of where you want your meal dropped off – these are new methods for U.S. consumers to get their orders as the coronavirus spreads.

The virus led McDonald’s Corp (N:), Starbucks Corp (O:) and other companies in China, where the outbreak originated, to broaden their use of contactless delivery last month as consumers were stuck at home, often in locked-off apartment complexes.

Now, that concept is growing in other parts of the globe along with the illness.

On Friday, San Francisco-based Postmates introduced no-contact delivery options in its app in all of the 4,200 U.S. cities in which it operates.

“We think it is a way to make both customers and the fleet comfortable while making and receiving deliveries,” the company said in a statement.

Postmates users got an email notifying them of the new service called Dropoff Options. Three choices pop up when a customer places an order – delivery to the door, leave it at the door, or meet the customer outside – for “whether you’re feeling under the weather or are working from home in your pjs,” the email said.

DoorDash is also testing enhanced drop-off options for contactless delivery to be rolled out shortly and is reminding consumers that they can leave instructions for drivers in the app, which can include a photo of the spot where food should be placed.

The COVID-19 virus has infected more than 111,600 and killed more than 4,000 people globally, largely in China, according to a Reuters tally.

In the United States, more than 700 people have been infected and 27 people have died. Last week, new cases spread quickly from just a couple states to a majority of states.

Technomic Inc, a consulting and research firm, found that more than 30% of U.S. consumers said they plan to not leave the house or go to restaurants as often, though only 13% of those people said they will order more delivery. The report surveyed 1,000 consumers from Feb. 28 to March 2.

“The reduced foodservice visit incidence could be a boon for the grocery business, as almost half of these consumers say they will stockpile grocery foods and beverages as a substitute for away-from-home meals,” the firm said.

In Europe, German supermarket chain REWE said that a significant increase in demand has led to longer online delivery times since it has limited delivery slots and drivers are already fully loaded.

British online supermarket Ocado (LON:) has advised customers to place orders further in advance because of “exceptionally high demand,” indicating a possible reaction from shoppers to the spreading coronavirus outbreak.

Dutch online grocer Picnic BV has been getting more and larger orders and is “at about 20% beyond capacity,” Chief Executive Michiel Muller told broadcaster RTL.

U.S. delivery companies contacted by Reuters will not say whether they are yet seeing any increase in demand.

But one driver for DoorDash Inc in the Washington, D.C. area said his shifts had gotten busier.

The driver, who did not want to be named, said his pay per delivery – which usually rises during busier times or bad weather – has also steadily gone up as coronavirus cases grew.

His average pay per order rose from about $3.20 in mid-February to $4.72 during the last week of the month, though it was $4.37 during the first week of March, according to screenshots of his driving stats.

People are scared to go to restaurants, he said.