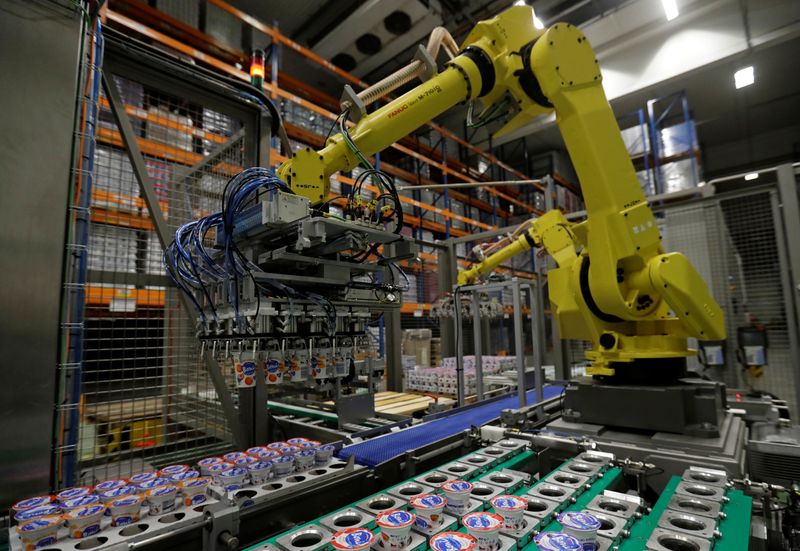 By Gergely Szakacs and Jason Hovet

KOSZARHEGY, Hungary (Reuters) – Istvan Simon’s factory in western Hungary churns out more than a million plastic parts a day but on a busy morning in one of its large production halls there is only the sound of machines clicking and whirring. Workers have all but disappeared.

Similar transformations are underway on production lines across the European Union’s eastern wing as surging wage bills undermine the region’s reputation as a cheap production base. Factory owners from Hungary to the Czech Republic and Poland find themselves with little choice but to invest in the automation of their manufacturing processes if they want to remain competitive.

Manufacturing in the region has boomed since the EU expanded eastwards in the mid 2000s, with companies such as automakers Audi (DE:) and Daimler (DE:) opening local production lines and spawning supplier ecosystems, but more recently strong economic growth has led to a shortage of workers and rising wages.

“We can see human labor being replaced with machinery and artificial intelligence,” Hungarian union leader Zoltan Laszlo said. “Not just in the car sector … but also in the steel and machinery industries.

“Such investments can already be seen in these sectors, leading to job losses. You need to glue numerous tiny slivers together and all of a sudden you get the big picture.”

Employment figures are one indication the region’s industry may be at a turning point.

While Hungary’s economy grew nearly 5% last year and manufacturing investments rose at the fastest pace in three years, the sector shed nearly 23,000 jobs, ending a six-year run of annual employment growth. Czech data showed a year-on-year loss of almost a thousand manufacturing jobs in the third quarter of 2019, suggesting employment in the sector could have declined for the first time since 2013 over the full year.

“There are no operators in this hall right now,” said Peter Simon, chief executive of Simon Plastics, as he overlooked a line of machines making plugs for car parts, a key product line at the company founded by Istvan, his father, 35 years ago.

“Wages are going up, the prices of robots are coming down, so this is the way to get returns,” he said. Looking to expand output but pressured by surging wages and falling prices, all of the company’s recent 1 billion forint ($3.32 million) investment was spent on automation.

The company hasn’t cut any of its 400 jobs so far, finding other positions for those whose work has been replaced by robots, but it intends to automate its remaining manual work after a 50% jump in operator wages over the past three years.

Although the automation process has so far been a gradual one, Josef Stredula, head of the Czech-Moravian Confederation of Trade Unions, said based on various estimates up to 10% of jobs could disappear.

“Big changes are awaiting us,” Stredula said, adding that while automation may ease the burden of heavy or repetitive manual work it was important to ease the transition, for example by retraining affected workers.

“We have to do everything to make the future not so bleak but relatively easier for everyone.”

Staffing company Hays (L:) recently noted that the average annual wage increase in the Czech Republic, Poland and Hungary of around 10% was far higher than in many western countries and estimated that almost 5% of Hungarian jobs, or 200,000 roles, could be fully automated over the next decade.

Hungarian recruitment portal profession.hu registered an 11% fall in manufacturing sector job postings last year. In the Czech Republic, Grafton Recruitment has seen a similar drop, while consultancy Deloitte has estimated around half of current jobs could be replaced by machines.

“It is only a question of when it will be more economical for most companies to start with automation on a much bigger scale,” said David Marek, Deloitte’s chief economist in Prague.

NOT BLACK AND WHITE

At a distribution center near Prague, Czech yoghurt maker Hollandia Karlovy Vary installed three robotic arms last year to sort and load yoghurts onto pallets, replacing the work of 10 people who were moved to other positions.

Judit Kovacs, a manager at human resources company Randstad (AS:), said factories with high capacity utilization in western Hungary had started reducing headcount by attrition over the past year, while new plants in eastern Hungary were being planned with a high degree of automation as investors looked to curb their labor market exposure.

It’s not only manufacturing that is falling to the machines, insurance company Allianz’s (DE:) Hungarian unit, for example, is automating data processing to offset rising wage costs.

The International Federation of Robotics (IFR) expects robot sales in major Eastern European economies to rise through 2022 but although it acknowledges that some jobs will disappear, it does not foresee a major net effect on employment.

“The question is not do I invest in manual labor or automation,” IFR General Secretary Susanne Bieller said, explaining that automation could help companies maintain a competitive edge over cheaper production hubs elsewhere in the world.