Home
Stocks
Need to Know: The Fed is already behind the curve as Goldman says firepower could be half as much as usual
Prev Article Next Article

Would the Federal Reserve ever do two inter-meeting rate cuts? Because the central bank is already behind the market as traders gobble up government bonds.

The action in bonds has been stunning. The yield on the 10-year Treasury TMUBMUSD10Y, 0.794% — the security that underpins valuation of pretty much every asset — fell 15 basis points to 0.77%. The yield on the 2-year Treasury TMUBMUSD02Y, 0.496% is now a full half-point lower than the federal-funds rate the Fed targets. Yields move in the opposite direction to prices.

“In essence, the markets are expecting the Fed to keep lowering interest rates, signal that there’ll be further rate cuts, and confirm that it has no intention of unwinding those cuts, even if the economic conditions were to improve. It’s fair to say that this is an extremely difficult ask; the path ahead for the Fed will likely be tricky, with plenty of scope for policy errors and miscommunication,” said Frances Donald, global chief economist and head of macroeconomic strategy at Manulife Investment Management.

David Mericle and Alec Phillips, economists at Goldman Sachs, ponder what the Fed could do if it brought interest rates to zero, given that several policy makers have said they are not interested in joining the European Central Bank in setting negative interest rates. “Forward guidance would likely be tied to unemployment and inflation targets; guidance offering a lengthy calendar commitment to stay at the lower bound is probably less appealing because of the extremely high level of uncertainty about the future spread and economic impact of the virus,” they said.

The Goldman economists say the Fed could buy more Treasurys and, at the very least, end the runoff of mortgage-backed securities if not buy more outright. Current legal powers don’t allow the Fed to buy stocks, and only a limited scope of corporate bonds. 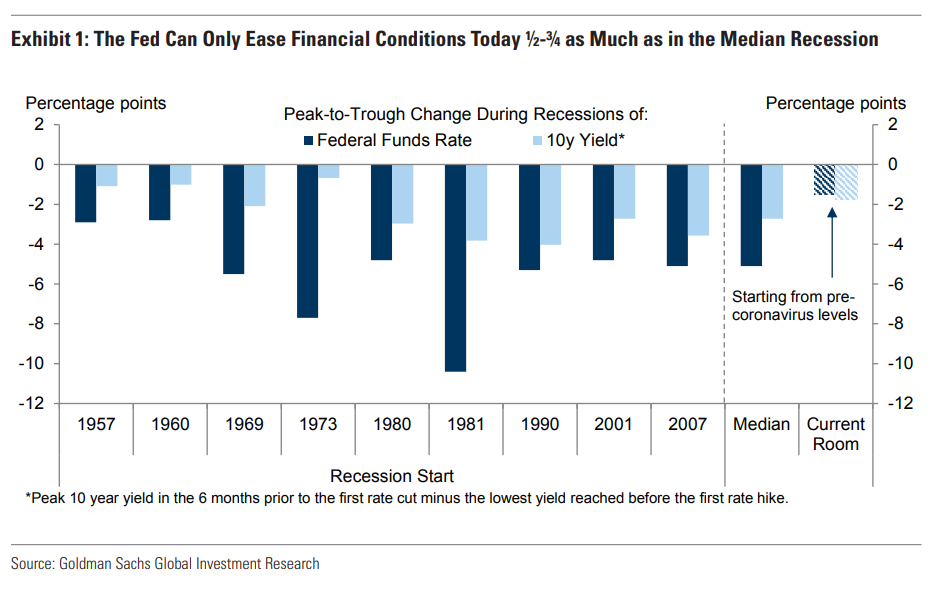 And what would all this activity do?

Well, not much. Their analysis is the Fed could provide roughly half to three-quarters of the impact of a typical easing in past recession.

“Starting from January levels before coronavirus fears hit and including the actions already undertaken, the Fed can lower the funds rate by 150bp and depress 10-year yields by 175bp at the very most,” they say.

Fed officials are due to speak on Friday, and New York Fed President John Williams on Thursday night did nothing to dissuade expectations of further easing. “In the weeks and months ahead, we will continue to closely monitor developments and their implications for the economic outlook. We will use our tools and act as appropriate to support the economy,” he said. Williams added the Fed is in “close alignment” with international central banks.

The Labor Department will release its nonfarm payrolls report. The U.S. likely added a healthy 165,000 new jobs in February after a preliminary 225,000 gain in the first month of the year, according to economists surveyed by MarketWatch. Whether the data will matter is another story.

“If the report is solid, markets will discount it as a backwards-looking indicator. If disappointing, it will be seen as further evidence of downside risks building in the U.S. economy,” said currency analysts at ING.

Russia, as of Friday morning, had not signed off on the Organization of the Petroleum Exporting Countries oil cartel plan to reduce supply by 1.5 million barrels a day.

According to the Johns Hopkins tracker, there are 98,704 confirmed cases of COVID-19 world-wide, including 233 in the U.S. Coronavirus test results were expected on Friday for some passengers and crew aboard a cruise ship anchored near San Francisco.

CNBC editor Rick Santelli has a unique, if dangerous, proposal to counter the economic impact of the coronavirus outbreak.

A potential cure for peanut allergies may lie in the gut.