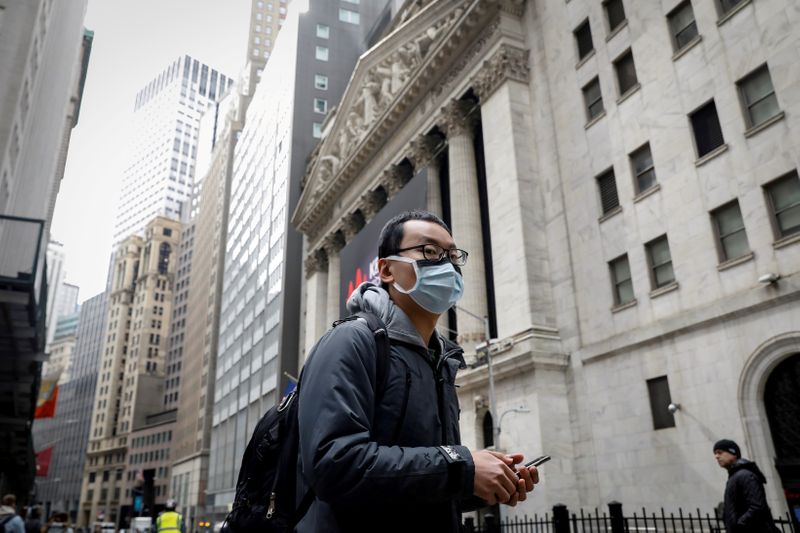 © Reuters. FILE PHOTO: A man wears a mask on Wall St. near the NYSE in New York

LONDON (Reuters) – Traders at the world’s biggest banks are swapping their plush city center offices to work from suburban outposts in New York and London, facing lengthy commutes as their employers attempt to reduce the disruption caused by coronavirus.

Disaster recovery sites in Greenwich, Connecticut in the United States and Northolt in Britain are currently being tested by Goldman Sachs Group Inc (N:) and Barclays (L:), with entire teams working in sales and trading already heading to the suburbs, several sources told Reuters.

“This is happening as we speak. It’s a test disguised as a real move to prevent contagion,” said a source familiar with the matter, speaking on condition of anonymity as the plans are confidential.

The number of those in transit is expected to rise in the coming weeks as regulation – along with complex technology and the need for high-speed connections – means trading desks cannot operate remotely.

HSBC on Thursday sent 100 staff home from its Canary Wharf headquarters in London, after a worker tested positive for the coronavirus, the first known case at a major company in Europe’s main financial hub.

JPMorgan Chase & Co (N:) was the first bank to activate contingency plans and split its sales and trading staff between central locations in London and New York and secondary sites in Basingstoke – about 50 miles (80 km) from its London base – and New Jersey.

For traders who have early morning starts, it means resetting their alarms and traveling for an additional 30 to 45 minutes on average.

Most traders feel the precautions are useless as hundreds of people are still expected to work in the same office and it only takes one to spread the virus. They note no one is checking temperatures.

But banks argue that scattering staff and traveling away from central areas will help them minimize the risk of contagion.

Some Barclays staff working at the bank’s Northolt site – about 13 miles from central London – have complained to colleagues about the longer commute and the increased risk of catching the virus while traveling.

In the United States, Goldman Sachs has secondary offices in both Greenwich, Connecticut, and Jersey City, New Jersey.

Goldman’s Jersey building is located 10 to 15 minutes by ferry from its existing New York base, making it the destination of choice for most of its traders.

In Britain, Goldman has been testing a facility in Croydon, on the outskirts of London.

Morgan Stanley (N:) and Citigroup Inc (N:) are testing UK sites near London’s Heathrow Airport and the southeast district of Lewisham, respectively, and have yet to decide whether to shift staff.

None of the banks intends to arrange bus or coaches to make the commute easier, the sources said.

JPMorgan expects the bulk of its moves to happen on March 9 and has informed traders that line managers would privately disclose their new destination and this would become their daily office until further notice.

“You’re just expected to get there,” said another source familiar with the changes.

“They are not buying out hotels or anything… at best you get reimbursed for your taxi ride.”