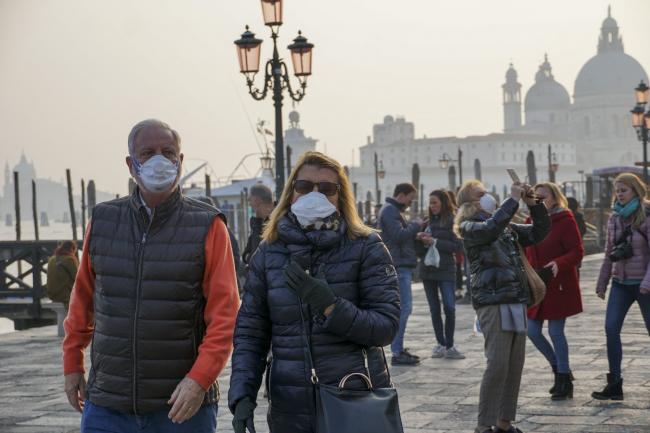 (Bloomberg) — The spread of the coronavirus outbreak to regions from Italy to Iran sparked concerns about a pandemic, with the number of cases worldwide topping 80,000.

Global stocks tumbled after Italy reported at least six deaths and more than 200 confirmed cases. The U.S. Centers for Disease Control and Prevention warned Americans to avoid non-essential travel to South Korea. The North Asian nation reported another 60 cases, bringing its total number of infections to 893.

China’s death toll rose to 2,663, an increase of 71. Total coronavirus cases on the mainland climbed to 77,658 as Hubei reported 499 additional infections. The country’s Civil Aviation Administration said it will continue to ban flights to and from the province.

While the head of the World Health Organization called the new cases “deeply concerning,” he said the outbreak isn’t yet a pandemic. The WHO also said that Gilead Sciences Inc (NASDAQ:).’s experimental drug that is being tested for coronavirus may be the only one that will work.

Click VRUS on the terminal for news and data on the coronavirus and here for maps and charts. For analysis of the impact from Bloomberg Economics, click here.

A fourth passenger from the Diamond Princess cruise ship in Japan has died, NHK reported.

The patient was in his 80s and had the coronavirus, according to NHK. Three others from the ship have also died, though pneumonia was cited as the cause of one of the deaths.

The cruise ship that was quarantined for 14 days off of Yokohama has been the source of about 700 infections.

The Trump administration said it has asked Congress for $2.5 billion in supplemental funding to battle the spread of the coronavirus. More than $1 billion of the money would be go toward creating, manufacturing and distributing a vaccine, according to a person familiar with the matter.

The money would also be used to “support preparedness and response activities and to procure much needed equipment and supplies,” said Rachel Semmel, a spokeswoman for the Office of Management and Budget.

About 26% of Temasek’s holdings were in China as of March 2019, including multibillion-dollar stakes in Alibaba (NYSE:) Group Holding Ltd. and Industrial & Commercial Bank of China Ltd. With the money saved, Temasek said it will donate to staff volunteer initiatives and support the community as needed through unspecified measures.

Fujifilm Holdings Corp. rose as much as 8.8% on Tuesday after Japan’s health minister said the country plans to recommend its Avigan drug to treat coronavirus.

The U.S. Centers for Disease Control and Prevention warned Americans to avoid all non-essential travel to South Korea as the novel coronavirus is spreading widely throughout the community there.

Older adults and people with chronic medical conditions may be at increased risk from the pathogen, and there is limited access to adequate medical care in affected areas, the agency said. The level 3 warning, the CDC’s highest, matches the caution it previously placed on China.

Singapore Airlines will make more temporary adjustments to flights across its network due to weak demand because of the coronavirus outbreak, the company says on its website. The adjustments will result in a 7.1% reduction in scheduled capacity from February to the end of May.

South Korea’s consumer confidence plunged the most in five years as coronavirus spreads quickly in the country, blunting the momentum toward economic recovery.

The index slid 7.3 points in February to 96.9. The fall is the largest since June 2015, when another type of coronavirus — Middle East Respiratory Syndrome — hit the Korean economy.

The number of coronavirus cases in South Korea has soared over the past week, rising from just dozens to almost 900, making it the most-infected country outside China. President Moon Jae-in has raised the infectious-disease alert to the highest level for the first time since 2009.

United Airlines Holdings Inc. withdrew its 2020 profit forecast, citing the financial impact of the coronavirus outbreak. The uncertainty surrounding the virus means United can’t guarantee its earlier goal of earning $11 to $13 a share this year, according to a company statement Monday.

If the outbreak runs its course by mid-May and travel patterns return to normal in the coming months, the earnings target is still within reach, United said.The airline’s caution underscores the worsening financial drag as the spread of the new coronavirus stymies global travel.

Separately, Mastercard Inc (NYSE:). lowered its forecast for revenue growth in the first quarter as the coronavirus curbs international travel.

There are now 53 people in the U.S. with the novel coronavirus, the Centers for Disease Control and Prevention said Monday

The American cases include 12 people who tested positive for the condition known as Covid-19 after traveling to areas where the virus is spreading widely. Additionally, two spouses of people in that group contracted it from direct human-to-human transmission.

Three others were diagnosed after being repatriated from Wuhan, China, the outbreak’s epicenter, on State Department flights, while 36 had previously been aboard the contaminated Diamond Princess cruise ship.

The Professional Women’s Hockey Players Association postponed a three-game series in Japan as a result of the virus. A collection of North American players was scheduled to spend a week in Japan and play three exhibitions against the Japanese national team in Tokyo. The teams are hoping to reschedule for later this year or early next year.

Elsewhere, the Overwatch League, a competitive video-gaming circuit operated by Activision Blizzard Inc (NASDAQ:). canceled three weeks of matches in South Korea, including home games for its Seoul Dynasty franchise. The league said the events will be rescheduled, and possibly relocated, for a different date.

The increase in the number of cases in Italy, Iran and South Korea is “deeply concerning,” the head of the World Health Organization said at a press briefing in Geneva.

Countries need to do everything they can to prepare for a potential pandemic, Director-General Tedros Adhanom Ghebreyesus said. The disease hasn’t reached that stage, which is defined by an uncontrollable geographical spread.

The coronavirus outbreak in northern Italy shows that the virus “can also spread in Germany,” German Health Minister Jens Spahn said in Berlin.

While the virus may become a global pandemic, Germany is very well-prepared because its health system is one of the best in the world, Spahn said.

The Trump administration’s top economist called the coronavirus a “real threat” this year, but said it’s too early to tell how seriously it will affect the U.S. economy.

Tomas Philipson, the acting director of the Council of Economic Advisers, said that at the moment seasonal flu has a greater impact in the U.S. He said the White House will continue to monitor the outbreak.

WHO Says Gilead’s Remdesivir May Be Only Drug for Virus (8 a.m. NY)

Gilead’s experimental drug may be the best bet to find a treatment for the new coronavirus, Bruce Aylward, an assistant director-general at the World Health Organization, said at a briefing in Beijing.

Gilead’s compound, remdesivir, has been rushed into a clinical trial in China. WHO officials have said results could be available within weeks.

China’s unprecedented lockdown and restrictions may have blunted the coronavirus’s spread and averted hundreds of thousands of cases, according to a team of medical experts that visited the outbreak’s epicenter last week. Fewer patients are crowding hospitals in Wuhan and are consulting doctors for fevers, Bruce Aylward, an assistant director-general at the World Health Organization, said in Beijing.

But the outbreak could gain ground again as schools reopen and work resumes, Aylward warned. More broadly, he called for China’s experience in turning around the outbreak to help battle the virus elsewhere.

To contact Bloomberg News staff for this story: Michelle Fay Cortez in Minneapolis at mcortez@bloomberg.net

To contact the editors responsible for this story: Rachel Chang at wchang98@bloomberg.net, Jeff Sutherland, Adam Majendie