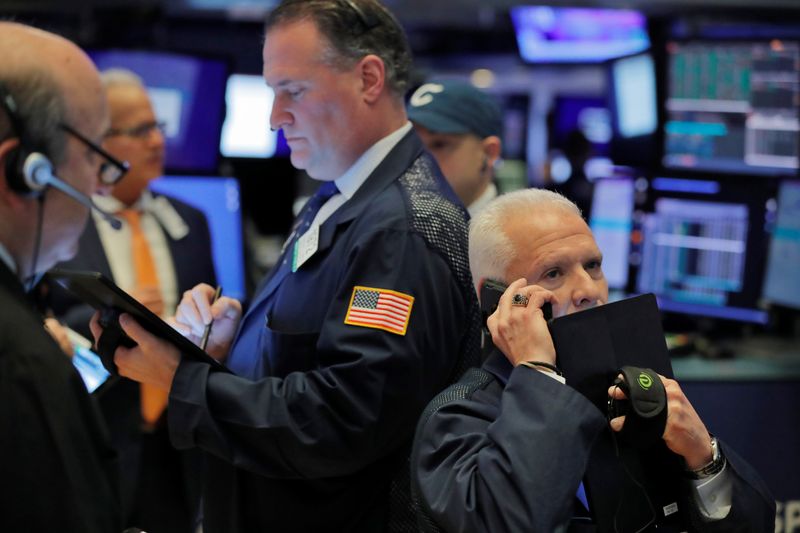 © Reuters. Traders work on the floor of the New York Stock Exchange shortly after the opening bell in New York

NEW YORK (Reuters) – U.S. stocks sold off on Friday as a spike in new coronavirus cases in China and other countries and as data showing U.S. business activity stalled in February fueled investors’ fears about the economy.

China reported a jump in new cases on Friday, while South Korea became the latest hot spot with 100 new cases and more than 80 people tested positive for the virus in Japan.

“It’s creating a wild card,” for companies and others, said Peter Tuz, president of Chase Investment Counsel in Charlottesville, Virginia. “Going into a weekend not so long after the stock market was hitting highs, people are taking some money off the table.”

The impact could extend beyond the first quarter, he said.

Apple (O:) earlier this week warned on sales due to the impact of the virus outbreak.

The IHS Markit Purchasing Managers’ index of services sector activity dropped to its lowest level since October 2013, signalling a contraction for the first time since 2016. The manufacturing sector also clocked its lowest reading since August.

Hopes of monetary easing by major central banks had propelled the benchmark S&P 500 () and the tech-heavy Nasdaq () to all-time highs earlier this week, but the indexes are on course for their first weekly decline in three weeks.

Among other stocks, Dropbox Inc (O:) jumped after it raised its outlook for operating margin, and Deere & Co (N:) rose after an unexpected rise in first-quarter profit.

Declining issues outnumbered advancing ones on the NYSE by a 2.13-to-1 ratio; on Nasdaq, a 2.23-to-1 ratio favored decliners.