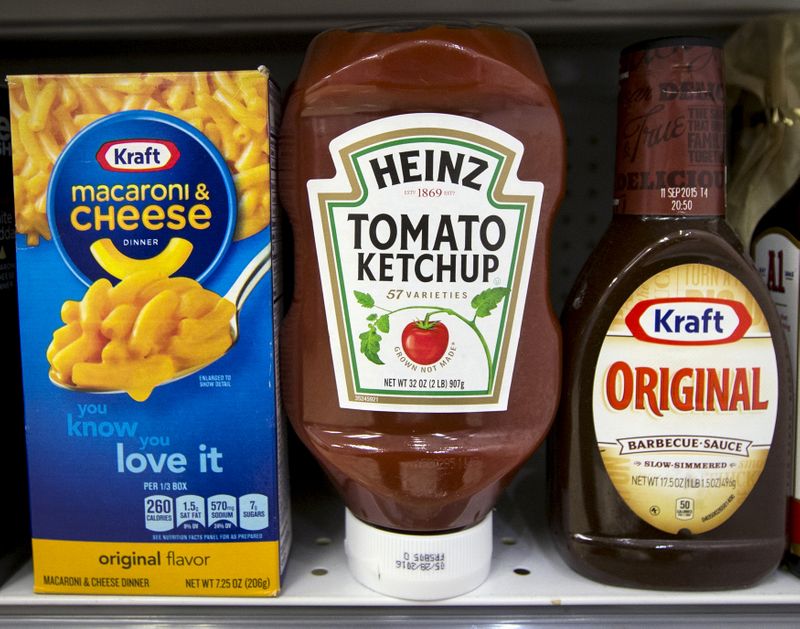 © Reuters. A Heinz Ketchup bottle sits between a box of Kraft macaroni and cheese and a bottle of Kraft Original Barbecue Sauce on a grocery store shelf in New York

WASHINGTON (Reuters) – A U.S. judge in Illinois on Friday granted a partial win to Kraft Heinz (NASDAQ:) and Mondelez (NASDAQ:) in the foodmakers’ battle with the U.S. Commodity Futures Trading Commission over a $16-million settlement agreed last year.

The foodmakers had agreed in August to pay the penalty to CFTC to settle a wheat manipulation case dating back to 2015, in a deal in which both the firms and the regulator agreed to a gag order.

The companies said the CFTC’s statements at the time violated the terms of the agreement. CFTC said Kraft and Mondelez had driven up prices of wheat by buying up futures to create the illusion of strong demand, yielding the companies more than $5 million in profits.

Kraft Heinz and Mondelez asked a Judge in the Northern District of Illinois to hold the CFTC and the commissioners in contempt of court, among other requests, which were redacted.

Judge John Robert Blakey in Chicago said he would grant them “in part” “given the egregious misconduct” by the CFTC, a filing showed. Because of the redacted motions, parts of the companies’ requests were unknown.

The case centered on misconduct in the wheat market, trading in Chicago.

The companies at the time said they strongly disagreed with CFTC’s statement, which “blatantly violate and misrepresent the terms and spirit of the consent order.”

Representatives for the CFTC, Kraft Heinz and Mondelez did not respond immediately to requests for comment.