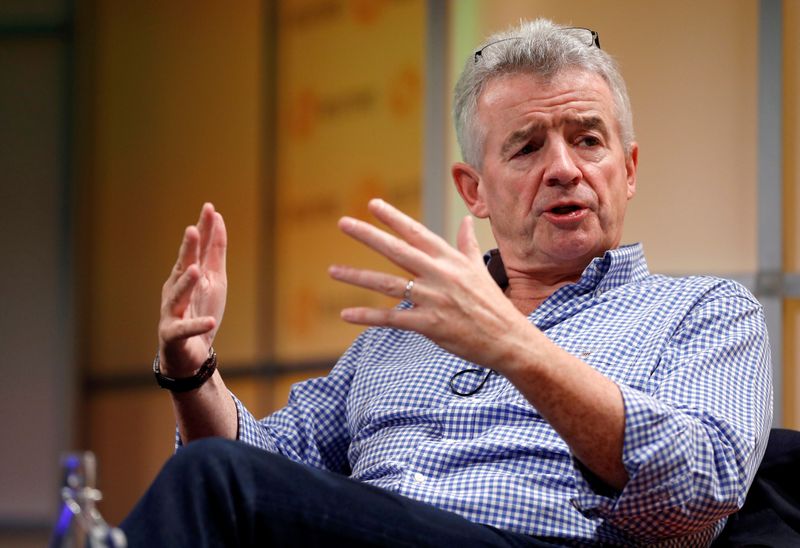 DUBLIN (Reuters) – Ryanair (I:) may have to push back its long-term target of flying 200 million passengers per year by as much as two years due to delays in the delivery of Boeing’s (N:) 737 MAX jet, Europe’s largest low-cost carrier said on Monday.

Ryanair, one of the biggest customers of the grounded jet, with 210 on order, hopes to have its first 55 jets flying by summer 2021, a year later than originally planned, with 50 more planes per year due for each of the following three summers.

But Chief Executive Michael O’Leary suggested Boeing’s delivery schedule could ultimately be up to two years late – meaning it may hit its long-term 200 million passenger target by March 2026 rather than March 2024.

“What is likely is they will push out that delivery profile with Boeing by at least 12 months,” O’Leary said in a pre-recorded video presentation in which he was asked about the impact of Boeing’s decision to temporarily halt the production of the MAX.

“At best that means we will have to roll forward our plans to fly 200 million passengers per year … by at least 12 months, possibly 24,” he said.

Chief Financial Officer Neil Sorahan, asked by Reuters if there was any risk to its plans to take delivery of 55 planes by next summer, said: “I don’t believe so, but we have been disappointed before.”

Boeing in January said it did not expect the MAX, which was grounded after two fatal crashes, to return to service until mid-2020.

Ryanair, which does not take deliveries during its summer peak of June-August, said on Monday it did not expect to receive the first MAX jets until September or October 2020.

It will take a maximum of eight planes per month, or around 50 deliveries per year, O’Leary said.

The 737 MAX, Boeing’s fastest-selling aircraft, was grounded in March after 346 people died in two crashes attributed to the plane’s anti-stall software.

The executives were speaking after Ryanair reported profit after tax of 88 million euros ($97.63 million) for the three months to the end of December, the third quarter of its financial year, with average fares up 9% and revenue for optional extras like pre-booked seating up 21%.

The release came weeks after Ryanair raised its profit forecast to between 950 million and 1.05 billion euros ($1.17 billion) for its financial year to the end of March, versus the 800 to 900 million euro range it forecast in November, citing a better-than-expected performance over Christmas and New Year.

Analysts said the delay of MAX deliveries has reduced capacity in Europe, pushing up fares.

“The performance was even stronger than we had forecast,” Liberum analyst Gerald Khoo said in a note.

Ryanair said the MAX delays had forced it to close a number of loss-making winter bases, leading to some crew redundancies in Spain, Germany and Sweden, but CFO Sorahan said the number of redundancies was very small.