Home
Stocks
Market Extra: Bernie Sanders’ surge in the polls could hit the S&P 500 with Iowa Caucus vote due this week, analysts warn
Prev Article Next Article
This post was originally published on this site 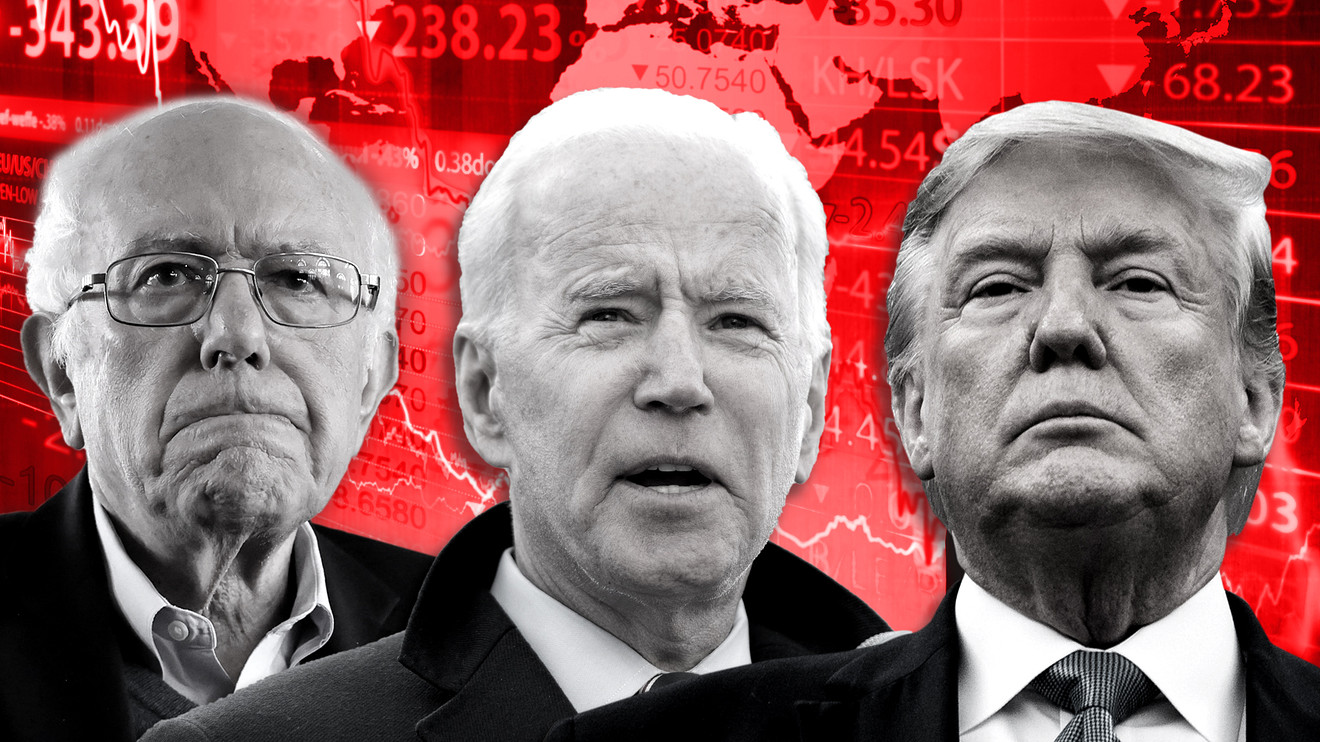 Bernie Sanders rise in the polls for the 2020 U.S. presidential election this winter has been accompanied by equally impressive gains in the stock market, at least before last week’s selloff, and the recent volatility could be a taste of what’s to come if his star continues to rise, analysts told MarketWatch.

The Vermont senator’s popularity with Democratic primary voters sank to nearly its lowest level during the 2020 election cycle on Oct. 17 of last year, according to an average of polls compiled by Fivethirtyeight.com. On that date, he was the favorite candidate of just 14.6% of the Democratic electorate, with former Vice President Joe Biden in first with 27.4% and Massachusetts Senator Elizabeth Warren in second at 23.1%.

Since that date, Sanders popularity has surged nearly 7 percentage points, and he has cut Biden’s lead to roughly 5 points as Warren’s poll numbers show her in a distant third. Despite last week’s selloff, the U.S. stock market has also performed well during this stretch, with the S&P 500 index SPX, -1.77%  up more than 9%, the Dow Jones Industrial Average DJIA, -2.09%  advancing nearly 5% and the Nasdaq Composite index COMP, -1.59%  up more than 12%, after all three indexes hit record highs.

Though Biden still maintains a lead in national polls, surveys of key primary contests, including Monday’s Iowa Caucuses and the New Hampshire primary on Feb. 11 show Sanders tied with Biden or in the lead, and victories there could move investors attention to his policy proposals, like a Medicare-for-all plan that would ban private health insurance and a prohibition against fracking to extract oil and natural gas, which could crimp corporate profits.

“Until next week it’s been just talk, but now we’re going to get some data on where Sanders stands,” Michael Arone, chief market strategist at State Street Global Advisors told MarketWatch. “Market prices do not reflect a Sanders nomination, investors don’t think he’ll win.” If Sanders does win the Iowa contest, “You may see markets react with volatility, especially in sectors like health care and energy,” he added.

Arone also pointed to polls in California, where Sanders has recently surged to lead Biden by a 25.8% to 21.0% margin, according to a Real Clear Politics polling average. “Super Tuesday will be key,” he said, referring to March 3, when 16 primary elections for the Democratic party presidential nomination will be held and nearly 35% of the total primary delegates will be awarded. The California contest alone will decide the proportional distribution of 415 delegates, with candidates needing to win 1,990 delegates to secure the nomination.

That said, the data show Biden remains a slight favorite to win the Democratic party nomination for president, and a stronger-than expected showing by the former Vice President in Iowa would likely be welcomed by equity markets. “Obviously there’s a moderate-versus-progressive thing going on here,” said Dave Lafferty, chief market strategist at Natixis Investment Managers. “The market would prefer Biden to Warren or Sanders.”

Another important factor in how markets digest the growing chances of Bernie Sanders winning the Democratic nomination is the change in the perceived chances of President Trump beating him in the November general election.

“An uptick in presidential approval ratings has coincided with a rise in the prediction market-implied probability that President Trump is reelected in November. RealClearPolitics shows a net approval rating of -7 percentage points for President Trump, up from -12 percentage points three months ago,” wrote Ben Snider, equity analyst at Goldman Sachs, in a Thursday not to clients.

“During that period, prediction market chances of a Democratic presidential victory have declined from 55% to 49%,” he added. Nonetheless, market odds, polls, and historical predictors all continue to indicate a close race for the White House, as does the large options market-implied S&P 500 move around Election Day.”

President Trump’s ongoing impeachment trial in the U.S. Senate could play an important factor in the trajectory of his approval numbers. Though its highly unlikely the president will be removed from office, the impact of further revelations respecting his interactions with the Ukranian government could make his reelection more unlikely.

“The issue now is the residual damage inflicted on Trump and the GOP,” argued Greg Valliere, chief U.S. policy strategist at AGF Investments. “The public increasingly senses a sham trial, and the Bolton book tour won’t be pretty for the White House,” referring to former National Security Advisor John Bolton, who has alleged that the president personally told him that the White House would refrain from disbursing $400 million in congressionally mandated military aid to the Ukraine until the government there publicly announced an investigation into political rival Joe Biden.

It may be too soon to say what the electoral impact of this unfolding story will be, but even in the case of a Sanders victory in November, Natixis’ Lafferty argued that a Democratic takeover of the Senate is less likely that a White House victory, an opinion shared by betting markets and veteran political observer Larry Sabato.

A Republican Senate would almost certainly be a bulwark against many market-unfriendly policies, Lafferty argued, like a reversal of the 2017 corporate tax cuts, Medicare for All, or sweeping new restrictions on carbon emissions. “There will continue to be sand in the legislative gears.”

But uncertainty will loom nevertheless, as there are many potential actions a president can take through executive order that could have market impact, with the Washington Post reporting Thursday that Sanders is considering a wide range of orders, including lifting restrictions on U.S. imports of prescription drugs from Canada and banning the export of crude oil.

All of which means, according to State Street’s Arone that “the market may face an uncertainty discount going forward.”

Monday’s Iowa Caucuses will be just the first in a series of potentially market-moving events this coming week, including the release of Markit and ISM’s manufacturing purchasing managers indexes, also due on Monday, along with data on U.S. construction spending.

Tuesday will feature data on factory orders, while investors will get a reading of the health of the services sector, in the form of the ISM non-manufaturing activity index, on Wednesday. On Thursday, data on weekly jobless claims, productivity and unit labor costs will be delivered, while Friday will feature the closely-watched jobs report for January.